To demonstrate the potential of drone data on a live civil engineering project, 3DR enlisted the help of Autodesk to work on Arizona’s Pinto Creek Bridge

Built in 1949, the Pinto Creek Bridge is a historic crossing on Highway 60, an hour and a half east of Phoenix, Arizona at the foothills of the Tonto National Forest. Built as part of President Roosevelt’s public works initiative, the steel arch bridge sits atop a steep ravine offering scenic views of the surrounding countryside.

With over six decades of use, however, the bridge has started to show its age. Inspections and appraisals have returned poor ratings, and the bridge was considered “structurally deficient” in a 2014 review.

Though the bridge is still open and in use, its decay led to the decision to replace it. Because there are no easy detours on this roadway, the replacement bridge will be built just north of the current bridge, and then the old Pinto Creek bridge will be demolished.

The project is currently in its early stages: the Arizona Department of Transportation (DOT) has been conducting geotechnical surveys of the surrounding ravine, ensuring that the land is suitable for new infrastructure. Any new construction in this area must first go through an exhaustive survey process in order to ensure its sustainability and effect on the surrounding ravine within the Tonto Forest. It’s vital that the bridge blends with its natural surroundings and has limited impact on existing plants and rock outcroppings. The ravine is approximately 80 metres deep, so traditional survey methods would require at least a day to complete the site from top to bottom. This includes using climbing equipment, abseiling down the ravine and walking the rocky terrain by foot, which comes with its own set of risks, hazards, and inefficiencies.

Surveying the Pinto Creek – a large, environmentally sensitive site with rough terrain – presented the perfect use case for drones, which are able to quickly capture aerial data and help land surveyors stay out of harm’s way. 3DR went to Pinto Creek and used Site Scan to capture the full context of the bridge and its underlying topology.

Jeremiah Johnson, solutions architect at 3DR, was the pilot for the day. He took off from the west end of the bridge, using the Site Scan app to plan the flight over the approximately 7.5 acre site. Johnson set up the crosshatch flight, and picked the appropriate altitude and gimbal angle for a scan of this size.

In half an hour, he surveyed the entire area with a single flight, taking 358 highres photos and collecting millions of precise datapoints.

“Mapping this ravine using traditional methods would take, at the very least, a day to survey from top to bottom,” Johnson said. “The bigger challenge, though, is in processing the data from this traditional survey: to get the same kind of accuracy as Site Scan, it would take approximately two weeks of processing time.”

3DR produced four key deliverables, including an orthomosaic, a digital elevation model, overlays, and a point cloud. (see ‘Key deliverables from a 3DR drone survey’ below for more details).

To show how drone data can be used in a BIM workflow, 3DR handed over the detailed point cloud to a team of bridge design and reality capture specialists at Autodesk.

Modifying the parametric components of the proposed new bridge in InfraWorks

Ramesh Sridharan, principal research engineer at Autodesk, imported the raw point cloud data into InfraWorks and processed it to extract and classify the features of the terrain. As the only structure in the area, it was easy to classify the bridge and remove it. In a matter of hours, the point cloud was filtered and a complete model was set up – aggregating point clouds, elevation data, and existing infrastructure – that provided a rich context in which to design the new bridge. 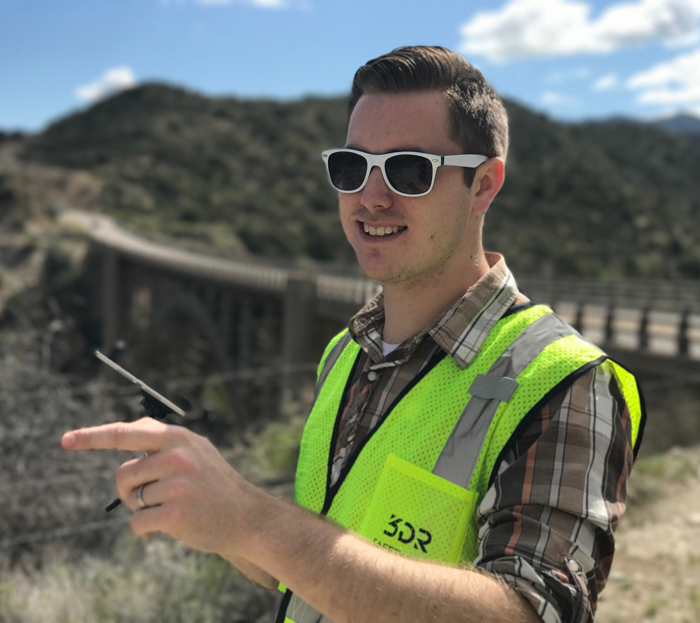 Once the point cloud was prepared for design, Ara Ashikian, Sr., product line manager at Autodesk, created a number bridge models with Infraworks in a matter of hours. He customised road alignments and grading, and could easily modify the parameters of each component that made up the bridge.

“Drone data can create rich point clouds, which are incredibly useful to guide parametric bridge modelling,” Ashikian said. “With the Pinto Creek point cloud, I designed a bridge within the real-world context of the surrounding ravine and its features.”

Sending to Revit for detailed design Ara sent the final bridge into Autodesk Revit in order to perform more detailed design. Because all of the underlying components of the structure were based on parametric geometry, they could easily be exported into Revit and other tools without needing to recreate them or perform any re-work. 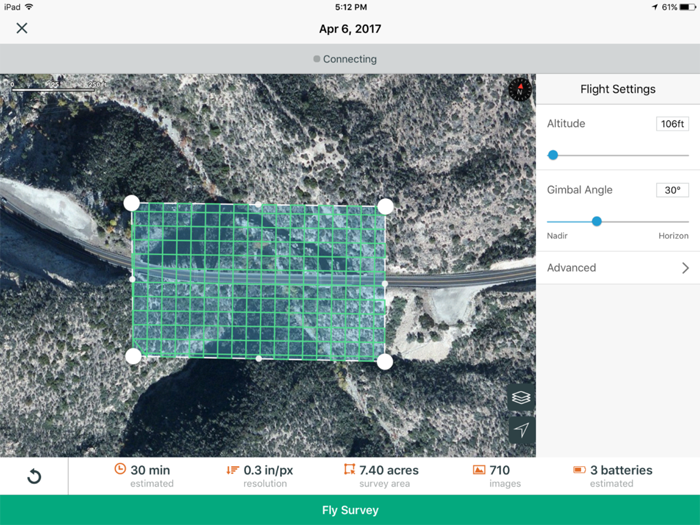 3DR recently sent the survey data to the Arizona DOT – the point cloud, the digital elevation model and the orthomosaic.

What exactly does a single 30-minute flight get you?

By the end of the day, 3DR had fully processed four main deliverables.

By processing 358 captured images, 3DR stitched together a detailed orthomosaic of the entire site, providing clear aerial data that can be manipulated in Autodesk tools like Civil 3D, Infraworks, and more. 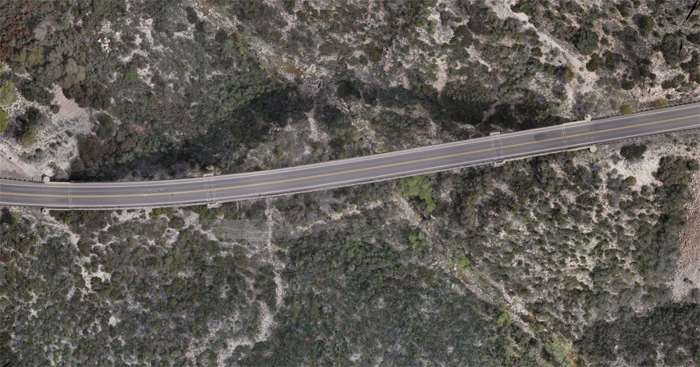 3DR captured data that could be used to create a digital elevation model, giving surveyors a clear, accurate view of different heights throughout the ravine. 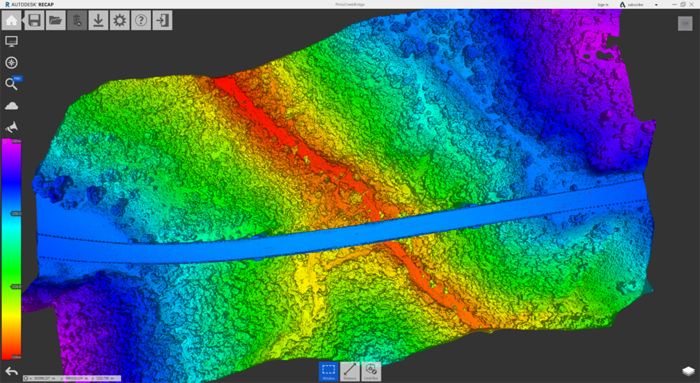 By bringing the topographical survey data into Site Scan and overlaying it on the orthomosaic, 3DR was able to easily compare reality to the original survey plans, and uncover new insights about the location. 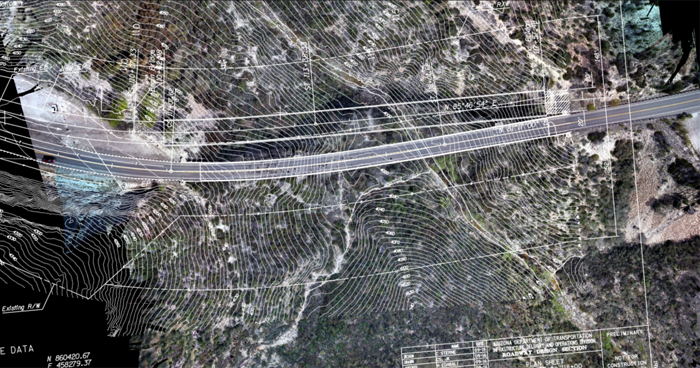 Using ReCap 360 Pro, 3DR then created a point cloud of the site, which can easily be edited, measured, and annotated throughout the design and engineering process. 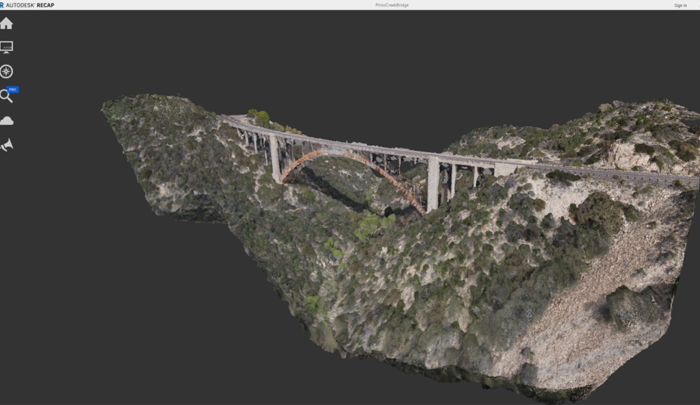