Michael Baker Corporation has made of the most its people power through its Bentley ProjectWise team collaboration system.

When Baker chairman Richard Shaw assessed how to maintain and grow profitability for the firm, his analysis landed squarely on one thing: maximising the utilisation rate of the companyÝs employees.

Baker realised that Increasing employee utilisation would certainly have a dynamic impact across the company.

One reason why some Baker employees were underutilised was the lack of standard processes. Another was the difficulties experienced when collaborating among BakerÝs 44 North American locations. Ultimately, Mr Shaw determined that BakerÝs ability to maximise employee utilisation significantly depended on the companyÝs ability to more effectively integrate its CADD production offices.

Increasing employee utilisation would certainly have a dynamic impact across the company. In past projects, some CADD and engineering staff were relocated to other offices so they could work more effectively with fellow project team members. This relocation, however, was expensive and adversely impacted staff morale, leading to increased staff turnover. Because access to project work was location-dependent, it was difficult to balance any workload across quiet and busy teams without forcing staff to travel.

With these challenges in mind, Baker formed the CADD Steering Committee and Digital Services CADD Support Team in July 2005. Its primary goal was to reduce overhead costs by minimising staff relocation and reducing travel expenses. To further limit spending, the team sought to implement as many standards as possible, as quickly as possible.

Coincidentally, and around the same time, Baker learned that some state Departments of Transportation (DOTs) in New York, Michigan, Indiana and Kentucky had started asking their consultants and contractors to get connected by ProjectWise ± an engineering project team collaboration system.

While Baker believed these organisations were among the first to ask consultants to collaborate in this way, Baker also felt sure that many more state DOTs would follow suit. Consequently, Baker felt that by implementing ProjectWise on its own projects, it could better manoeuvre itself to win additional contracts from these organisations.

Given the challenges faced and its strategy for innovation, Baker laid out its plan to connect all people and information across its 44 North American offices using ProjectWise. The ultimate goal: Create an environment to enable real-time collaboration among colleagues ± regardless of geographic location. 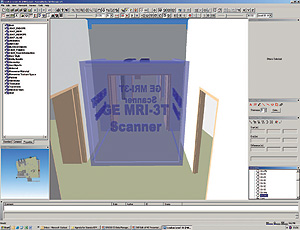 An early test of BakerÝs ProjectWise deployment was on the high-profile I-15 NOW project in Ogden, Utah. Baker was lead designer for the $183 million design/build highway reconstruction project awarded by the Utah Department of Transportation. Baker provided design services on the project, valued at $16 million.

The ProjectWise learning curve was short for the Baker team. Within just three weeks, everyone was trained and the project was proceeding to plan, with a fully utilised team sharing work in real-time.

By connecting project team members across offices using ProjectWise, Baker maximised its employee utilisation for the I-15 NOW project and its investment paid off.

Baker VP Bill Trimbath lauded the virtues of ProjectWise, highlighting particularly BakerÝs achievement in maximising employee utilisation. ýThe ability to transfer work between offices, probably resulted in saving many jobs because the work could be sent to the people who needed it rather than terminating their positions, or having to make them relocate,¯ Trimbath said.

BakerÝs success on the I-15 NOW Project merited the firm some high praise from one of its key clients, as rigid quality control and improved quality assurance procedures impressed the state DOT in Utah.

ýBaker accomplished all this and more, and the quality of their design is showing more and more each day as the project nears completion,¯ said Randy Jeffries, design review manager from Utah DOT, in naming Baker its Consultant of the Year. ýAll things considered, the Michael Baker Jr., Inc., team has succeeded in helping the minds here at the department stretch to places theyÝve never been before.¯