Located in North Carolina, USA, Fitzpatrick Engineering Group (FEG) specialises in structural engineering solutions for commercial, institutional, and healthcare buildings. The firm was selected by a major healthcare provider in the southeastern United States to be part of an integrated project delivery team for a US$18 million rehabilitation centre, providing structural design for the 65,000-square-foot, steel-framed building.

The rehabilitation centre in the southeast of the United States was the owner’s first foray into integrated project delivery, in which the design team, contractor, and major subcontractors were on board from the start of the project in late 2011. The owner requested a Revit model deliverable from all design disciplines for use in facility management.

The owner also required FEG to share the design model data with the fabricator.

Sharing structural model information with downstream members of the construction team, including fabricators, was not new to FEG. However, the owner’s requirement for a Revit deliverable did require FEG to closely examine the accuracy and completeness of data exports. A thorough internal review concluded that Bentley AECOsim Building Designer, one of FEG’s preferred BIM applications, was able to export accurate and complete structural data.

The solution to providing both the Revit model deliverable and high-quality steel fabrication data, without having to re-enter data, was to implement Bentley’s Integrated Structural Modeling (ISM) tools. FEG determined that its structural engineers could use AECOsim Building Designer in conjunction with Bentley’s Structural Synchronizer and ISM Revit plug-in.

“We could work in our preferred BIM application, confident that we would be able to send reliable information to the fabricator and deliver a Revit model through electronic means without having to manage two models separately,” Fitzpatrick said.

FEG started the project with two Bentley products: RAM Structural System, which allowed analysis and design using a single model, and Structural Modeler, a BIM application that enabled engineers to easily explore design alternatives with flexible interdisciplinary co-ordination and interoperability. When a new release of AECOsim Building Designer became available, FEG phased out its use of Structural Modeler in order to make use of the new modelling features in AECOsim Building Designer.

With the latest version of AECOsim Building Designer, FEG was able to use dimension-driven parametric modelling to create and manipulate complex structural assemblies.

Parametric modelling technology enabled the creation of parametric cells for common structural components in the project including the proprietary SidePlate connection and baseplates with anchor bolts. “Parametric cells have allowed us to add more meaningful content into our models and provide tighter co-ordination between our models and plans,” Fitzpatrick said.

Parametric cells provide designers with a visual check as they are placing the element. They also yield benefits with plan annotations and scheduling. Because they are linked to the original element, any associated data for an element can be placed as an annotation on the plans, and as the design continues to evolve, the annotations are automatically updated. Similarly, an entire group or subset of data for a component can be easily exported to a spreadsheet and reformatted into a schedule to meet corporate standards.

FEG created parametric cells for the SidePlate connections that included all of the plate components as well as the welds. As the connection component was placed, the engineer received immediate visual feedback. If the parameters entered were correct, the cell would fit snugly around the column and beams for that condition.

If column flanges extended beyond the side plates, or if the cover plates were not snug to the beam flanges, the user could take action to correct the problem rather than dealing with an RFI during construction.

Column base plate parametric cells were created that included anchor bolts, nuts, washers, embedment depths, and a non-plotting clearance lug at the bottom of the anchor bolt. If this (red) lug was visible from the underside of the foundations, FEG knew the footings were too shallow or the bolts too long for that condition, and the anchor bolts would not have the proper concrete cover. Anchor bolt layouts could be visually compared against the column profile for clearances during modelling as well.

The base plates and anchor bolt layouts were included on the extracted foundation plan, offering another opportunity to ensure consistency. The engineering team created spread footing parametric cells to allow them to consistently model footing sizes, reinforcing quantities and elevations. It also ensured enforcement of FEG’s corporate designs.

Beam web openings, necessary for proper co-ordination and interference detection, were created and scheduled. Annotations were placed on drawings for each of these parametric elements, closing the loop on accurate co-ordination between the model and plans and enforcing corporate standards for labeling each of the elements. The risk associated with transferring red marks the old way was eliminated, and consistency between FEG’s model and drawings was ensured.

“By creating parametric content with AECOsim Building Designer, we were able to provide an immediate visual confirmation of modelling accuracy during element placement,” Fitzpatrick said.

“The user was able to see the new content in full context of the model and could tell if the assigned parameters fit the current condition. This visual confirmation provided the first level of conformance and error checking.“ 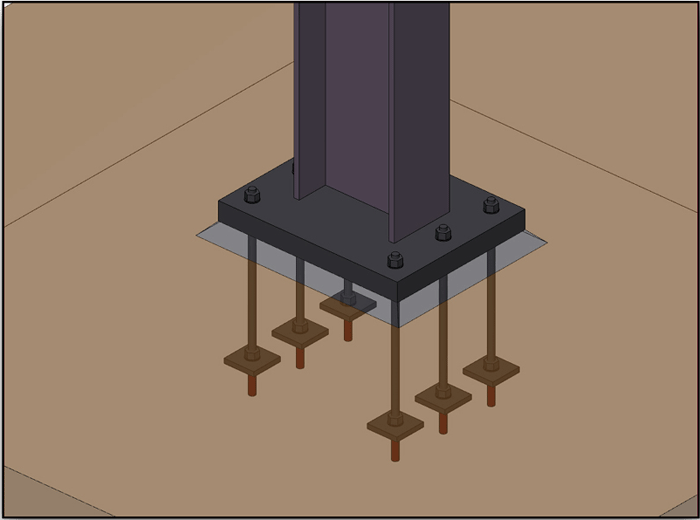 Bentley’s innovative products have allowed this small firm to surpass industry standards and set itself apart as a leader by developing an advanced solution to today’s BIM workflow.