Stephen Holmes highlights three architectural VR projects from around the UK, complete with tips on how to make VR work for you.

Approached by high-end London estate agent Knight Frank to develop an immersive experience of a Regent’s Park residence on the market for £13.75m, the creative technical team at Neutron VR started work with a handful of photographs and a floorplan of the grand neo-classical terraced house.

The goal was to give potential buyers a truly photo-realistic experience, right down to the views of the capital’s skyline from the property’s roof terrace.

They created the experience as a multi-platform solution, available on web, mobile, Oculus Rift, Samsung Gear VR and Google Cardboard. Despite the wide range of end-use hardware, the visuals were of sufficiently high quality to be used as high-resolution renders. 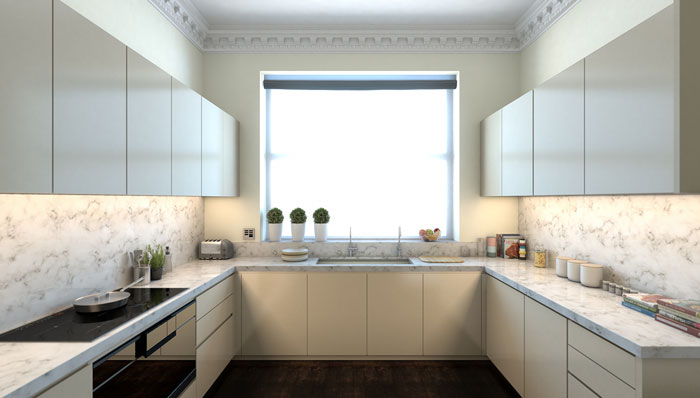 The assets were created in Autodesk 3ds Max, before being transformed for VR using Unity 5, an engine traditionally used for high-end 3D gaming. The project took a little over three weeks to complete, with Neutron’s crack team of three artists and a single programmer creating most of the work using VR-spec gaming PCs, running highend Nvidia GPUs.

“Using games technology to create realistic VR content is an ideal use of technology and process,” comments Neutron VR managing director Richard Coates. “Also, clients will generally ask for a small proof of concept before they commit to a full project,” he adds.

His advice to architects looking to use VR? “Reference is key to getting the property looking accurate. Having the CAD [data] for a property is a great starting point; however, the CAD [data] will need to be optimised for VR as its polycount is generally way too high.”

Be clear from the start about your budget and your intended platforms for distribution, he advises. Ask to see case studies and examples for previous work by VR studios. And think about how you can get maximum usage from the work you commission.

“Remember: almost everyone has a smartphone in their pocket and access to the Internet, both of which can also supply a great architectural visualisation experience, but clients can also use artwork from VR experiences to generate marketing images and maximise their budget.” 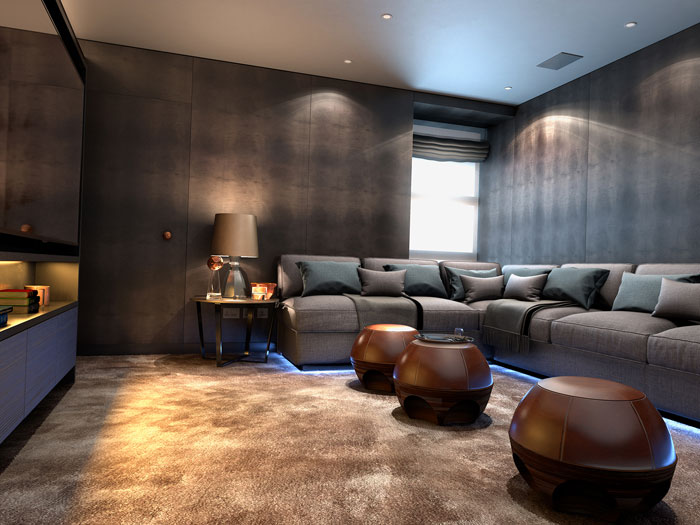 Whirlpool Kitchen of the Future by Hammerhead VR, Gateshead, UK

Whirlpool’s Interactive Kitchen of the Future was developed by the home appliance company as a way to showcase the latest smart products to attendees at the Consumer Electronics Show (CES) 2016 in Las Vegas. 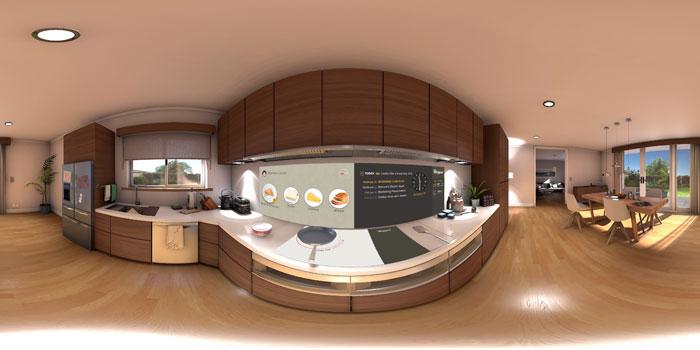 The VR simulation places users at the centre of a futuristic kitchen experience, in a fully fitted room and allows them to see how families like their will interact with smart technologies from Whirlpool in future.

For example, using a smart backsplash and smart countertop, the kitchen anticipates and adapts to the needs of users, personalising their favourite recipes, for example, or providing breakfast ideas based on how much time a parent has available before the school run.

At CES, the Interactive Kitchen of the Future gave VR users the opportunity to explore the kitchen and dining rooms on their own terms, picking up objects and interacting with products.

The three-month project for Hammerhead VR, a Gateshead, UK-based VR and immersive entertainment studio, involved 10 members of staff who built out the room and all its detailed features using 3ds Max.

Using custom-built PCs, the VR experience was then developed in Unreal Engine, pushing the technology to produce realistic, real-time architectural renderings for a variety of end-use headsets. 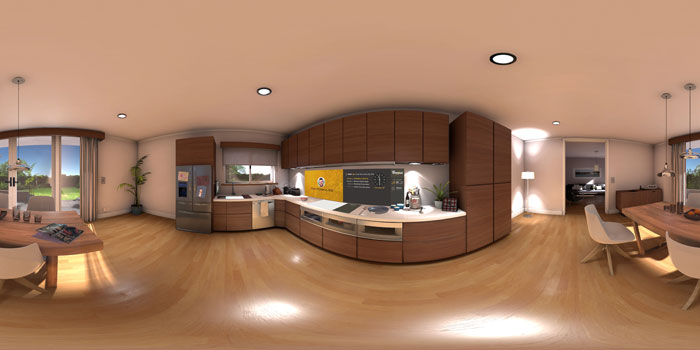 Says Yush Kalia, marketing and customer relations manager at Hammerhead VR: “The team particularly focused on the quality of material textures and the impact [that] lighting design would have on the user in the simulation, ensuring that it appeared at its best, not only on the Oculus Rift headsets used at CES, but also on the more accessible Google Cardboard and YouTube 360 formats.”

That’s particularly relevant advice for architects looking to use VR in their own projects. “Only use VR to show people how they could live if you’re committed to quality finishes. It is the single most important thing. Any compromise on visual quality will break the magic and ruin the overall effect,” says Kalia.

VR isn’t for everyone, he adds, “but when your client can’t physically be at a location to view the space, or has difficulty imagining what could be done, then VR comes into its own.”

Claiming to be China’s biggest VR supplier to architects, VRoom has recently opened a EMEA and Americas office in London, from where it intends to recruit new customers for its multi-user VR system.

In China, the company’s project for home building giant Greenland Group involved various designs, both for design verification of the whole estate from a walk-through perspective, but also to showcase interior materials options to prospective buyers later on in the sales process.

The VRoom team built and rendered assets for the building entrance and exterior, a whole estate of outside space, complete with water features and children’s’ play areas, as well as more refined interior designs. 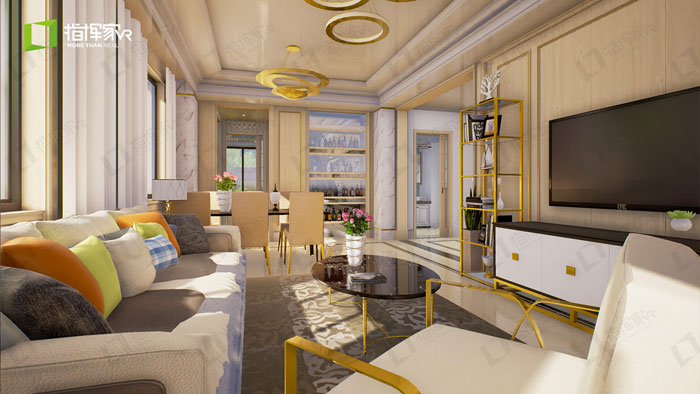 Using Unreal Engine, this was developed for VR and the VRoom multi-user solution, where body tracking allows up to four people to be in the same virtual environment together. One person acts as a guide, and using the HTC Vive’s ‘room scale’ technology, are able to move around the space and point to various parts of the room.

A team of almost 50 people was able to create a 300 square metre project (around three apartments) in just over two weeks.

“We believe that it is very important to visit a virtual space together with someone else who can guide you and show you how to interact with the space,” says VRoom’s tech evangelist, Thomas Gere. “By ‘interact’, we mean being able to move objects, change the texture of the walls, floors, furniture, switch on the lights.”

“The other very important aspect is mobility: to be able to truly walk in the VR space reduces the risk of nausea as there is true body movement coordination within the virtual space in parallel with the real one.”

His advice to architects looking to use VR? “Ask your VR solution provider to include some of the outdoor space in order to offer a more complete experience to clients, where they start outside and then take a lift to the property in question, for example.”

VR in real estate is now a “no-brainer”, he insists. “It is so immersive and real that it eliminates the need to build physical showrooms and costs ten times less for a development time of 15 days.”