With VR working its way into the construction industry, Tridify’s Nigel Alexander looks at some of the developments likely to be in store in the next 12 months

Virtual Reality (VR) has become something of a buzzword – or, strictly speaking, two words – among tech enthusiasts and companies looking at how they can ride the wave of this new technology.

While the entertainment industry, particularly gaming, is the most obvious target for VR, it is increasingly of interest to a broad cross-section of industries, including medicine (where it’s already being used as an alternative to human cadavers as a learning tool for medical students), retail (in e-commerce) and, most notably, architecture and construction.

VR is defined as the “computer- generated simulation of a three-dimensional image or environment that can be interacted with in a seemingly real or physical way.”

To date, there are many different types of VR technology, ranging from 360-degree images and ‘on the rails’ video fly-through, to fully interactive virtual worlds.

Each application has its own technology to go with it. For example, the devices everyone is currently talking about are headsets such as the Oculus Rift and HTC Vive, which are being pitched primarily at gamers as they provide the most immersive experience currently available. However, the technology behind VR will be changing over the coming year, moving from heavy computer and headset-based systems to flexible, interactive systems based on mobile devices such as iPads and smartphones.

Becoming ‘unwired’ is critical to VR’s success and not least in construction. Though it’s likely to emerge in the gaming industry first, an untethered, standalone device is going to be a priority for developers. A headset presents numerous restrictions: it is clunky and prohibits movement – and movement is crucial to the use of VR in construction and development. Being free to walk around a virtual building in real time or ‘real space’ is one of VR’s unique selling points, one that would most benefit from a wireless approach.

However, at this point in VR’s involvement in construction, it’s about proving that this technology is possible and how it can be applied.

We’re already seeing Augmented Reality (AR) headsets being pioneered for the construction industry, but its uses are a world away from those associated with VR. AR works by displaying information as you look at a space, whereas VR takes the data and models it right in front of the viewer, giving them something to which they can relate.

What we are likely to see are the beginnings of a communication between various technologies and devices that can work harmoniously and simultaneously. There are developments such as haptic technology, which when used with a touchscreen device, will give you physical feedback through vibrations in order to relay information. We are also likely to see the evolution of what is effectively a massive multi-player capability, where multiple people interact with each other in a VR environment. 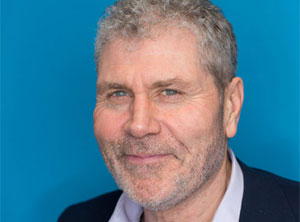 At present, we already have ‘agents’ that are deployed to simulate people moving around a building and depict how it might work in real life. The agents operate by becoming increasingly intelligent; for example, they start to optimise routes through a 3D visualisation of a building, just as users are likely to in real life. This will have a massive impact in terms of planning and reducing rework during construction.

Imagine, for instance, that you want to understand the difference between a large office development having one or two lift shafts: you would actually be able to see, at any given time, if a certain number of people are trying to access the building and what the result might be. It might reveal that putting in a second lift shaft means a door needs to be widened, for example, or that you perhaps need an additional entry point into the lift lobby. Essentially, what you are doing is modelling people between two points and reviewing the consequences in advance.

This technology will simultaneously empower the sales and marketing side of the construction industry, by enabling developers to showcase projects early on. It will also help save costs by reducing wastage and rework, by making it easier for all parties to collaborate on the design and layout of buildings.

As smart cities become increasingly popular with developers, we’ll be creating environments that can be easily linked to VR. Buildings are being fitted with vast numbers of electronic chips for smart monitoring. One of the results of this is that you start to collect data – an aspect of which is ‘movement’. At any given period of time, you might have X number of people moving through a particular area, but what might this actually mean and what are the possible outcomes? With collected data, you can assess where your congestion points will be and therefore calculate accurately how many doors you need to provide. You could consider managed access – doors that open and close at given times – that controls the flow of traffic to ease congestion, similar to a smart motorway.

This technology also helps with ‘exception planning’, where you use what are essentially avatars to work out the likely impact associated with a change in movement patterns. For example, how would you deal with an incident that results in an exit being blocked – where do you physically put 6,000 people who need to evacuate a building quickly? Lots of these issues can be simulated and planned for using VR. As it stands in construction, many people solve these issues with prior knowledge and a deep understanding of their industry. However, it becomes increasingly difficult and expensive to pass on this level of comprehension across a whole building or development.

Currently, planning and training for health and safety management is done in a two-dimensional analogue format. Essentially, it’s being carried out on pieces of paper and then bringing in the objects that you need – a laborious method, with no audit trail, unless you file every single piece of paper.

VR can be used to identify potential hazards in office environments

If, for example, you had a 2D plan of an office, you could look at it, and consider what might be hazardous about it – but imagine if you had instead a virtual, three-dimensional environment where it was easy to add or subtract objects and elements. You could visualise how a desk blocks an emergency exit, or show that an electrical box is not secured. From there, it would just be a question of going around and looking at the hazard, and identifying what measures were needed, perhaps a desk exclusion zone.

This approach might go further still, to include fencing, cones, modelling the swing of a crane on a site. You might even model an event across time. When you begin work on a building site, the safety requirements associated with a hole dug in the ground and the movement of traffic through the site are very different from the safety requirements you need to consider with a completed building.

Finally, there are important environmental considerations, too. If you can create a building in data before you construct it, it’s quite simply much cheaper to make any necessary modifications. Not only are you free to play around with a virtual environment, you can present it to the end user and gain relevant feedback to know exactly what is needed. No developer has the omniscience to predict every element of what a customer will need – a surgeon in a hospital for example, is going to have a far better knowledge of what they will need from an emergency environment than a developer ever will.

From helping to reduce wastage by allowing materials to be more accurately planned and preventing costly reworking, to allowing developers to create immersive property showcases, thereby reducing the need for travel to visit sites, the impact can be far-reaching. VR will become increasingly the construction industry’s ‘green weapon’ of choice.