The Costain Group has used ContextCapture from Bentley Systems to document site conditions for massive renovations at London Bridge Station as part of the £6.5 billion Thameslink project

As part of its mission to improve the safety, reliability and efficiency of railway travel within the city of London and throughout the UK, Network Rail has responsibility for the government-sponsored £6.5 billion Thameslink project. The project got underway in 2009, with completion expected in January 2018, when spacious new trains will travel through central London at peak times every two to three minutes.

At the heart of the Thameslink initiative is the redevelopment of London Bridge Station, the UK’s fourth busiest railway terminus, handling over 56 million passengers each year. Plans for the new London Bridge Station involve reconstructing its concourse to unify the station for the first time, allowing passengers access to all platforms in one place, as well establishing new retail stores and other station facilities. Upon completion, the new street-level concourse will be the largest in the country, exceeding the size of the pitch at Wembley Stadium.

To manage the London Bridge Station refurbishment, Network Rail awarded the Costain Group (Costain), one of the UK’s leading provider of engineering solutions, a £400 million contract, under which Costain is responsible for delivering detailed design and reconstruction plans.

“Our focus is to design and deliver a world-class London Bridge Station that enhances the capital’s infrastructure and improves the journeys of the hundreds of thousands of passengers who pass through the station every day,” comments Andrew Wyllie, chief executive of Costain.

The sheer effort of reconstructing London Bridge Station to include 15 new platforms presents numerous challenges, ranging from reconfiguring the station’s tracks and the installation of new signalling, to demolishing existing platforms and removing the roof – all while keeping the station open to passengers. To minimise disruption, it was decided that the project would be completed in nine phases and to implement its phased construction approach, Costain and the project team needed to obtain reliable data for the nearly 200-year-old site.

Originally constructed between 1836 and 1839, London Bridge Station houses a considerable amount of masonry arches that required surveying to determine the optimal approach for designing and constructing the new concourse. To obtain this information, Costain needed cost-efficient survey techniques that could generate an accurate 3D representation of the ageing structures, in order to understand the subsurface for reconstruction potential and enable stakeholders to make informed decisions on a tight deadline. 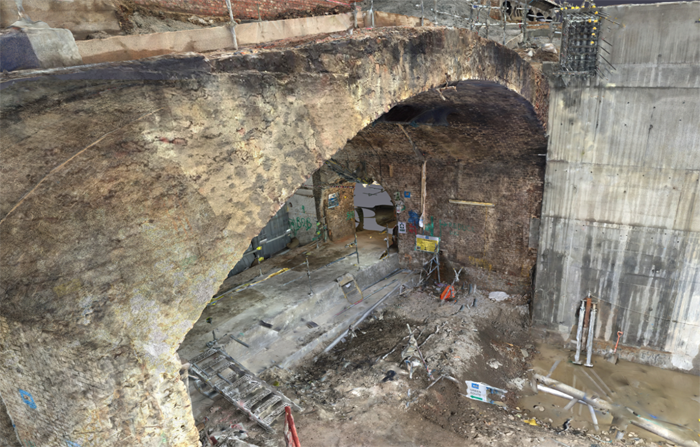 Photogrammetry versus scanning For years, laser scanners have been the preferred method of capturing digital data to survey and document site conditions with precision. Laser scanning provides the ability to capture a point cloud so dense that it is almost a 3D picture. Points in the scan are given 3D coordinates and this virtual geo-referenced representation can be shared among the design team.

Costain has invested in this technology to successfully deliver numerous projects. However, given the age of the structures at London Bridge Station and the limitations of laser scanning (a process that would take months to complete), Costain’s graduate surveyor Richard Bath experimented with photogrammetry to ensure each brick in existing structures would match perfectly with the new facade.

Using a simple camera to capture the old surface area delivered a denser survey than a scanner and also provided colour, enabling designers to quickly identify the bricks from the mortar joints. Additionally, photogrammetry was less disruptive to onsite workers, given the speed and size of a small digital camera, or even just a smartphone, to survey the site. The workers were able to move out of the area while Bath recorded a video or snapped a few photos, and within minutes, returned to their assigned tasks.

Another advantage of photogrammetry is that it accelerates workflows. While laser scanning requires highly skilled, welltrained technicians to obtain a virtual 3D representation, photogrammetry requires only a camera to snap a few photos. Using ContextCapture, they can then automatically generate the 3D reality model.

Costain follows a basic four-step workflow process. First, it marks ground control points (GCPs) of the area of interest and ensures they are clearly visible in the photos. Second, it takes pictures from varying angles and elevations surrounding the area. Third, it surveys the GCPs (at least three are needed to scale and georeference the model) and finally, it processes photos and GCPs together, using ContextCapture to produce the final model in a range of deliverables. 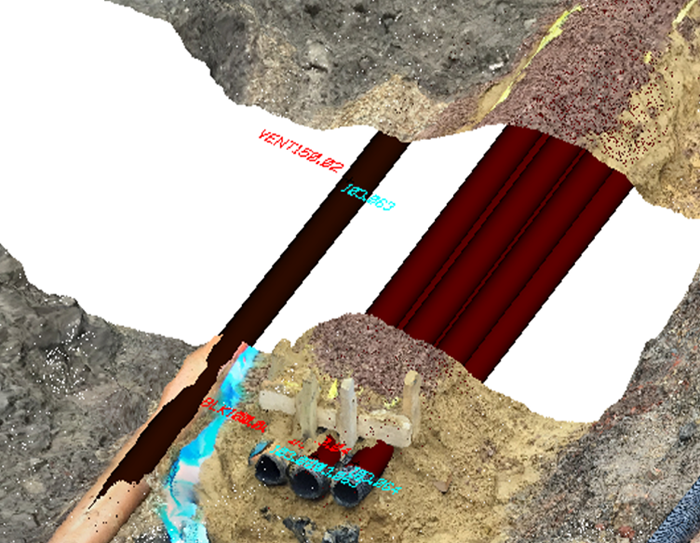 Photogrammetry saved time and costs while reducing the chance of misinterpretation

The first two steps can be implemented by anyone with five minutes’ training on determining the best method to mark GCPs and take the photos to ensure optimal deliverables. The final step uses Bentley’s reality-capture software and is completely automated, aside from the limited user time required for uploading the pictures and identifying the GCPs.

While overall processing time varies according to the number of photos and GCPs, the entire workflow, from taking photos, surveying the GCPs, and processing, can be completed in under an hour.

Comparing the accuracy of photogrammetry to that of laser scanning on the project, Bath observes there was a difference of a few millimetres for many uses on site, such as excavations. And, while the accuracy of the final 3D reality mesh predominantly relies on the comprehensiveness of the photos acquired, it is not imperative to invest in an expensive camera. The entire process from initial photography through to the 3D model is automated; and for the London Bridge Station reconstruction project, produced sufficiently accurate results that optimised costs and other project deliverables.

Photogrammetry saved time for data collection and eliminated the bottleneck associated with sharing a scanner among two dozen surveyors. Furthermore, a camera is much less expensive than a laser scanner. Photogrammetry and ContextCapture provided a safe, reliable non-contact survey technique that streamlined workflows and improved efficiency.

Says Bath, “ContextCapture is providing Bentley users like Costain a software environment that is progressing the use of reality 3D capture on a construction site. With just a smartphone, the entire workforce has the potential to document visually rich 3D construction progress with a minimal amount of training.”

Using Bentley software for the London Bridge Station reconstruction saved time and costs, while reducing the chance of misinterpretation on this important railway redevelopment initiative. Upon completion in 2018, this work will transform travel throughout London and the UK, expanding passenger capacity at London Bridge Station to 90 million people annually.