In November 2017 at Autodesk University, the CEOs of Autodesk and Esri announced the two companies would better integrate links between their products. In May 2018 at Esri’s annual UK conference, Martyn Day saw the first products of this strategic partnership 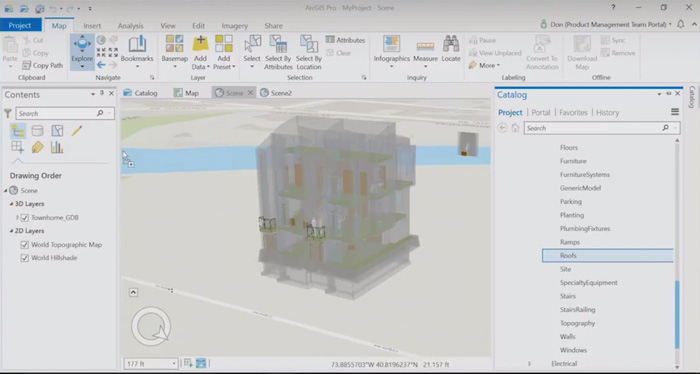 Autodesk produces some of the most popular design tools for BIM and civil engineering. Esri is the dominant force in Geographic Information Systems (GIS). Historically the areas have been poorly integrated and remained in very defined data silos. The reality is that all projects have a location and a co-ordinate and context is becoming increasingly important. Something had to be done to ease integration.

Revit was designed to define the geometry of 3D intelligent models and produce co-ordinated documents. It really was not designed for site development. In the Autodesk world topology was left to AutoCAD Map 3D (which is now a toolset included with Autodesk subscription) handled in authoring products like AutoCAD Civil 3D, or conceptualised in Autodesk’s relatively new Infraworks, which came from an acquisition. This means lots of layers of related data in different, uncoordinated systems. It’s here that GIS can really help to make sense of this important data.

GIS tools are designed to handle huge 2D, 3D and layered spatial data sets. They represent a single source to gather, manage and analyse project data and assets. Esri is a privately held Californian company that has dominated this space since 1969, with products such as ArcGIS. It has an estimated 43% of the GIS market; the second largest supplier has just 11%.

As we enter the era of ‘Big Data’ and projects grow in complexity and scale, Autodesk and Esri came to the conclusion that neither was likely to achieve this transformation alone, and could only accelerate community success by working with others. This meant better integration was needed with other leading applications.

The joint effort between the two companies aims to enable ‘frictionless, live data integration [to] help create a deeper understanding of infrastructure in the larger context of built and natural environments.’

While this may seem like a mutual agreement to access each other’s APIs (Application Programming Interface) to enhance connectivity, we have been led to believe that Autodesk and Esri are spending a lot of time looking at data flow within the process and key areas to transform the project life cycle, enabling the modelling of sites in context. The companies are calling this ‘Geodesign’, designing in the natural environment from the start, with regular scans updating the site as the project progresses, capturing every stage of development. 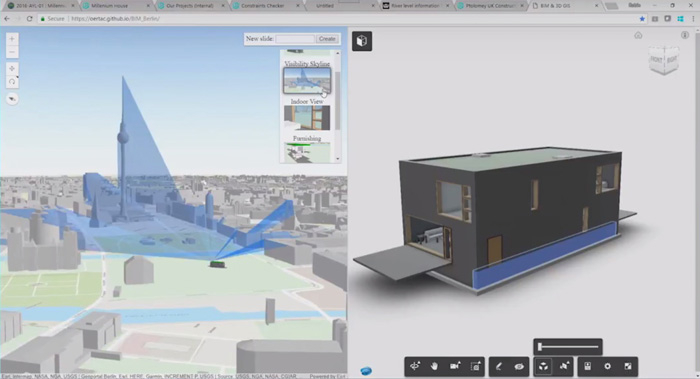 Autodesk BIM 360 model (right) as seen in Esri ArcGIS web scene (left). The model is displayed in its correct geographic context with viewshed analysis being carried out

With a lot of excitement around IoT, the companies are interested to explore remote sensors to monitor every tremor and temperature change. In the future it’s envisaged that there will be billions of sensors embedded within infrastructure, enabling models to become ‘Digital Twin’ assets which can be interrogated for real time information.

Esri and Autodesk will continue to develop and release themed updates to deliver on this integration and lifecycle story. 2018 sees the first and second phases of development arrive for customers.

The first development in this partnership, which is already available, connects InfraWorks and ArcGIS Online. Designers and engineers can now bring GIS content from Esri ArcGIS Online into InfraWorks. It’s now also possible to directly import roads, pipelines, and electrical transformers into ArcGIS.

Phase two, which is currently in development, is the integration between Esri ArcGIS Pro, Autodesk Revit and Autodesk BIM 360. ArcGIS Pro will be able to read native Revit files. This means that GIS folks will be able to add Revit data to ArcGIS Pro projects and save as / turn it into GIS content. Similarly, Revit will be able to bring in ArcGIS Pro datasets for reference and context.

Unexpectedly, at Esri’s London User meeting, Robin Appleby, a consultant at Esri gave a demonstration of the unreleased development work with Autodesk that has been done to date. In the next release, ArcGIS pro will feature the ability to read Revit files directly, understand the data structure and bring the geometry and data, natively into ArcGIS Pro.

Appleby also gave a live demonstration of an integration of an ArcGIS web scene and Autodesk BIM 360, bringing through a model of a building into a city model and then carrying out shadow analysis. Esri is integrating not just at the desktop level but also with Autodesk’s cloud-backbone.

While the demonstration was very quick, it gave a flavour as to the level of work and integration that users can expect to see in 2018. Autodesk’s next opportunity to show integrations from its side will probably come in the Autumn / Winter with subscription updates and Autodesk University in Las Vegas.

The Esri User Group video on BIM can be seen here. The Autodesk related demonstration starts at 18:30mins.

When Esri CEO Jack Dangermond joined Autodesk CEO Andrew Anagnost on stage at AU Vegas, it was hard to scope the true depth of the partnership. How much more than just an API deal was really on the table? And was this Autodesk forming an alliance to attack firms like Bentley that have been more successful in the GIS and transport markets?

From what we have seen demonstrated and the stated intentions specifically from Esri’s side of the fence, this is absolutely a big deal. Relying on IFC import was not going to cut a big slice of the BIM market for Esri in the future; it needed native support. For Autodesk, Esri will help it with its bigger clients, help win city-scale projects, empowering Revit workflows and get a serious analysis and simulation developer to boot. However, bigger things are being planned between the companies and as cities get smarter and infrastructure renewed, expect BIM models of completed buildings, bridges, roads and transport systems to be hosted in Esri cloud products, delivering live data and analysis.