Henning Larsen Architects in Denmark is pioneering the use of 3D printing to create detailed models at all stages of the design process.

Architects are trained to conceive of their designs in 3D. To impress a potential client or a panel of judges, it helps to have a finely detailed model to communicate concepts clearly. It also helps to be able to create detailed models throughout the entire design phase of a new project, so that engineering problems can be rectified early on, reducing the number of errors that go undetected beyond the early stages.

Design visualisation: Henning Larsen acquires many of its commissions by winning design competitions, including that to build the prestigious Reykjavik Concert and Conference Centre, Iceland, which is under construction and due for completion in 2009.

Henning Larsen Architects (HLA) is a world-renowned architectural firm based in Copenhagen, Denmark. Together with fellow Dane J»rn Utzon (designer of the Sydney Opera House), HLA founder Henning Larsen has helped to establish Denmark as a leader in contemporary architecture. He is the creative genius behind landmarks around the world, such as the Danish Embassy in Riyadh, the Copenhagen Opera House and the Roland Levinsky Building at the University of Plymouth, UK.

To help to push the boundaries of architectural design, HLA continually improves its model making process by investing in the latest 3D model making technology.

Using its new Z Corporation ZPrinter 450 3D printer means that HLA can make precision models in less than a day, which would have once taken weeks to complete. ýThe machine has created a much closer link between the physical and the digital world, allowing us to print component parts in colour and construct models of buildings in 3D from the very beginning of the process,¯ said Morten Steffensen, an engineer at HLA.

The ZPrinter 450 enables Henning LarsenÝs architects to print shapes that are challenging to make by hand, such as double curving surfaces and intricate or finely detailed elements such as staircases, for example.

The firm took delivery of its ZPrinter 450 in January 2008. ýWeÝre told that the machine has the fastest output speed of any 3D printer; five times greater than similar systems in the same price category. We can even build multiple models at the same time by stacking and nesting parts,¯ said Steffensen.

Models can take between an hour and 12 hours to print depending on how much detail is included in the original CAD file. The ZPrinter 450 automates many processes, meaning that operator touch time for setup and model removal is reduced. Time-saving machine functions include automated setup and self-monitoring as well as automated powder loading and recycling. The ZPrinter 450 has been created for the front-office environment and has been designed to operate quietly, to use safe build materials and produce zero liquid waste. HLA acquires many of its commissions by winning design competitions, including that to build the prestigious Reykjavik Concert and Conference Centre, Iceland, which is under construction and due for completion in 2009. 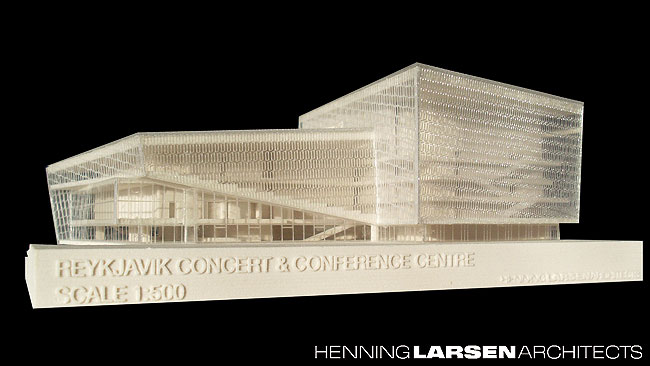 ýWe use 3D printed parts together with laser cut parts and handmade elements to build models for competition entries,¯ said Mr Steffensen. ýLike the Reykjavik Conference Centre, they are typically quite complex and help to clearly communicate our ideas at the earliest stages of the competition process.¯

The interior of the Reykjavik model was printed on the Z Corp ZPrinter 450 and the skin of the building was laser cut.

ýWe were able to print two batches of interiors at a time on the ZPrinter 450,¯ said Steffensen. ýThe entire model takes between 12 and 14 hours to print, plus assembly time.¯ Build-time is only one consideration when creating a model. Another is precision, which is where the ZPrinter 450 has really benefited Henning Larsen.

ýWhether itÝs a competition or a project bid, thereÝs limited opportunity to get ideas across, so we need all the help we can get. Thanks to 3D printing our models are more refined and more precise, which gives us an advantage. ThereÝs no doubt that beautiful models help us to win commissions,¯ said Steffenson.

According to Steffensen, building legislation in the EU will soon demand that architects produce multiple 3D models from early on in the design process. ýThere are a number of legislative initiatives underway in the EU and its member states that seek to increase the use of digitalisation in the building process,¯ he said. For instance, in HLAÝs home country of Denmark, all buildings with a projected construction cost of more than ?4 million must have their design produced as a physical 3D model before a contract can be awarded.

The aim of the legislation is to reduce the number of potential snags during the construction of a new structure building.

It also means that any company wishing to bid on a project will have to invest in ¾ or have regular access to ¾ a 3D model printer.