Norwegian researchers have used Comsol’s Multiphysics software to track how low-frequency sound waves travel within buildings, so that they can recommend design adjustments to alleviate annoying vibrations

1 Simulated sound pressure in a laboratory with two chambers divided by a wall. A loudspeaker is placed in the room on the left-hand side. The simulations show that the acoustic resonances within each room affect the sound insulation

Anyone who has slept near an airport knows the feeling: an early morning flight wakes you from sleep, not just because the engine is noisy, but also because everything around you seems to be shaking.

Likewise, those living near wind turbines, military sites or hospitals with helicopter landing pads often complain that windows rattle and everyday objects buzz when there is external noise. More puzzling for them is the fact that, even when they can discern no sound with their own ears, they may still notice irritating vibrations.

That’s down to infrasound: sound at a frequency of 20 vibrations per second (20 Hz) or less, not typically audible to the human ear, but with other, easy-todetect effects. As waves hit windows, spread to the floor and impact internal walls, they induce a noticeable indoor vibration. In fact, low-frequency sound waves are notorious for their potential to disturb and annoy.

Noise is part of modern life and there are formal standards that use sound pressure level measurements to recognise high-frequency sound waves at levels of sensitivity, intrusion and danger for humans.

According to Finn Løvholt of the Norwegian Geotechnical Institute (NGI), the creation of building vibration due to infrasound is an area of research that has not been explored extensively. For this reason, NGI, an international centre for research and consulting within the geosciences, has been running investigative programmes for several years on behalf of the Norwegian Defence Estate Agency.

Low-frequency sound encounters less absorption as it travels through the air than higher-frequency sound, so it persists over longer distances. The amount of sound transmitted from the outside to the inside of buildings is greater.

Løvholt is interested in what happens at the threshold of hearing. He wants to understand how sounds from external sources interact with buildings and generate vibration that is perceived by people. Countermeasures might then be recommended to prevent vibration and standard units might be proposed that recognise the need to account for the ‘annoyance’ factor.

Simulating the spread of sound waves

Løvholt and his colleagues decided to create a computer model that would allow them to pick apart the mechanism of lowfrequency sound waves hitting and penetrating a building. They used the Comsol’s Multiphysics software to simulate a wooden structure with two rooms separated by a wall (see figure1 above, and figure 2 below), closely mimicking the laboratory experiment set-up.

Within the model, they assigned a loudspeaker to one room, a microphone to the other, and placed various probes around the structure in order to monitor sound pressure levels and vibrations. Every component was carefully modelled, including the steel frame, the air cavity and studs in the wall, the windows, the plywood sheet and the plasterboard. 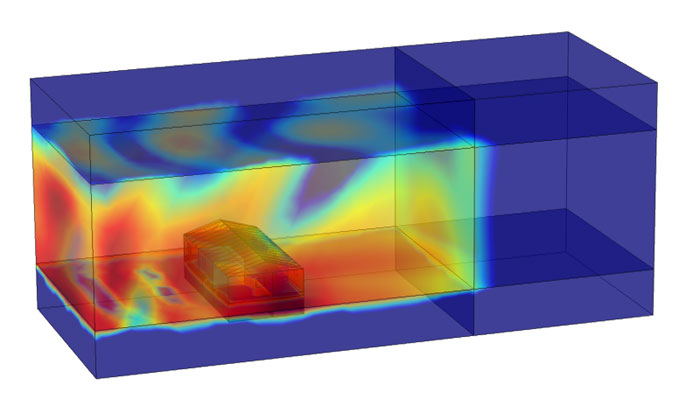 2 Simulated low-frequency sound originating from outside, around and inside a building. In both cases, the colours indicate the variation in the sound pressure within the rooms and the wall cavities

Each element in the model had a resonance that depended on the wavelength of the sound wave and the pressure distribution. For example, there was high pressure in the speaker room and lower pressure in the microphone room, and the resonance of the wall depended on its length, thickness and stiffness.

The team also had to recognise compound resonances – that is, those created when two components are joined, such as two pieces of timber, screwed together. The simulation software allowed them to enter all the parameters to be monitored.

In particular, it enabled them to couple different physics, so they could look at the acoustics of open-air sound interacting with indoor structural dynamics. The coupling works both ways, so feedback can be identified. This coupling was crucial for the analysis, because sound waves can generate a huge range and variety of resonances. The resulting model allows these to be seen.

The NGI team then verified their simulation with laboratory testing of low-frequency sounds as they were transmitted through a wooden construction with two rooms. Løvholt explains that the motion of the wall and the sound pressure level are the main quantities measured and results show very close correlation to the model (see figure 3 below).

The model shows that the transmission of sound within a building is governed by the way in which low-frequency waves interact with the fundamental modes of the building components, the dimensions of the room and the way in which air leaks from the building envelope. Vibrations in ceilings and walls seem to be the dominant source of low-frequency indoor sound, with floor vibration driven by sound pressure inside the room. 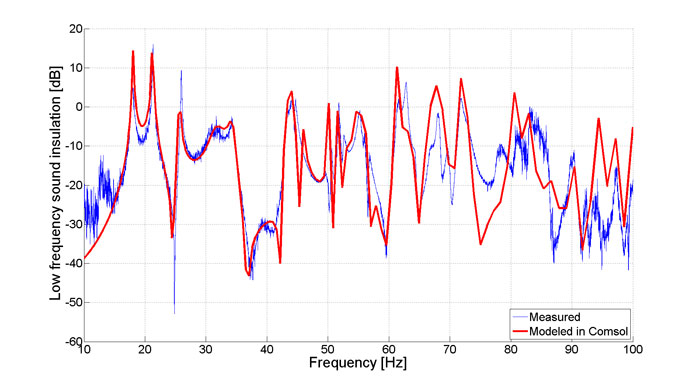 3 The model accurately captures the location of the resonances as well as the level within a few decibels. As the frequency increases, more modes in smaller and smaller structures will get excited. This shows as the increasing difference between the measurements and the model results

“We now have a tool to predict sound and vibration at low frequencies,” Løvholt says. “We can use it to design and test mitigation measures such as the lamination of windows and the stiffening of walls – if a wall or window moves less, sound transfers less.”

“In addition, the model shows us the influence small details have on the system; for example, how the screw connection between studs and plasterboards can reduce the effect of a countermeasure, as they actually reduce the overall stiffness of the structure,” he adds.

The next stage for the team will be fullscale field tests on a real house in an area of Norway exposed to aircraft noise. Meanwhile, the team will continue to use and develop the model they created using Comsol Multiphysics.

“We have never achieved this level of agreement with real-life testing before and it is all down to how we were able to model the different structural elements in the multiphysics software,” says Løvholt.

“The model enables us to make decisions and assign countermeasures. This is much cheaper and quicker than physical testing. The model may then be expanded to simulate the sound propagation and vibration in an entire building.”