First shown to us in movie presentations at the 2007 BE conferences and now approaching its commercial release, MicroStation ÙAthensÝ is a huge step forward. It builds on the foundations of the V8 file format update and the subsequent V8 XM display engine rewrite to enhance and pull together a set of new and existing features into an increasingly powerful toolset for design teams of any size.

A Bentley executive remarked shortly after the launch of MicroStation V8 that ýMicroStation is now an excellent DWG editor¯, an apparently flippant remark that raised a laugh from the conference audience, which did, however, have deeper significance.

As BentleyÝs product range has become increasingly open to reading other formats, it will be interesting to see whether MicroStation will continue to widen its editing capabilities to further formats. The recent agreement with Autodesk raises my hopes that we are moving, albeit slowly, towards an environment where MicroStation and other applications will compete to be the best tools for managing and editing our data rather than seeking to contain us.

In response to the ever increasing breadth of MicroStationÝs toolset, changes have been in progress over several versions to rationalise the interface to ease use. These have carried on in ÙAthensÝ particularly in the consolidation of the previously separate main tools and tasks toolboxes into a single tasks panel and the complete reorganisation of the Tools menu. However, one of MicroStationÝs strengths has always been compatibility with existing data and working methods; for the change averse the Main Classic toolbox still exists. The file format is of course unchanged.

Bentley is unashamedly targeting the worldÝs largest construction projects. While this can lead to an impression that the software is over-complex for smaller projects, users can be sure that design and production work will not be held back by the software. Developing a wide range of applications for the largest projects makes features available to smaller projects that would otherwise not be feasible. Increasing numbers of features, some GIS tools for instance, are being drawn into the core of MicroStation.

ÙAthensÝ builds on XM to offer tools that can bring whole sections of workflow currently carried out in applications such as SketchUp and Photoshop back into MicroStation. While SketchUp is a brilliant application, it does have limitations and is not a solid modeller. Build anything complex in SketchUp and you will need to rebuild it in MicroStation solids before using it as the base for extracting useful production information.

Following on from this, BentleyÝs most recent major announcement is the licensing of the Luxology rendering engine. Luxology will gradually supersede some, if not all, of MicroStationÝs existing rendering methods to bring new levels of speed and additional rendering features that MicroStationÝs visualisation community have been crying out for. As always, existing MicroStation data will be compatible with this update.

Dynamic views were impressively demonstrated in a slide show at BE 2008. The real-time section cutting and ease of placement is stunning, particularly in comparison with BentleyÝs previous section cutting tools. Bear in mind that this is being done to large scale fully solid modelled architectural projects. The attractions of easily generating plans and sections on the fly using these tools are obvious, the difference here is that these visually arresting tools are also generating valuable production information, not only presentation material. 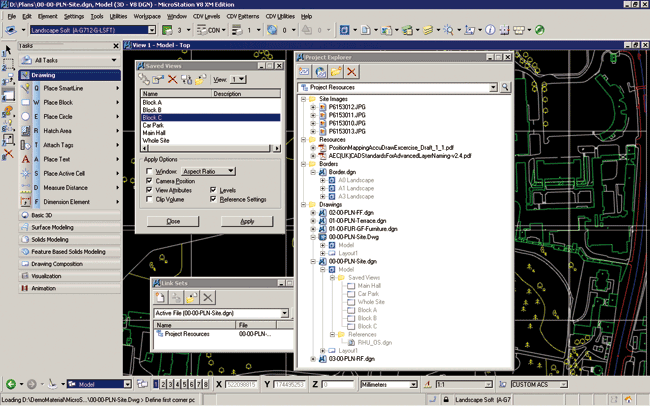 XMÝs Project Explorer currently speeds access to files of any type adding display of MicroStationÝs reference files, saved views and models. All features that will be more central to parts of the ÙAthensÝ workflow.

The transition to ÙAthensÝ will be both easy and challenging. The easy part is taking existing methods and workflow forward, simply taking advantage of the interface and tool enhancements and additions. Users will not need extensive training to simply do what they already do in ÙAthensÝ. If you have already moved, or are about to move to XM, changes that you make, establishing dgnlib library files for levels and text styles for example, will carry through to ÙAthensÝ unchanged.

The challenging part will be the transition to a 3D workflow. However this challenge is not posed by the software, it is primarily about process and mindset. The tools provided by ÙAthensÝ will help to ease this transition. Having moved existing processes to ÙAthensÝ, users can learn new workflows in a familiar environment using existing data, building up their skills in parallel with their organisationÝs development of process.

The most exciting trend for MicroStation and other AEC applications is the incorporation of building physics into the foundation toolsets. BentleyÝs continuing acquisition of structural and environmental analysis applications will lead to the availability of an increasingly wide range of analytical tools earlier in the MicroStation design process helping designers make fundamental decisions on a more informed basis. By providing benefits that are only available in a 3D environment, AEC firms are given even more encouragement to make the jump from existing 2D workflows.

To prepare for ÙAthensÝ if you are currently an XM user, take a close look at several existing features to understand how they work and review existing workflows. V8 introduced sheet models initially for DWG compatibility. While these already have significant advantages over conventional MicroStation 2D plotting workflows they will be fundamental to ÙAthensÝ 3D workflows offering a double return on time invested. Annotation Scale, introduced with V8, and Project Explorer introduced with XM, as well as the long established Saved Views are other essential companions to this in the ÙAthensÝ drawing composition workflow.

The hardware requirements for ÙAthensÝ are loosely stated by Bentley as 2GB RAM plus a DirectX 9c compliant graphics card. Current experience suggests that a recent card with 256MB of graphics RAM should be regarded as a minimum, 512MB is advisable. From XM onwards MicroStationÝs graphics have been entirely driven by DirectX so you may find that gaming cards are better suited to ÙAthensÝ than some OpenGL optimised certified workstation cards. This is an area that requires further exploration.

While MicroStation currently remains single threaded, one of the advantages of the Luxology rendering engine mentioned above is that multi-threading will now be used by Luxology rendering processes, good news for owners of dual or multi core processors.

Bentley Select subscribers can download the latest ÙAthensÝ beta and find out more about on the BE Communities website.