In between the main stage presentations, classes and labs, the exhibition hall is always a highlight of Autodesk University. Greg Corke reports on some of the standout technologies on show in Las Vegas in December 2010.

The Exhibition Hall at Autodesk University (AU) is always a great opportunity to see new technologies, products and services. This year there was a major emphasis on the AEC sector, with lots of new faces presenting complementary Building Information Modelling (BIM) tools for Revit and other Autodesk applications.

As always, not all of the technology at AU is available in the UK yet. However, increasingly these tools are being made available for download in online stores, or as services in the cloud, and the need for a dedicated reseller channel is becoming less critical.

3D point cloud model in Pointools of a Ford motor car plant in the US. The point cloud is comprised of approximately 4.5 billion points and was captured by a Faro Photon 120 scanner.

One of the major themes this year was rendering in the cloud. There were two companies promoting new services that enable architects to send their Revit scenes up to the cloud so they can be rendered in a fraction of the time that it would take to do on a standard workstation.

This seems like a perfect fit for smaller architectural firms, which may not have the resources to invest in powerful hardware in-house, or simply may not render scenes that often to justify such expenditure. Of course, having access to such powerful compute resources in the cloud can help anyone on a tight deadline.

Limitless Rendering (limitlesscomputing.com) is an online rendering service for Revit Architecture 2009-2011, which uses the mental ray rendering engine. The workflow is pretty simple: export a .FBX scene from Revit, upload it to the site for a preview and pricing, then simply click render.

On the website there is a comprehensive step-by-step guide, and some example 1,024 pixel wide renders. Prices for these jobs range from $13 to $225 depending on the number of lights in the scene. We would expect prices to rise significantly as resolution increases.

The company claims it can render a scene in seconds/minutes instead of the hours/days it usually takes to render inside of Revit. With such fast rendering times the process is interactive and users can navigate through a scene in real-time and watch it re-render as soon as the mouse stops.

An ‘unlimited’ number of users can view the scene through any Flash-enabled web browser. This could also make it a very interesting solution for collaboration as well as a means to get renders back fast. The technology is still in the final stages of development and RevUp Render is looking for beta testers. 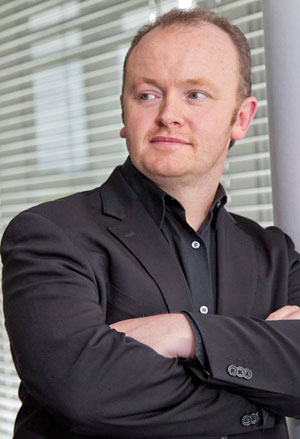 On the subject of clouds, point cloud data also featured very strongly at Autodesk University. Point cloud data is produced by 3D laser scanners and is a very quick and efficient way of surveying a site or building. The data can be used directly inside a CAD or BIM program, and while the technology has been around for many years it is increasingly being used in the AEC sector, specifically for architectural refurb projects or when placing new BIM models in context.

As always, there were a number of laser scanner hardware manufacturers at the event, but it was on the software side that there was the greatest interest.

London-based Pointools (pointools.com) is one of the industry’s most established players and its ‘Vortex’ technology is widely regarded to be the industry’s fastest point cloud engine. Its ability to handle billions of points, very efficiently, means that it still remains a popular choice for AutoCAD users despite AutoCAD being able to work with point cloud data natively since the 2011 release.

At AU, Pointools demonstrated the ease with which its technology can work with huge datasets, with a demo that enabled a real time walkthrough building that had been laser scanned.

The big news for Pointools actually came soon after AU with the launch of a new software bundle. The new Pointools Suite gives users a portfolio of applications and plugs-ins, which are designed to streamline the conversion, processing, and reuse of point cloud models.

“By packaging these applications and plug-ins in a cost effective bundle, we are making it easier for project teams to work with 3D laser scan data inside their preferred CAD application environments,” explained Joe Croser, VP of products at Pointools. “For a very competitive price, users can now convert raw point data into detailed 3D point cloud models. They can process and edit point clouds to generate high-definition movies, and they can reuse the same point cloud models inside a broad range of Autodesk, Rhino, and Google SketchUp apps.”

For architects, bringing point cloud data into a BIM environment as intelligent BIM objects is the holy grail of laser scanning. While fully automating this process is still some way off, there was a new tool on show from the recently merged Avatech Solutions and IMAGINiT Technologies that provides a stepping stone from dumb point cloud data to intelligent BIM models

The company showed its new Scan to BIM software (avatech.com/scantobim), which it says takes the ordeal out of the process of getting 3D laser scanning data into Revit. The software enables users to import point clouds directly into Revit, view them based on colour, intensity or elevation, and then assist with the creation of Revit elements including walls, windows and other construction geometry.

This year the company had two new enterprise solutions on show — Bluebeam Q and bFX.

bFX extends the reach of Bluebeam’s PDF markup tools by combining its Bluebeam PDF Revu software with an online project management system. All PDFs are stored online so project members can see the most recent revisions.

Transoft Solutions (transoftsolutions.com), another AU regular, also had a new product on show to add to its growing portfolio of road and site-related design software.

Nexus is a new CAD tool for planning and developing roadway junction designs for new construction and rehabilitation projects. Transportation engineers and planners are able to create geometry with surface grading and drainage patterns in their junction layouts.

The software uses the Vehicle Envelope Method of design in its vehicle swept path and turn simulation software AutoTurn to handle the interdependent design components of a junction.

Nexus comes with complete sets of standard design vehicles for different countries and custom vehicles can be imported from AutoTurn. Transoft also unveiled the second release of its roundabout planning and design tool, Torus. 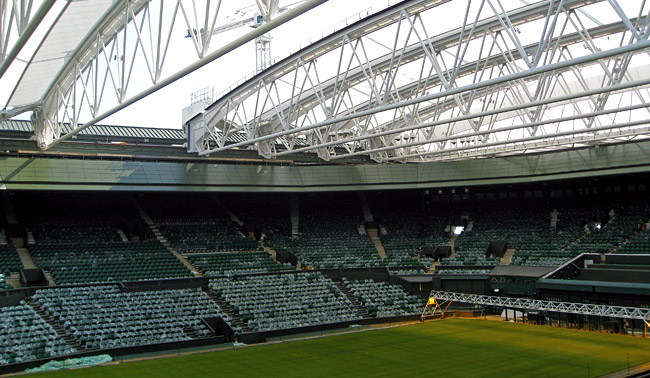 Elsewhere in the world of road design software, Savoy (savoy.co.uk) returned to AU with a new corporate identity and a brand new roundabout design tool called AutoTrack Junctions. The software enables users to not only design the roundabout geometry but also analyse flow and capacity in real time.

There were also a number of tools on show to help with quality control on BIM models. Finnish company, Solibri (solibri.com), was showing the latest version of its Model Checker software, which analyses BIM models for integrity, quality and physical safety. The software can be used for spatial co-ordination, quantity takeoff, or energy analysis.

Like NavisWorks from Autodesk, the software is able to highlight clashing components, but Model Checker can also check that the model complies with building codes and internal best practices. Examples, include checking that there are no unallocated spaces that can be important for energy analysis, or that all load bearing structures, such as columns are properly connected to other load bearing structures.

The latest 6.1 release includes what Solibri describes as ITO (Information Takeoff) functionality, which enables ‘data mining’ from the BIM model. ITO can be used for many purposes, ranging from quantity takeoffs to automated area calculations and extracting the information used in carbon footprint calculations.

Model Checker uses the widespread IFC (Industry Foundation Classes) format from BuildingSmart to bring in BIM data from a variety of sources. It also has a direct link to Graphisoft ArchiCAD.

ideateBIMLink (ideatebimlink.com) is an interesting little product that enables data to be pushed and pulled between Revit (Structure, Architecture and MEP) and Microsoft Excel. Users can extract all manner of data from Revit, work on it in Excel (or externally with cost estimating, takeoff, or analysis tools), and then push it back into Revit. Once a link has been made its definition can be saved for re-use in subsequent projects.

SkyBIM Estimator (digitalbuildingsolutions.com) is a cloud-based real time estimating solution for Revit. By hosting all the latest project data online, all members of the team, from architect to owner, can collaborate on an estimate, view the latest takeoff quantities, edit product costs and create reports.

Cad Technology Centre (cadtechnologycenter.com) was showcasing its range of Revit Express Tools. These include the Revit Family Processor, which makes it possible to automatically update Revit families and Revit Data Transfer Tools, which enables users to exchange data between Microsoft Excel worksheets and Revit element parameters. Batch Plot & AutoExport for Revit helps automate printing/plotting on user-defined plot sets, and automate the process of extracting AutoCAD and Microstation files from Revit.

Worldviz (worldviz.com) attracted a lot of attention with its virtual reality solution for the AEC industry. The fully immersive system uses a head mounted display to help users navigate their way around architectural models in stereoscopic 3D.

An automatic tracking system synchronises movement in the real world with that of the virtual world and the results are very impressive, although a little disorienting for beginners. Users have a wide field of view (111 degrees) and are able to interact with objects as they walk through the virtual building. It is a great way for clients to fully experience new projects before they are built, but constitutes a serious investment.

The system is able to work primarily with 3ds Max and SketchUp data, but there is also a workflow to bring in BIM data from Autodesk Revit.

Finally, Integrated Environmental Solutions (IES) (iesve.com), a specialist in green building design software, was highlighting its recent partnership with Trelligence. The deal will help integrate the sustainable analysis capabilities of the IESVE performance simulation software with the architectural programming and schematic design capabilities of Trelligence Affinity.

In future it will be possible to carry out early stage sustainable analysis even when no geometry is available, through conceptual floor plans and stacking diagrams that are auto-generated from program data.

Designers will be able to figure out which floor-area-ratio is the most efficient before room layout is considered, then, the fast iterative design capabilities of Affinity will allow different early design layouts to be similarly tested.

Affinity’s integration with Revit will allow designers to continue to track the detailed design as it progresses against initial requirements.

Autodesk University would not be complete without the full complement of hardware. From workstations and graphics cards to large format printers and rapid prototyping technology there was something for everyone.

Nvidia (nvidia.co.uk) had its new Fermi graphics cards on show including the recently released Quadro 600 and Quadro 2000. Also in the spotlight was iRay and RealityServer from mental images, which use Nvidia GPUs to accelerate rendering times.

HP (hp.co.uk) showcased its Z series of workstations, and the new 2D and 3D DesignJet printers, while Dell (dell.co.uk) made a big splash with both its desktop and mobile Precision workstations.