Autodesk’s product portfolio of desktop and cloud services continues to grow. Martyn Day visited the company’s forthcoming new headquarters to find out what we can expect.

Autodesk Revit is becoming an increasingly powerful at concrete and reinforcement detailing.

Autodesk recently held an AEC summit in the AEC division’s home town of Boston. The purpose was to launch the new 2016 range of products, go through some of the developments taking place within the division, to take a look at the industry as a whole and identify trends.

Autodesk has long since removed itself from the big yearly release cycle by delivering in-stream improvements. However, a yearly release still provides an opportunity to go through the new features delivered and announce to its customers product news; and there is always lots of new products.

At the core of the Autodesk AEC offering sits Revit, which forms the basis of the company’s Architectural, Structural and Mechanical, Electrical, Plumbing (MEP) Building Information Modelling (BIM) offerings. As Revit has moved to Suites and subscription, its core development appears to have slowed as Autodesk adjusts to the ‘portion’ sizing of subscription releases.

The team has managed to find a lot more capacity to improve the core performance of the graphics, as well as opening files, viewing, printing and rendering.

By implementing changes to the graphics pipeline, Revit 2016 can now make some use of multi-core processing and, for the first time, can better harness the power of the GPU to provide some dramatic speed increases.

We understand another element of the performance benefit has come from stopping Revit from constantly checking if there have been model updates when only view manipulation has been done. This has lessened the load on the CPU and makes old models that may have previously pushed the limit of your hardware appear to be like the proverbial hot knife through butter.

There is a new physical-realistic rendering engine, which is really quick and replaces the old mental ray app for static images. Revit continues to use the Nvidia mental ray engine for functions such as walkthrough export, FBX export, and previews. IFCs can now be lined, and now use a reference geometry for snapping and reference. Structural and Steel detailing has been improved and MEP gets better links to fabrication.

It is possible to use LOD 400 content from Autodesk Fabrication products (CADmep, ESTmep, and CAMduct) in Revit to create a more co-ordinated models.

Autodesk’s ‘go to’ product for infrastructure design continues to steal all the limelight from Civil 3D, which rarely gets a mention these days.

Infraworks is undoubtedly a very cool application that seems to devour large data sets and allow interactions at game-like frame rates. We saw a demonstration on how in under ten minutes, the application could import and geo-reference huge and disparate data sets to combine and provide city-scale, spatial databases, which could be used for a variety of purposes, in addition to transport, traffic and drainage. This year’s release sees tighter integration with Autodesk’s other products, plus better DGN and IFC support.

Autodesk has been wrestling with the conceptual design part of the equation for a long time. SketchUp is still out there and, despite its basic nature, is one of the industry’s most popular tools. Autodesk’s answer, FormIt, is a slick application for desktop and mobile but was, until now, still embryonic in development.

The company did not stop there, by hooking these up with the cloud, you get FormIt 360 Pro, which can use Revit components and adds in solar analysis and model collaboration. This not only links conceptual with BIM, but driven by generative design and guided by analysis, we can actually have the computer ‘aid’ the design process as opposed to just document it. 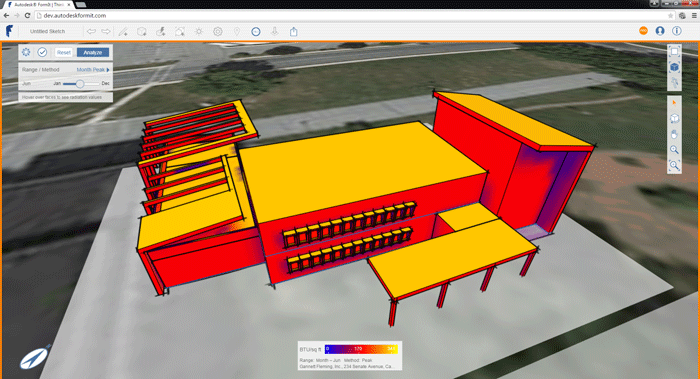 Autodesk is laser focused on bringing cloud services to the AEC design environment. Every year there are more ‘360’ solutions, which means they are, in some part or wholly, online services. So they are available everywhere — from the drawing office to onsite, on desktops and via mobile devices. This year’s additions include BIM 360 Plan for scheduling, BIM 360 Docs and BIM 360 Enterprise Insight.

BIM 360 Plan is based on lean construction principles and provides an easy to use front end to collate construction plans across multiple teams and disciplines, displaying commitments, deadlines and hand offs. The software tracks performance metrics by phase, trade or location. 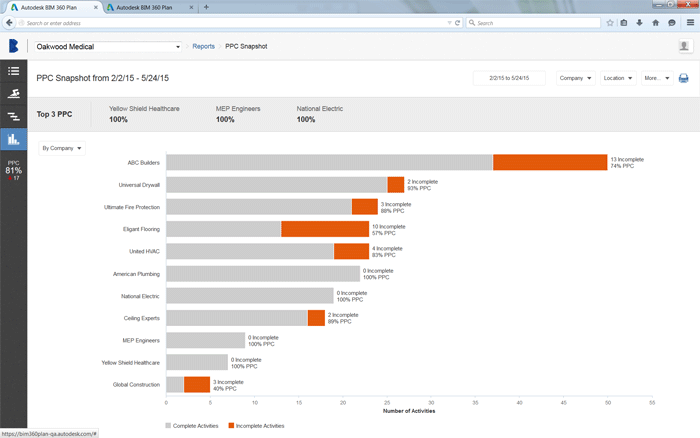 Autodesk BIM360 Plan brings Autodesk into the world of construction planning and management.

BIM 360 Enterprise insight is pretty much a company-wide view of projects with dashboards for analysis. There are many serious players in this part of the construction market already and it will be interesting to see how Autodesk fairs.

We also saw a new application called Autodesk Building Ops, which oddly does not have a 360 in the title. This may be because it is a mobile application that feeds data back to operations?

Building Ops is Autodesk’s first foray into the sleepy world of Facilities Management (FM). It is a mobile-first building maintenance app aimed at contractors for snag list management and for building managers operations to manage day to day asset, maintenance and operations tasks. It has a fairly simple interface, and offers a basic job ticketing system, with reminders for upcoming, overdue, awaiting parts and completed.

Autodesk gave a brief demo of another up and coming cloud-based technology called ‘Akaba’. Here, instead of using the computer to draw the geometry, the aim is to tell the computer what the end goal should be and let it come up with a number of solutions.

By inputting a range of rules and constraints, like the number of bedrooms, bathrooms, energy usage, amount of light per room, minimum square footage of each room, site boundaries etc, which all compete, Akaba will generate the geometry and arrangements that solve the brief. The designer is able to select the one which is most appealing and then iterate again or detail or massage the design.

Project Akaba has a very clean interface with an entry point for Goals, and Project criteria, using sliders. The main display shows an array of solutions organised by score of meeting the initial design goal. This really is exciting stuff. Autodesk has similar plans for Urban-level city planning tools. 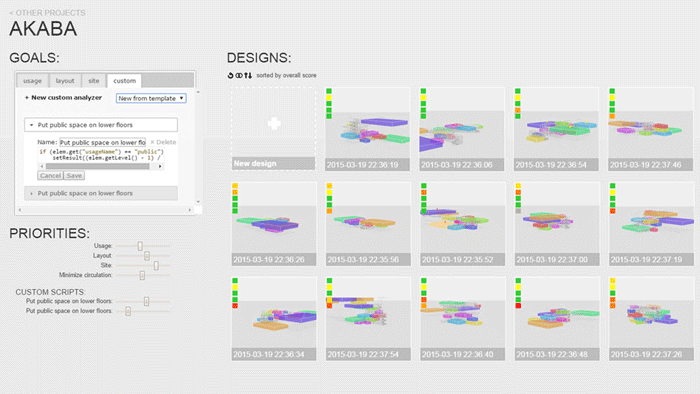 Looking at the real innovation coming out of Autodesk’s AEC team at the moment, indicates that a lot of the work being done in trying to solve the conceptual conundrum. While CAD has been great for documentation, conceptual products have typically not offered that much improvement over pen and paper and yet it is here at the early stages that most of the bad decisions are made. With Dynamo and FormIt Autodesk is tackling the geometry of conceptual design and while it is taking a while to get there, the addition of analysis means the company will soon provide a suite of powerful tools to give architect’s real insight into the performance of their buildings. Add Project Akaba into the mix and computers will finally amplify a designer’s talent.

Developments would also indicate that Autodesk is keen to drive further into the construction and post operation side of the business, although here Autodesk will be operating in markets that already have many large players offering mature point solutions. It still baffles me how Autodesk does not really have an industrial strength document management system to pull all of this together.

Revit has seen some good software architecture improvements this revision, which is bound to be a big crowd pleaser, although core architectural functionality has only seen minor updates. Steel, Concrete and Fabrication see the best enhancements.

Looking at Autodesk’s Manufacturing division with new products like Fusion, which reside in the cloud and are clearly meant as a replacement for Inventor, I can not clearly see what the AEC team is going to do when it comes to getting Revit on the cloud, or coming up with a new code stream that leverages contemporary computer programming and computer architectures. The AEC sector is notoriously slow moving when it comes to technology change so perhaps the company does not feel the pressure to refresh, and for the majority of the market this is probably fine.

I just can not help thinking what second generation BIM tools will look like and I regularly meet advanced users who are pushing today’s software beyond to their maximum capabilities.

New offices Autodesk’s AEC team is currently centered in Waltham which is on the outskirts of Boston, in a fairly typical office building. With the changes at Autodesk HQ in San Francisco, which had an entire Pier of fabrication and workshops added for employees and local customers, the AEC division has decided to relocate to downtown Boston and have its own workshops. 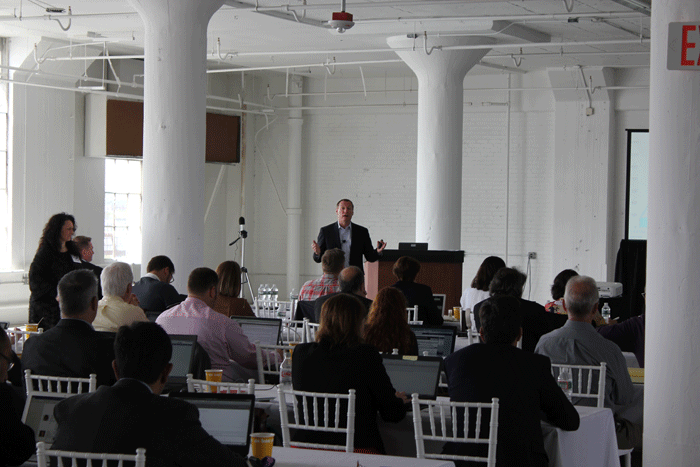 Located in the North End area Autodesk’s new building looks out onto the inner harbour, and is due to open next year. The AEC summit was held in one of the as-yet untouched spaces, which, while being just a shell, will be a really impressive space once completed. The main problem for Autodesk here is, as it is the AEC division moving in, there are many ex-architects turned employees that will want to have their say on the refit and layout! Janet Echelman Autodesk took us to see an art installation at Boston’s Rose Kennedy Greenway. The work by Janet Echelman, called ‘As if it were Already Here’ is handmade from over 100 miles of tensioned, coloured rope, tied together with over half a million knots, suspended between three downtown skyscrapers. The net forms three voids, which represent the three hills that were raised to create Boston Harbour 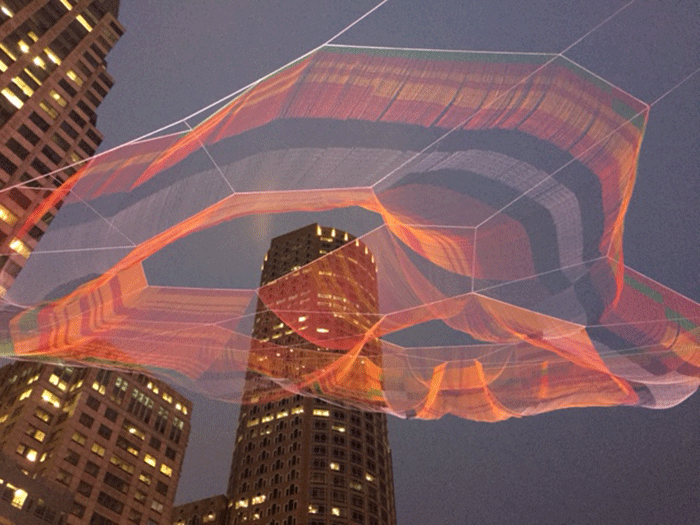 As If It Were Already Here” by Janet Echelman, is suspended over Boston’s Rose Kennedy Greenway from May until October 2015. Custom code in Maya allowed Echelman to visualise the sculpture before making it.

Echelman first came in contct with Autodesk while giving a lecture on her work. Autodesk CEO Carl Bass and CTO Jeff Kowalski were in the audience and, when she mentioned how hard it was to model the elastic motion of her work, they offered to help develop a tool to model her designs. Using Maya, Autodesk wrote a plug-in which enables her to more easily explore net densities, shape, and scale, and simulate the effects of gravity and wind.