The Varjo VR-1 ‘human-eye resolution’ VR headset launched earlier this year. And we were very impressed. Now Varjo has expanded into mixed reality with the XR-1 Developer Edition, a headset which it says achieves the dream of ‘Hard AR’ where you can no longer tell apart what is real and what is virtual.

For architecture, Urho Konttori, Chief Product Officer and co- founder of Varjo sees a future where mixed reality could be used to see how a proposed building would look in the real world. You could remove the existing building to see how the new design would look in its place, he said.

The XR-1 is different to other mixed reality headsets like the Microsoft Hololens in that it uses video-pass-through. Instead of projecting 3D holograms onto a see-through display, the XR-1 captures the real world using a pair of front-facing 12-megapixel cameras and then combines this video with virtual content to show the combined result on the headset’s immersive display. To ensure virtual objects are rendered in the correct position, built in depth sensors map real-life objects and environments.

Varjo says there are several benefits to its approach to mixed reality. First, users can switch seamlessly between mixed reality and full virtual reality modes, so the headset has multiple uses. The quality is also better. Unlike competitor devices that deliver mixed reality with ‘ghost-like, semi-transparent renderings in limited view’, the XR-1 enables ‘photorealistic mixed reality in a full field of view’. Varjo states the the XR-1 offers 82 degrees compared to competitive see through devices which offer 30 and 40 degrees.

Furthermore, Varjo claims that with the XR-1, virtual objects appear as real as anything in the physical world and can themselves cast shadows or even illuminate reality. Black objects appear truly black, opaque objects block real or virtual light, and semi-transparent objects will refract the light from the real world behind it.

“XR-1 brings all the convenience of seeing your body as well as the real world around you and being able to look at your colleagues while designing a virtual object or environment,” said Konttori. “The XR-1 can show mixed reality with true-to-life fidelity you can only achieve using video-pass-through. Lifelike mixed reality is quite literally impossible to achieve with optical-see-through systems like HoloLens.”

Meanwhile, Swedish auto maker Volvo Cars has been testing XR-1 prototypes since summer 2018. Its engineers are taking real cars out on test drives while wearing an XR-1 headset, so they can assess the interior designs of future cars before they are built.

“With Varjo XR-1, we can start evaluating designs and technologies while they are literally still on the drawing board,” said Henrik Green, Chief Technology Officer at Volvo Cars. “Instead of the usual static way of evaluating new products and ideas, we can test concepts on the road immediately. This approach offers considerable potential cost savings by clearing bottlenecks much earlier in the design and development process.”

The XR-1 is not yet a commercial product. It is expected to ship to mixed reality developers, designers and researchers in the second half of 2019.

Varjo will be exhibiting at NXT BLD London on 11 June. 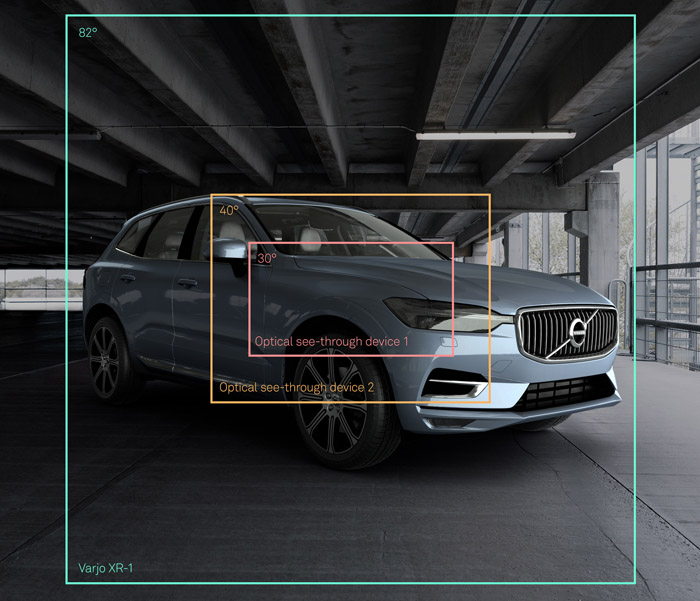