Out of all the various software technologies that are deployed in the AEC market, visualisation undoubtedly moves at the quickest pace. It is driven by advances in the games industry, graphics hardware, and a plethora of VR and AR developments. Today with increased competition, the net result is regular big improvements to provide amazing on-demand high-fidelity images at incredible speeds, together with VR on demand for both making design decisions and selling projects to customers.

When it first launched Enscape redefined ease of use with a simple ‘one click’ approach to generating photorealistic real time environments. It is one of the most popular viz-focused add-ons for Revit and SketchUp. More recently, it has added support for Rhinoceros and ArchiCAD.

Typically, architects work on designs with their BIM tool of choice and, with one click, Enscape delivers high-quality real-time environments to explore for instant design feedback. The software can also create video walkthroughs and VR experiences in a single click. These can also be sent to clients as a self-extracting executable, without the need for an Enscape licence, or turned into a WebGL-based website.

With an aggressive upgrade cycle, this is the second release of the year. Its capabilities have continuously improved and expanded. The latest release does not disappoint.

Enscape is different to most other real time renderers in that is uses elements of ray tracing. The results approach photorealism but are not as accurate as those from a dedicated ray trace renderer like V-Ray.

For the new release it has overhauled and enhanced the lighting and reflection algorithms. This delivers speed improvements and also improves the product’s reflection fidelity, meaning geometry which is offscreen or obscured by other objects can reflect in high detail, within the scene.

Texture maps are now more accurately displayed, as well as cutout materials, which now appear reflected in mirrors and other reflective surfaces, together with any corresponding shadow. Light sources are also better represented in reflections. Interior lighting has been tweaked to produce more natural results, with less light leakage and more pronounced indirect shadows.

Enscape added support for ArchiCAD in June 2018 (2.3). This release brings a major improvement for users of the BIM tool, now supporting the Enscape Material editor, enabling access to, and editing of, the full spectrum of material parameters. New controls for bump maps, which were previously not supported in the native ArchiCAD Surface Editor and a roughness editing tools can help finish off a scene by making it looked lived in.

Scenes need more than just high-quality materials and lighting to give a feeling of reality. It’s important to be able to add assets quickly and easily to dress the scene. With Epic Games acquiring TwinMotion earlier this year, competition is heating up and Enscape has responded by dramatically adding to its asset library. 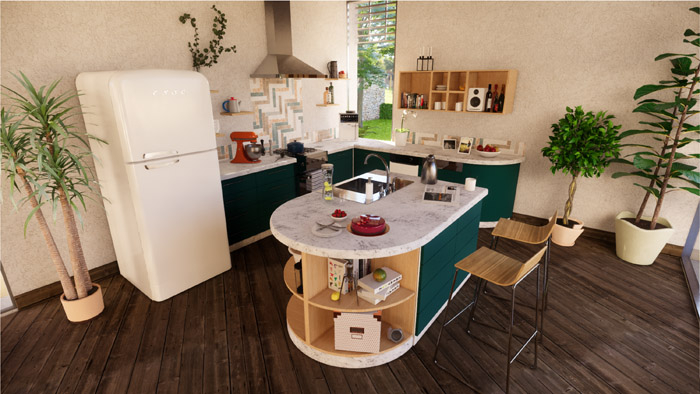 Additionally, Revit users now have expanded placement options: on a surface, on an active work plane or linked to an existing Revit family. There are standalone files for each of the categories, so users can browse the asset groups before placing them in a project.

Enhanced Settings In previous versions of Enscape, the scene settings were stored separately to the BIM model. This meant that when moving data from machine to machine, the Enscape Settings for the model did not match the original intent.

It’s now possible to save the settings within the CAD file, so you can share your model with other Enscape users, who can repeat the same render and get the same results. It’s a small feature but very useful for teams. It’s also worth noting here that in settings there is now support for numerical input in addition to sliders.

Nvidia’s new GPU-accelerated physically-based RTX rendering technology looks set to revolutionise high resolution, real-time photorealism. Those of you that attended NXT BLD this June will have seen a number of talks demonstrating the potential benefits of RTX-assisted rendering on desktop and mobile workstations.

We were fortunate to have Enscape’s co-founder Moritz Luck, showing an early ‘work in progress’ version of 2.6 on an RTX-enabled laptop, where Enscape smoothly rendered a very large and reflective building model in real-time, while the camera flew about the site. It was interesting to see the quality improvements delivered by RTX, specifically around reflection.

However, before you get too excited, at the time of going to press, the RTX acceleration in 2.6 was disabled, due to some stability issues being sorted out by Nvidia. We have been told this will be enabled in an update soon.

There are already some enhancements to the existing ray tracing engine in 2.6, but RTX will take ray tracing in Enscape to new levels of quality through physically accurate reflections and diffuse, indirect lighting.

There is an array of other smaller features for this 2.6 release. It’s possible to reduce the memory usage by down-sampling some of the larger textures, there have been improvements to all sun shadows. Oculus Rift S controllers are now supported and are visible during VR sessions. Enscape 2.6 is now available for download and comes with support for Revit 2020.