With a new graphics technology at the heart of its Xeon E3-1200 CPU, Intel is taking the fight to pro graphics veterans AMD and Nvidia

Intel will be targeting users of 3D CAD/BIM applications, such as Autodesk Revit

Intel is starting to take professional graphics very seriously with a new embedded graphics technology that it claims almost doubles the performance of the one it replaces.

Intel HD graphics P4600 was first embedded in Xeon chips in 2012 and is widely regarded as being for entry-level 3D CAD and BIM. By doubling the performance and essentially giving Iris Pro Graphics P6300 away free with the new Xeon CPU, Intel hopes to grab a bigger slice of the entry-level to mid-range graphics sector, which is a sweet spot for CAD and BIM.

AMD and Nvidia, whose professional AMD FirePro and Nvidia Quadro graphics cards are used extensively in workstations and servers, will be watching closely.

While raw performance is essential for 3D CAD, Intel will know it still has a job to do to match the years of investment both AMD and Nvidia have in driver development. It will need to demonstrate that its graphics technology not only delivers smooth interactive 3D graphics, but also stability and full support for the features on offer in modern CAD and BIM applications.

Intel told DEVELOP3D that it is currently working with “all the leaders” in the CAD market to get the new Iris Pro Graphics P6300 certified, but did not say which applications.

Even though Intel announced the ‘Broadwell’ Xeon E3-1200 v4 CPU at the beginning of June, there has been no news since of any workstations with this chip. This could mean the likes of Dell, Lenovo and HP skip the delayed Broadwell Xeon E3-1200 altogether, in favour of Intel Skylake, which is rumoured to be out soon.

Skylake, a ‘tock’ in Intel’s ‘tick-tock’ processor release cycle, is a major microarchitecture redesign (Broadwell, a ‘tick’, is a refinement of its predecessor Haswell), so this would make perfect sense. As a result, we may have to wait a little longer before Intel Iris Pro Graphics P6300 is available in the entry-level workstations that will replace the Xeon E3-1200 v3-based Dell Precision T1700, HP Z230 and Lenovo ThinkStation P300. 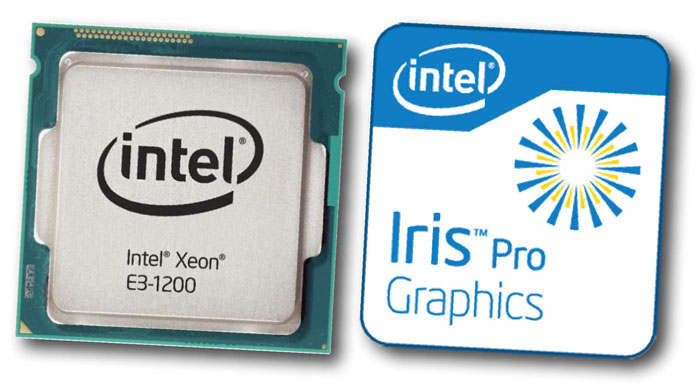 In addition to workstations, Intel expects its Xeon E3-1200 series CPUs to play an increasingly important role in the datacenter, where CAD software runs on rack servers and users access the software remotely on thin or zero clients.

Intel says that with four CPU cores and integrated Iris Pro Graphics P6300, a single Xeon E3-1200 v4 CPU is able to well serve the needs of a 3D CAD user over a one-to-one connection. Intel partners, including HP, Supermicro and Cisco, already offer 3U servers that can host 12 Xeon E3-1200 v3 CPUs, each with their own motherboard, memory and Ethernet, so firms should also be able to achieve good user density in racks.

The relative simplicity of a one-to-one connection could appeal to SMEs that want the benefits of a datacentre solution (including workflow, collaboration, IT management and data security) but don’t want to get involved in the complexities of a Virtual Desktop Infrastructure (VDI) deployment which also means investing in high-end Intel Xeon E5-2600 v3 CPUs, powerful Nvidia GRID GPUs and a virtualisation software stack.