3D Repo has turned to the latest gaming technology to enhance its cloud-based BIM collaboration software. Version 2.0 features a new rendering engine, based on the popular Unity gaming platform, that improves 3D Repo’s memory footprint and also unifies the BIM solution across the desktop, web and VR devices, so all new features are simultaneously accessible across all platforms.

“In recent years, Unity has become a popular platform for the development of a broad range of visualisation and VR applications due to its ease of use, cross-platform compatibility and accessibility,” commented Dr Jozef Dobos, CEO of 3D Repo. “However, within these applications, 3D assets are generally bundled with executables or streamed in a proprietary format, making frequent changes in design within the AEC industry impossible.

“Within a rapidly changing construction project this just isn’t good enough, which is why we devised the 3DRepo4Unity library, which is more flexible, platform agnostic and can be extended to other game engines, too,” he continued. “What is more, our solution allows access to the underlying metadata and engineering information that is simply not possible using Unity alone. That is because Unity natively incorporates only ‘dumb’ geometry in file formats such as FBX.”

Incorporated into the latest version of the 3D Repo collaboration platform – 3drepo.io v2.0 – the newly developed technology allows 3D asset models to be dynamically loaded from a remote, version controlled repository, such as the 3D Repo online knowledge base, and accessed from any web enabled device.

The new version of the open source BIM collaboration platform generates dynamic resources – or ‘knowledge packages’ – from a remote repository. The 3D Repo viewer easily visualises 3D revisions from the cloud without any previous knowledge of the assets, all in real-time. The use of the Unity game engine also improves the memory footprint of the 3D Repo solution as, once the data is loaded into the GPU memory, the main CPU memory is freed and available to power other applications required by the user. The new system is now available to try free of charge. 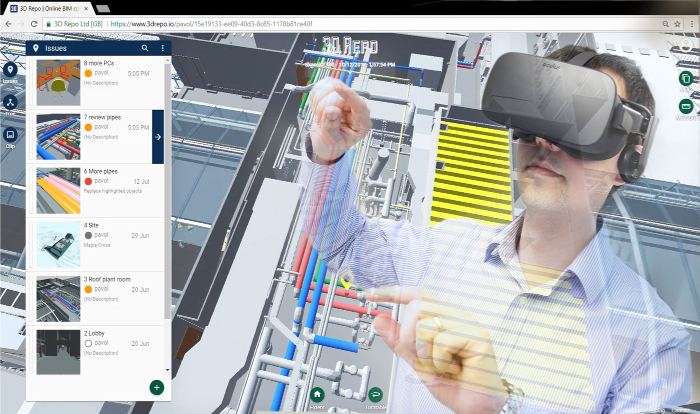