AMD has cut the price of its recently released FirePro W-Series GPUs, the most dramatic being the high-end FirePro W8100, which will be available for $1,249, half that of its original MSRP.

The company has also extended its ‘Experience AMD FirePro’ program to December 31 2014, where first time customers can get up to 50% off a single purchase.

For high-end users the AMD FirePro W8100 delivers an interesting proposition, particularly at its new price point, as it can deliver advanced 3D graphics and GPU compute capabilities at the same time. It can number crunch its way through a ray trace rendering or FEA simulation and still be responsive when the user wants to rotate a 3D CAD model on screen. This gives users an alternative to buying a second CPU, so long as their application supports OpenCL.

AMD has also aggressively cut the price of its mainstream CAD card, offering the AMD FirePro W5100 for $399, around 50% less than Nvidia’s Quadro K2200.

Full prices are below (US MSRP / current retail price from scan.co.uk)

Read our AMD FirePro report to learn more about the new GPUs.

Meanwhile, AMD has reported a growth in market share, breaking the 20% barrier for the first time, according to recent figures from Jon Peddie Research. Sales of the Apple Mac Pro contributed to this increase, but AMD was not able to say how much.

The company has also reported a significant improvement in the quality of its driver, with customers reporting less than 50 defects per million units shipped for three years straight. AMD said that a lot of these ‘driver issues’ were in specialist use cases involving scenarios such as multi GPU, framelock / Genlock. Continuing this theme, AMD said that when it has access to test ISV test suites for certification it has achieved 100% first pass for its AMD FirePro W5100. From an industry standpoint, it said this was exceptional. 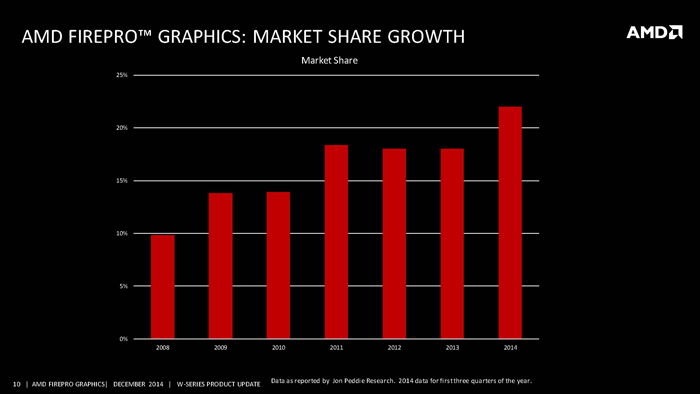 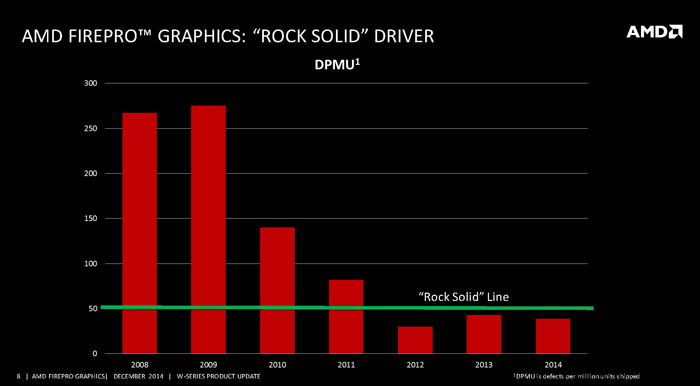