Microsoft has launched two new ‘Surface’ machines that are capable of running 3D CAD software, including Siemens NX and SolidWorks.

This includes the Surface Studio, a desktop ‘workstation’ with a built in 28-inch screen and a new Surface Book laptop / tablet that boasts double the 3D graphics performance of the original Surface Book.

As with all Microsoft Surface hardware both machines are designed for sketching on screen, using applications like Autodesk SketchBook and Alias. However, the pen, which features 1,024 levels of pressure sensitivity and an eraser, is now joined with another peripheral, the Surface Dial.

The Haptic Device is not only designed for quick scrolling, zooming and navigating, but when placed directly on the display, it brings up a set of radial digital tools tailored to specific apps. Microsoft states that Siemens PLM Software has already optimised its software (NX) to take advantage. 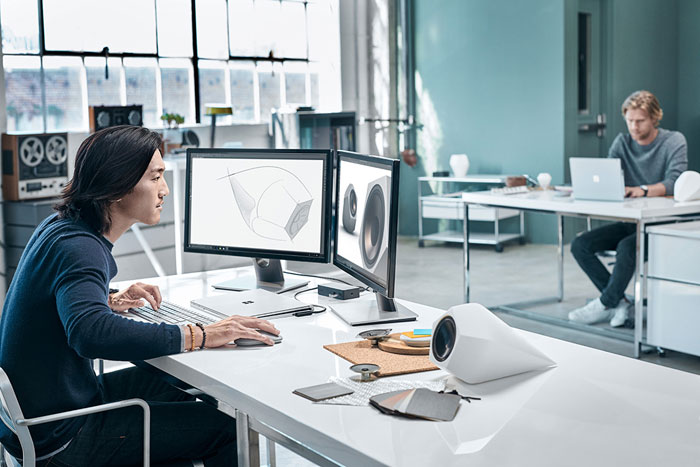 The introduction of the all-in-one Surface studio workstation is an interesting move from Microsoft. Comparisons are being made to the iMac, but Microsoft has much bigger aspirations for the creative industries. Apple’s all-in-one does not have a touch capability, nor such a powerful GPU.

The Surface Studio is possibly best described as a cross between the HP Z1 G3, a 24-inch all-in-one 3D CAD workstation, and a Wacom Cintiq 27QHD Touch interactive pen display.

Uniquely, for a machine of this type, it looks capable of supporting designers and architects from the initial concept sketching stage all the way to detailed 3D CAD work.

The Zero Gravity Hinge makes the transition from Desktop Mode to Studio Mode (a 20-degree drawing board position) effortless.

The 28-inch, 10 point multi touch PixelSense Display looks impressive with a beyond 4K resolution of 4,500 x 3,000 pixels and a 3:2 aspect ratio, which is designed for a more natural sketching experience.

As the Surface Studio’s ‘computer’ is built into the base, Microsoft has made the display extremely thin – only 12.5 mm. It claims it is the thinnest LCD monitor ever built at this size. 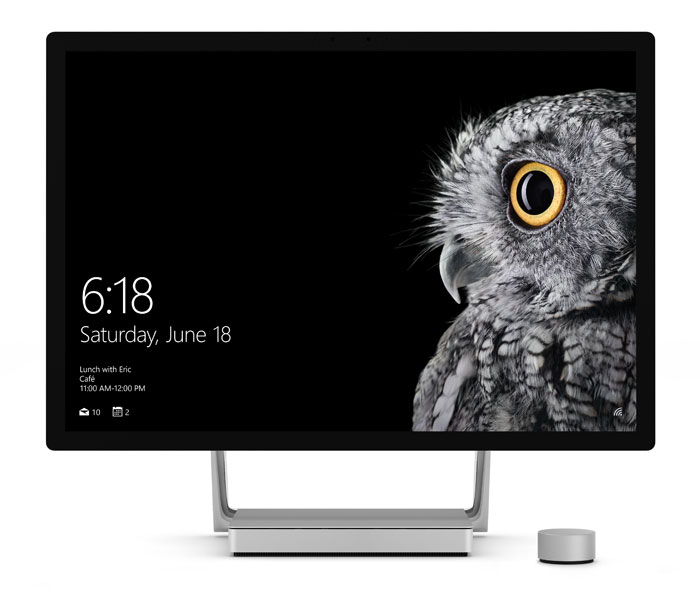 Eyebrows have been raised over Microsoft’s choice of GPUs, an Nvidia GeForce GTX 965M or NVIDIA GeForce GTX 980M. Both are very powerful GPUs and should be more than capable of accelerating demanding 3D CAD applications – even though they are not designed to do so, as they are actually meant for gaming laptops.

Traditionally, CAD workstations feature a professional GPU, such as Nvidia Quadro or AMD FirePro. While these GPUs feature almost identical silicon to their consumer counterparts they differentiate themselves through their drivers – and the support that users get when using them.

CAD software vendors have traditionally not certified machines with Nvidia GeForce graphics. However, Siemens PLM Software told DEVELOP3D that it is working on a certification for (NX) and will give full support to customers that use the Microsoft hardware.

It will be interesting to see if Dassault Systemes follows a similar path for SolidWorks, the other CAD product specifically mentioned by Microsoft at launch.

If the Surface Studio is not certified (and even if certified with a standard GeForce driver) users may not get access to SolidWorks RealView, the real time rendering engine.

Microsoft’s decision to go for a consumer GPU, rather than a professional GPU presumably comes down to price. Pro graphics always comes with a premium, particularly at the high-end, and this is one way to stop costs escalating. While prices start at $2,999 for an Intel Core i5 and 8GB RAM, serious CAD users are more likely to need the top end $4,199 model with an Intel Core i7 and 32GB RAM.

UK prices have not yet been announced but, with a week pound, UK customers could end up paying close to those prices in sterling.

Both Surface products are available for pre-order. 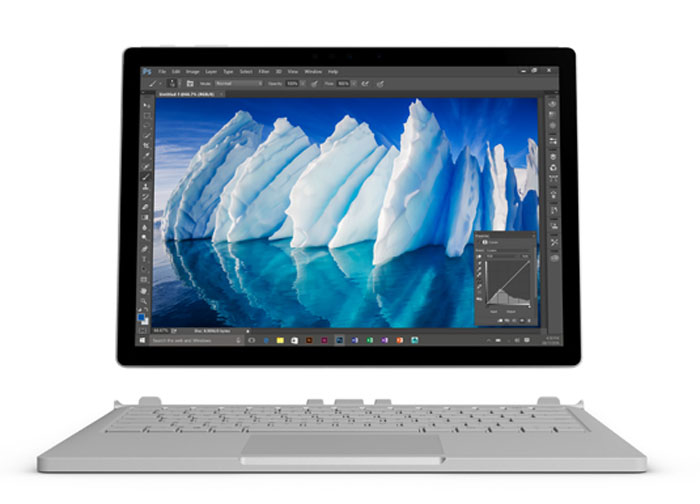 The new Microsoft Surface Book – a laptop with a detachable screen