At the recent Shape To Fabrication conference Bob McNeel, CEO of Robert McNeel & Associates, was his usual straight-talking self when quizzed about the future of Rhino, including the Mac version, the cloud, parametrics and Grasshopper.

Q: Are you busy working on Rhino 6?

Bob McNeel: The answer is no; they won’t let me touch the code!

We try to get something out in the field as soon as we have something that’s stable enough to use, and they’ve been working on since shortly after Rhino 5 came out.

Of course there’s always service releases and other distractions to slow it down, but there’s been a lot of work going on — particularly on the back-end, on the parts that they want to overhaul, messy bits of code that have been there since version one, things like that, which you can’t do in the middle of a service release.

There’s probably not anything that is earth-shaking in terms of brand new sparkly features, but at least we’ve got something that doesn’t tip over when you try to run it.

There are a few people that want to get something out when we get back, I don’t know if we’ve got everything in place to do that yet, and I try not to make promises for things.

Q: How is the Mac version coming along?

BM: This is another place where we need a little bit of expectation control. As some of you know, porting from one platform to another is a major project.

Also, Rhino is a very deeply embedded Windows product; we use a lot of Windows resources. The tag line for the first 20 years was something like ‘Nurbs modelling for Windows’. So it’s been a bit of a chore to untangle a lot of Windows code.

There are a lot of development tools for the third-party applications — there’s just no one-to-one correlation. Initially we’re probably not going to see any third-party products available for it right away, because not only is there a lot more work for us to port it, but it’s going to be a lot of work for third party developers.

Some of our products, particularly Grasshopper, is very much a Windows-based product and it will take quite a bit of time to get that untangled and ported, so that’s not going to be available first release either.

Q: Will it be available in the Apple App Store?

BM: Correct me if I’m wrong, but if we put something in the App Store we don’t get to provide a SDK or plug-in architecture, so my guess is that we’re not going to distribute it that way.

Q: When is it likely to ship?

BM: We’re pretty feature complete in terms of what we think we can get done reasonably for version one.

Q: Is Grasshopper 1 going to be a part of Rhino 6?

BM: That’s the idea. One of the things we’re trying to do is to provide a stable development platform for people who are developing for Grasshopper so that there’s not a situation where it’s a ‘moving target’.

We’re going to try and get that wrapped up for Version 5 so that there’s a stable version there as well. We’ll move that forward on to 6 as well as Version 6 being the development platform for Grasshopper 2 — some of that work has already started.

BM: 2D drafting or drawing is always something that’s on our list of things to upgrade, so you will see some continued improvements there in Version 6, there’s quite a bit of work going on on that front.

We’re not particularly paying any attention to any other product in the terms of how it works. Really we’re dealing with the feedback we’re getting from people, what they’re asking for, what their workflows are.

Q: With other vendors increasingly focussing on the cloud, how are you approaching it?

BM: We watch these things, there’s some interesting things going on there — from my perspective you think about it like porting to another development platform, it’s probably as much if not more work than it was to port to the Mac.

It doesn’t seem to be something that people are demanding immediately, I think people have ideas that it’s the solution for problems they have, particularly when working with large data sets or large work groups, and I certainly want to make sure we address those problems over time.

If using cloud technology helps that then we’ll take advantage of it, but we’re not looking at the cloud or software as a service as a platform that we’re going to port to any time soon.

Q: Are you considering a neutral file format to help with architects using the variety of different software in projects?

BM: Our strategy has been to leave that up to third-party people with domain expertise in that area.

Industry Foundation Classes (IFC) or Building Information Modelling (BIM), or the standard name for BIM I think now is ‘Revit’ I’ve heard I think there are some people that believe that anyway, the transition from pure geometry into that structured environment with all the additional information that supports that process requires a whole layer of stuff, not just a file format export.

There are several third-party products as well as in-house tools that people use to move things down that pathway. It doesn’t seem like anybody has converged on a standard way to do that, there looks like there’s quite a few useful tools out there to do that now.

Our focus has been on helping those developers out in any way we can.

Q: Have you considered virtual reality?

BM: One of the things we’ve tried to do is provide a lot of hooks in the SDK layer and interface layer so for developers all that stuff is pretty open, and I think things like stereo and interface devices are accessible to developers.

We’ve experimented with a few [virtual reality devices] but we haven’t really found a use case that makes any sense. The best examples I can come up with are the ‘stereo swim-goggles’ [by Occulus Rift], which are really fun and interesting, until about 20 minutes into it I started throwing up!

BM: That’s one of those things that seems like, in order to get an interface that makes any sense, you have to focus on a particular discipline. To put a parametric engine behind it you almost have to start thinking about what your user interface is going to be and it starts to turn in a certain direction for some people.

As far as back-end tools to support that we’ve looked at things like constraint engines to make sure people can hook those kinds of tools in to Rhino, but beyond that it’s probably not some place we’re going to go anytime soon. rhino3d.com

With a focus on cutting-edge technology, innovative construction and applications in architecture, and engineering, the Shape to Fabrication conference attracts professionals pushing the boundaries of design. April’s event was held in Stratford on the doorstep of London’s Olympic Park.

Given its location near London’s 2012 Olympics site in Stratford, it was fitting that Shape to Fabrication 2014 included a number of sessions on build requirements for Olympics venues, such as structural challenges at the Olympic Aquatics Centre and design and build requirements of the Arcelor Mittal Orbit.

The common theme was the use of Rhino 3D CAD and its offshoot plug-ins, from Metron, which built the Great Britain cycling team bikes, to Speedo’s Team GB swimsuits and aerodynamic swimming goggles. 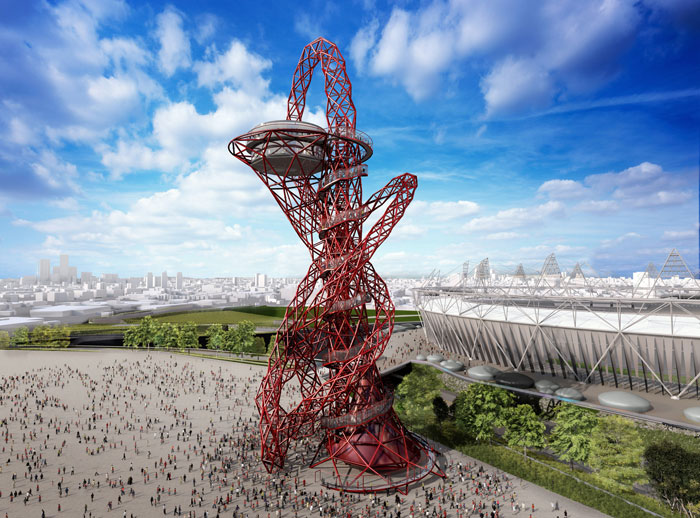 Rhino as a conceptual design tool was integral to Arup’s Arcelor Mittal Orbit.

Artist Anish Kapoor’s vision was brought to Arup in three sketches. Rhino was used to focus the project on to one twisting, spiralling design.

Arup used Grasshopper within Rhino to control and modify each design stage, such as the angles of the arches and spacing of the visitor staircase.

Having adapted the original tubes into a lattice structure based around giant star-shaped nodes, the design was moved into Tekla for manufacture.

With the finished structure only metres away from the event venue, those that attended Shape To Fabrication will have left looking at the giant red structure, shaped like a musical ‘bass clef’ in a much more appreciative light.

The concept is reminiscent of a grounded alien spaceship. Mr Ceccato called it a “gestural piece that has to be turned into something viable”.

Mr Ceccato explained how the initial design had seen countless iterations, which all had to be paired back to account for vast numbers of variables.

His overall message was that, instead of standardising on a single software, architects should follow a process that can be adjusted to accommodate the nature, size and documenting process for all involved. 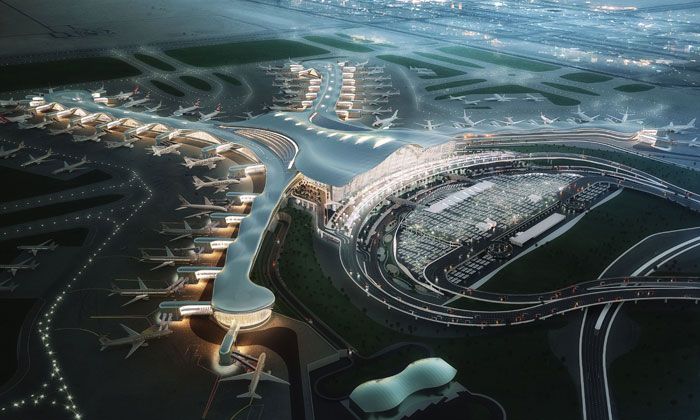 From sport to space

The 700,000m2 building has a 50-metre high ceiling; gargantuan by any standards (and so vast it was covered in two separate talks).

Mr Bothma set out some cold realities of document management and the perils of working on build projects halfway around the world.

He reeled off at length the many challenges regarding file management, clash detection, compatible file formats and design optimisation.

The round-the-clock build process, created 100,000 shop drawings to review, and copious Requests For Information (RFI) documents that had to be resolved within the space of five days in order to avoid delaying construction.