As the surveying industry develops, a greater number of ingenious applications of the technology are making waves

Laser scanning is just going to get ‘cooler’ every year, wrote AEC Magazine’s Martyn Day in January/February’s Scan-to-BIM article. Hopefully this does not mean that Plowman Craven surveyors insist on the latest designer Hi Vi and safety glasses before starting on site! It does, however, mean that the technology is rapidly developing and the race to understand what is available, and how best it can be applied, intensifies.

BIM has brought excitement to the surveying industry and with it some uncertainties. Embracing and adapting to the challenges of BIM will be the difference between ‘opportunity’ and ‘threat’, and organisations are now under constant pressure to keep informed and on top of advances in laser scanning applications. This is crucial as clients’ understanding and demands evolve.

Yes, scanning is getting ‘cooler’ and surveyors love playing with the latest toys and trying to find different ways of applying the technology. The skill is understanding where there is real benefit to be gained and the most appropriate technology for the task ahead.

Development / progress in the field of terrestrial laser scanning has been rapid and concentrated in three main areas — range, speed and reliability. Range has increased gradually, however the speed of laser scanners has increased dramatically over the last ten years. They are now more reliable, smaller and cheaper, allowing greater flexibility in application and increased market exposure.

Terrestrial Laser Scanning is part of the surveyor’s standard tool kit and used for a multitude of applications whether for urban streetscapes, refurbishment and retrofit projects and new developments. It is the surveyor’s way of bringing the existing environment into the BIM world.

Laser Scanning is as applicable to rail as it is in the built environment. The combination of laser profiling and a railway trolley has allowed surveyors to capture point cloud data while on the move. This complex data capture technique allows surveyors to push a trolley at walking pace along the fixed rail, capturing data as they go. Point cloud data is captured at the same time as traditional track measurements such as Cant and Gauge. The recent integration of inertial measurement units (IMUs) to the trolley systems has allowed surveyors to increase the distance between control points and to capture more data in a given track possession.

This can be applied to both aerial (Lidar) and vehicle mounted applications. Achievable accuracies have considerably improved over the last few years, particularly relating to vehicle-mounted, which are similar to terrestrial capabilities. The ability to cover large areas in a short space of time, safety for operators and negating the need for infrastructure closures lends itself to highways and bridge applications. 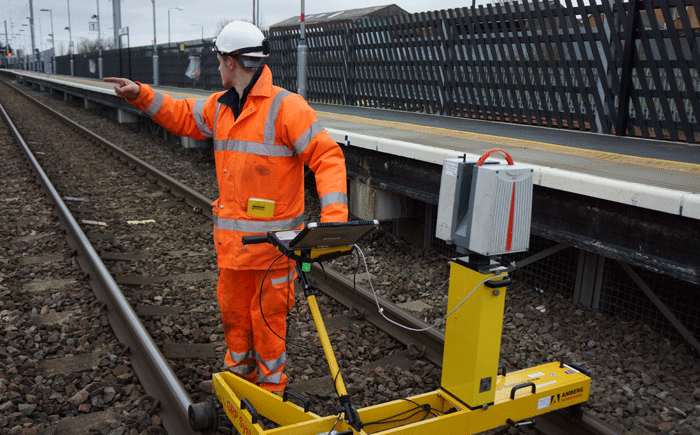 Laser Scanning is as applicable to rail as it is in the built environment. The combination of laser profiling and a railway trolley has allowed surveyors to capture point cloud data while on the move

A vehicle mounted mobile mapping system is usually built up of six core components. These are laser profilers, cameras, video cameras, an IMU, an odometer and GPS (GNSS) receivers. Data from all of these sensors in combination with ground control points allows point cloud data to be captured from a moving vehicle. This is typically a car but can, in principle, be any moving vehicle.

The complexity of these systems makes them very expensive, however developments in this field are starting to bring pricing to an accessible level for a less specialist market.

Drones are riding a wave of popularity at the moment, and are the real ‘cool dudes’ of the industry, but they also play a real part in reality data capture. Reduced cost has made this technology commonplace in a wide range of sectors including agriculture, mining, military, surveillance and consumer recreation. We are seeing real benefits for site investigations, construction program assessments, condition surveys and surveying areas which were previously inaccessible.

UAV systems typically carry a range of sensors including GPS (GNSS), photographic, infra-red, hyperspectral and thermal cameras. The quality and size of the sensors being carried is typically limited by the lifting capacity of the UAV itself. At the cutting edge of this industry are those developing UAV systems able to carry laser scanning systems. Systems typically lift lightweight laser scanners such as the Faro x330 and Riegl VUX-1.

This technology is still in its infancy and still has to overcome barriers from authority and public suspicions plus increased safety education, but it has a great deal of potential within the industry as a whole.

Indoor mapping is another arena where there has been rapid progress. This technology is driven by a range of players including developers of bespoke devices and smartphones.

The industry is underpinned by the development of Simultaneous Localisation and Mapping (SLAM) technology. In simplistic terms, this technology relies around computing the sensor’s location and using this to map the environment around the sensor in real time. This technology was initially developed for robotics applications and is currently being used with autonomous vehicles, UAV and planetary rovers.

Systems such as the Zebedee developed by CSIRO and the MID by ViAmetris are known systems in this arena, and large players like Google are entering the market with its recently-launched ‘Cartographer’, a backpack equipped with SLAM technology.

We will see a great deal of development in this technology which has considerable potential and the possibility of a massive effect in how data is captured quickly and effectively inside a built environment.

Scanning technology is developing and expanding at a fantastic rate and is going ‘hand to hand’ with the rapid development in digital photogrammetry and image-based modelling. Plowman Craven has worked for a number of years in the entertainment industry providing 3D laser scanning and photogrammetry solutions for film and TV such as Game of Thrones, Life of Pi, Skyfall and very recently Marvel’s Guardians of the Galaxy.

In the surveying industry we have seen how both technologies moved forward together in a very short space of time, and became associated with mass market deliverables. Laser scanning and image based modelling does have a long way to go yet, but we are seeing a greater number of ingenious applications of the technology and many of them are indeed really cool!