As digital photogrammetric techniques advance at pace, the ability to use them as standalone technologies increases, writes Plowman Craven director Peter Folwell

While having a customary glass of wine in front of the TV one evening I managed to catch two very interesting documentaries — one about the 75th anniversary of the Battle of Britain and the other giving a plotted history of the Ordnance Survey. Each contained items about the important role aerial photogrammetry played in collecting accurate information for mapping; how the technology has changed! This is also very true for terrestrial photography — originally a source of accurate measurement producing photo plans and orthophotos for 2D representation and the use of stereo photogrammetry for the extraction of 3D line work.

The arrival and development of laser scanning technology initially relegated the use of photography as an accurate source of data. Now considerable technical advances in the use of digital photogrammetry has meant the two technologies are intrinsically linked and provide powerful 3D measurement and data collection solutions

Initially laser scanners collected only 3D data where each of the points had a recorded intensity value, represented by a range of colours dependant on the software or scanner type. To enhance interpretation and become more user friendly it was possible to create a workflow and process to use external cameras.

An early method adopted by Plowman Craven was, after collecting point cloud data, the scanner was replaced with a DSLR camera mounted on a Nodal Ninja capturing photographs covering 360 degrees. The photographs were stitched into a panorama and used for overlaying the scans with RGB information.

Most modern terrestrial scanners now have inbuilt cameras that can provide good quality RGB information for each scan location. Some collect High Dynamic Range imagery — such as the Leica P40 or imager5010C from Z+F, while others have single exposure technology.

What is produced is a large, high quality point cloud data set, RGB enhanced but needs specialist software and hardware to process, manipulate and view the data. Because of this, most laser scanning manufacturers provide a viewing and interactive capability of sharing scan data with other stakeholders without having the need for specialist software or high spec hardware. Leica TruView, Faro WebShare, LFM NetView are examples of viewers via web browsers as 360-degree photographically enhanced panoramic views.

Displaying point cloud data in this way enables a level of interaction and the ability to extract measurements. The visual quality of the data has the added advantage of providing a great source of asset and condition information for other applications and in particular the BIM process.

The integrated technology has moved forward dramatically over the last few years with many mobile mapping solutions now providing Lidar scanners with multi camera systems to capture calibrated imagery and point cloud data at the same time, while travelling at speed, and having the ability to produce the quality and accuracies demanded.

The ability to be able to view, accurately locate and access large spatial data sets has considerably improved the efficiency and productivity of GIS data collection.

As digital photogrammetric techniques advance at a pace the ability to use it as a standalone technology increases. We are already very familiar with 360° panorama’s and virtual walkthroughs now becoming an everyday occurrence. Systems such as the nctech iSTAR can produce rapid 360 degree imaging of the environment and batch stitch the images together in seconds. 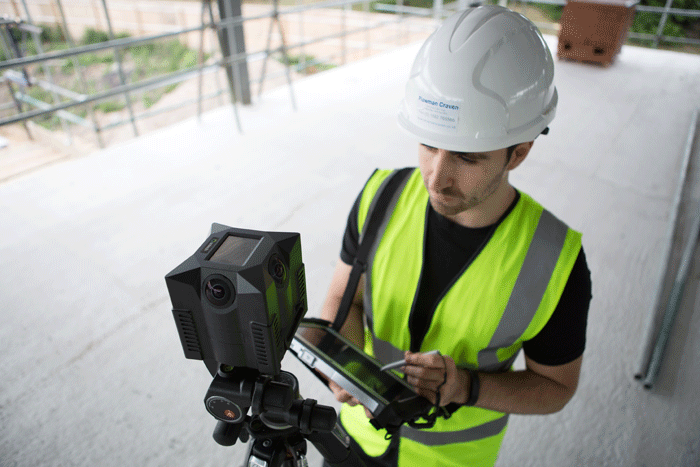 The use of gigapixel imagery is now enabling the user to visualise features in considerably greater detail than standard photography — a fantastic tool for heritage and asset recording. Image Based Modelling is becoming a viable alternative to laser scanning. It is definitely low cost, flexible and in many cases more portable. Packages like Pix4D, Agisoft, Bentley ContextCapture (see this article) allows point cloud generation from photographs. The software packages look for common or feature points extracted from the photographs and then results in the computation of the camera positions and point cloud constructed.

A popular and growing use of this technology is with Unmanned Aerial Vehicles mounted with cameras. UAVs are providing an economical alternative to other forms of aerial photogrammetry.

Reduced cost has made this technology commonplace in a wide range of sectors including agriculture, mining, military, surveillance and consumer recreation. We are seeing real benefits for site investigations, construction program assessments, condition surveys and surveying areas which were previously inaccessible.

Plowman Craven has been involved in the film and entertainment sector for a considerable number of years with experience mentioned before of working on the Game of Thrones, Skyfall and Marvel’s Guardians of the Galaxy. It is an industry that has fully embraced both laser scanning and digital photographic techniques. Multi camera systems enable the object/person to be scanned in one click eliminating any movement and then a model created, fully textured ready for the VFX team or 3D printers. This form of technology is now readily available to the general public through such apps as Autodesk 123D Catch which can turn ordinary photos from your mobile devices into 3D objects.

Image Based Modelling technology and its application is developing at a rapid pace and is becoming a viable option over laser scanning but both technologies have their strengths and limitations. The ability to combine them intrinsically, obtain similar data sets, apply them appropriately is where greatest value can be obtained.

Thank you to Marta Wren at Plowman Craven for assistance with this article. ■ plowmancraven.com

Running Revit in the cloud
A Q&A with Enscape
Rendering beyond the CAD workstation
How AI is impacting building simulations
The future of AEC: an executive perspective
Towards an open future: Keith Bentley interview
4D: in the driving seat
Sponsored content: The Future of Visualisation
Advertisement
Previous Post
Next Post