HP’s new ultra-portable laptop boasts a no-compromise quad core CPU but, for 3D CAD, the display needs to be carefully matched to the GPU. By Greg Corke

Dell re-wrote the mobile workstation rulebook when it launched the Precision M3800 in late 2013. With a powerful quad core CPU, capable professional GPU and a stylish, slimline 1.9kg chassis, the 15-inch CAD-class laptop was like nothing that had come before.

At the time, HP was selling the now-discontinued ZBook 14. This 14-inch mobile workstation was exceedingly portable, with superb battery life, but it was worlds apart from the M3800 when it came to performance. With a dual core low-voltage CPU and basic pro 3D graphics, this so-called workstation Ultrabook was only intended for very entry-level 3D CAD.

HP has been playing catch-up ever since and, in Spring 2015, looked like it had earmarked a gaming laptop derivative to be its M3800 killer. But the HP OMEN Pro mobile workstation turned out to be a stopgap solution, hastily brought to market to seal a large deal with a major engineering customer.

With a quad core CPU, mid-range GPU, NVMe PCI storage, security and docking station, this slimlime laptop not only has the performance but also the enterprise features that were lacking in the OMEN Pro.

The quad core CPU is not only good for CAD but also gives it good acceleration in multi-threaded applications such as ray trace rendering.

The machine gets its Ultrabook status by meeting a number of criteria set by Intel for ultra-portable laptops, the most prominent being thickness, fast storage (SSD) and good battery life. But this doesn’t mean compromises have been made by offering slower clock speed CPUs. In fact, the ZBook Studio features the exact same 45W quad core processors found in the HP ZBook 15 ‘desktop replacement’.

Considering how thin and light the ZBook Studio is, having this class of CPU is mightily impressive. Our test machine’s Intel Xeon E3-1505M v5 made light work of our number-crunching benchmarks. Indeed, in 3ds Max (ray trace rendering), it was less than 20% slower than the desktop Intel Xeon E3-1270 v5 (3.6GHz up to 4.0GHz) that powered the HP Z240 Tower we reviewed in January 2016.

With 32GB of Error Correcting Code (ECC) or non-ECC memory spread across two 16GB SODIMMs, the Studio has more than enough capacity for most CAD workflows. Non-ECC memory will be fine for most users, but ECC memory (which can only be matched with the new Xeon CPUs) could be useful to protect against crashes during long rendering runs.

The Studio also packs in a respectable GPU, in the form of the Nvidia Quadro M1000M. A step up from Nvidia’s true entry-level GPU, the Quadro M600M, this special edition graphics processor with 4GB of memory (instead of the usual 2GB) should offer plenty for most CAD users – at least when using HD resolution displays, that is. Unfortunately, the same isn’t always true at higher resolutions and we sometimes found the M1000M unable to keep up with the demands of our test machine’s 4K (3,840 x 2,160) panel.

With four times as many pixels as FHD (1,920 x 1,080), 4K displays can put a huge additional load on the GPU when rendering interactive 3D graphics. While the ZBook Studio still performed well at 4K in some applications, including Revit, it stuttered in SolidWorks 2015, going up to 50% slower than it did at HD resolution.

This 4K issue is not unique to the HP ZBook Studio – we experienced a similar slowdown last year with the Dell Precision M3800. However, as the display image on the Dell UltraSharp IGZO 4K panel still looked perfectly crisp at 1,920 x 1,080, we concluded that, to minimise the impact on 3D performance, we would be happy to swap between resolutions as and when workflows dictated.

With our HP ZBook Studio’s 4K IPS display, however, we would be less inclined to do this. The image wasn’t sharp in HD, much like you’d expect at any non-native resolution.

The good news is that the HP ZBook Studio can also be fitted with standard and touchenabled FHD panels and a 4K Dreamcolor panel that may or may not render perfectly at HD resolutions.

The Studio’s internal storage is all about performance, with HP standardising on one or two M.2 NVMe Solid State Drives (SSDs). While these Samsung SM951 SSDs (branded as the HP Z Turbo Drive) are great for moving big files around quickly, CAD users with massive datasets may be a little disappointed that there is no room for a 2.5-inch hard disk drive (HDD), as Dell offers in its Precision 5510.

Standardising on tiny M.2 form factor SSDs obviously helps keep down weight and size and while this isn’t a problem if your storage requirements are moderate, it does mean that price per GB is high and capacity is currently limited to 1TB (2 x 512GB drives).

Of course, when it comes to performance, the HP Z Turbo Drive wins hands down, with our single 512GB SSD contributing to an incredibly fast Windows 10 boot time of 13 secs and heavyweight CAD applications loading in under 10 secs.

The impressive 1,800MB/s read and 1,250MB/sec write speeds achieved in our AS-SSD benchmark will certainly benefit some workflows – think huge continuous datasets such as those used in point cloud processing, simulation and video editing – but you are less likely to see a benefit over SATA SSDs in standard CAD workflows.

With such powerful components packed into a slimline chassis, the HP ZBook Studio is a little prone to fan noise. In our tests, the machine seemed quite trigger-happy with its fans, which kicked in even when the machine was performing relatively moderate processing tasks.

The resulting noise isn’t too distracting, but if you enjoy working in silence, this is an important consideration.

The chassis itself is sleek and stylish – a far cry from the chunky mobile workstations of old. At only 18mm thick and weighing 2kg, it slides effortlessly into a laptop bag. The slender 150W AC power adapter adds little to the bulk.

It’s not all about the form though: the Studio’s lightweight magnesium chassis feels solid and well built, the backlit keyboard and glass trackpad comfortable to use. Dedicated mute and airplane mode buttons are a welcome inclusion, though it’s a shame there’s no numeric keypad. An optional fingerprint sensor and several built-in security features will be important for enterprises.

There are plenty of connectivity ports, using the very latest technologies. Two Thunderbolt 3 ports on the right perform multiple roles, supporting USB 3.1 Gen2 and PCIe Gen 3 devices, as well as external displays via DisplayPort 1.2 over the USB-C port connector.

Older devices are not forgotten and there are three standard USB 3.0 ports (one always-on), Gigabit Ethernet and HDMi.

With Thunderbolt 3 boasting highbandwidth data transfer speeds (5 GB/sec), there’s no need for a dedicated docking port. With a single cable, the Studio can be connected to the new HP ZBook Dock for charging and simultaneous linking of up to ten devices through ports that include Thunderbolt 3, four USB 3.0, RJ-45 (Ethernet), VGA, combo audio and two additional DisplayPorts.

The wireless options are pretty standard with dual band 802.11 ac/a/b/g/n (2×2) WiFi and Bluetooth 4.0. Previous generation ZBooks scored highly when it came to serviceability, thanks to an ‘HP Easy Access door’ on the underside of the machine. This impressive feature gave you ready access to key internal components, simply by removing a security screw and sliding off the door.

With its new generation ZBooks, HP has done away with the ‘door’ and all of its G3 machines require a Torx screwdriver to get inside. Apparently, this was done to reduce the thickness of the machines, which is a shame, but an understandable compromise. While there’ll always be customers who like to tinker, the majority probably prefer a more slender machine. And you can still get access to memory, storage and fans (for cleaning) simply by removing two panels and a total of 11 Torx screws. 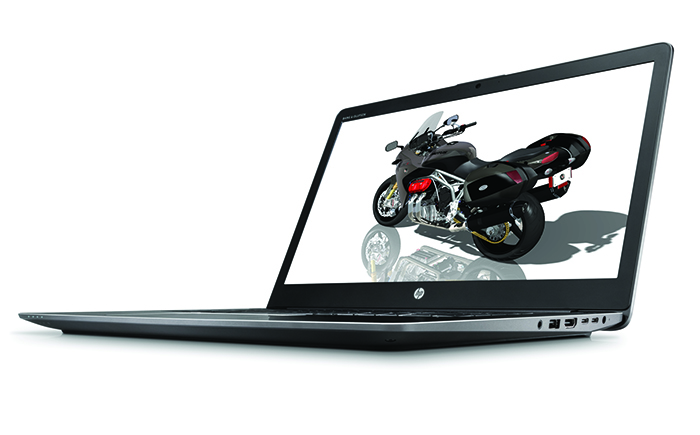 With the ZBook Studio, HP has produced an impressive mobile workstation that marries the performance and enterprise features of a modern CAD-class laptop with the portability of an Ultrabook.

The machine is incredibly advanced throughout, with many new technologies, but don’t be seduced by the beautiful 4K panel if it impacts performance in graphics- hungry 3D applications.

Overall, The ZBook Studio is an exceptional ultra-portable laptop for entry-level to mid-range CAD, with power in reserve for multi-threaded rendering apps. Slimline mobile workstations used to be about compromises, but while some may find the GPU underpowered, there’s little to separate the Studio from the larger HP ZBook 15. But with prices starting at £1,310 and our test machine coming in around £2,100, the HP ZBook Studio doesn’t come cheap.