The handheld BLK2GO can scan up to 420,000 points per second

The laser scanning market tends to move glacially. It’s an old and mature technology, and revolution is not in its nature. Therehave been some glimpses of excitement over the years — when Faro brought out a £20k scanner that could fit in an aeroplane carry on, or when the major CAD software developers built point cloud engines into their core BIM tools, but critical mass has never been achieved.

Then in 2016 Leica did something atypical – it brought out the ridiculously gorgeous £15k BLK360. The compact laser scanner was ideal for scanning interiors and the device was tied into the equally innovative Autodesk Recap on an iPad, but just as we thought this might be a real catalyst for change, no other firms joined in at that price point. Laser scanning continued to stubbornly stay out of the reach of the masses, compounded by the fact that Leica couldn’t make enough of the BLK360 to satisfy the demand. Now Leica has a new product and its styling looks like it’s from the future. Could this be the product that finally democratises point cloud capture?

The first thing that has to be said is that Leica must be employing an incredibly talented industrial design team. Both the BLK360 and the new BLK2GO are the most beautiful looking scanning devices that have ever been made. Even if you didn’t know what the BLK2GO did, you’d still want one and would want to hold it and show it to your friends like it was a Fabergé egg.

The BLK360 is a static laser scanning device for rapid point cloud capture over short distances. In contrast, the new BLK2GO is highly portable and adapts SLAM (Simultaneous Localisation And Mapping) technology, which was originally developed for robots and autonomous vehicles.

There is a price for this liberating scanning technology over a standard tripodmounted laser scanner and that’s accuracy. SLAM point clouds are typically accurate to around 20mm, which is still incredible when you consider a site that would take a day to capture through traditional methods, might be done ten times faster with a SLAM device. However, this limitation means there will be times when the BLK2GO isn’t appropriate compared to traditional surveying.

Leica’s BLK2GO has been designed to be as simple to use as possible. Featuring one button operation, it wirelessly links with a Leica iPhone app, so the operator can see in real-time the data it gathers in both 2D and 3D.

The device features enough internal storage for 24 hours of scanning (compressed), 6 hours uncompressed and has an exchangeable battery which lasts for approximately 50 minutes. The range, however, is not huge — from 0.5m to 25m — but this is a SLAM device so your feet can do the work. It combines a 420,000 pts per second laser scanner with a 12-megapixel camera, together with an additional 3 camera panoramic vision system.

Leica states that the BLK2GO can go down to 6-15mm accuracy and to achieve the highest accuracy, its case can be turned into a base for static scans. While the iPhone app is a useful tool for onsite feedback, the BLK version of Leica Cyclone is recommended for importation and scan clean up.

Everything from the design of the device, to the ease of one button operation and the speed make the BLK2GO a highly desirable surveying and data capture tool. The nature of the scanned data makes SLAM scans look a bit different to traditional point clouds, with more visible banding in the variance of point cloud density, but this does not impact the quality of the data captured.

So what’s the downside? Well, while this technology is something that everyone in the industry would absolutely love to have, it does cost around £40k a pop. For a surveying firm, this is a no brainer — it has the potential to deliver a huge productivity benefit. However, as far as liberating and democratising point cloud capture within the industry, I am afraid this beautiful device is not going to be the one to make that happen.

The BLK2GO is very much aimed at the traditional surveying firms or, as Leica told us, Hollywood, as a number of films have used the device to capture sets and scenes between takes. It will certainly lead to quicker, less obtrusive, more frequent scans and might bring the cost of data capture services down.

Somerset House in London – captured with the BLK2GO, viewed in Cyclone Register 360

At CES, Leica unveiled its first foray into the cloud, a browser-based service called HxDR which will be a platform for uploading, registering and accessing customer project point clouds or even city scale models for digital twins.

With the introduction of technologies such as the BLK2GO, the idea is that this data can be uploaded to the cloud from site for post processing and giving teams access to the captured data.

As it stands, the system is very much in development and will not compete with authoring tools like Cyclone, which would still be used to do a lot of the grunt work in filtering and processing the data for uploading.

In some ways, HxDR could be seen as the ‘Unreal’ or ‘Unity’ for point clouds – the ultimate aim being the automatic registration and production of an accurate, detailed and textured model with minimal user interaction, enabling rapid scan-to-model, especially from BLK products. This could be created from data derived from many scans and types of devices to create what Leica calls a ‘supermesh’. As an example of capability, Leica currently has the whole of Paris scanned, textured and in the system at high resolution.

HxDR will be a subscription-based service, allocating a defined level of cloud disk space and a number of seats. Users can upload project work and use the service to share them. There will be many other possibilities as the platform and API develops. A company could use the technology to sell access to city models it has created, or there could be layers for AI post processing or the ultimate goal of having real Scan to BIM capabilities, which Leica is keenly looking at.

As part of the Hexagon group of companies, there are a number of initiatives to address Scan-to-BIM, including one based on AI that was announced between Leica and BricsCAD last October. When this eventually arrives, it will be a game changer. 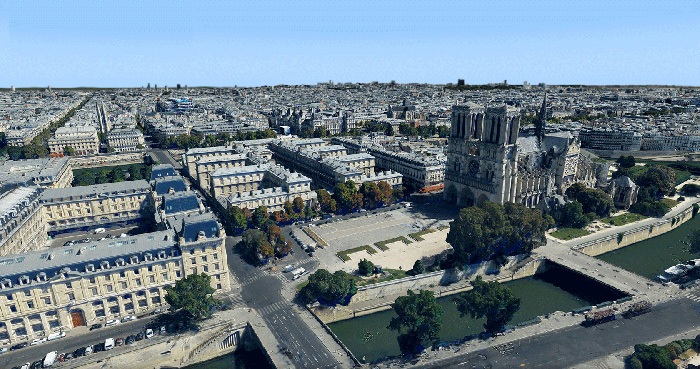 Leica currently has the whole of Paris scanned, textured at high resolution in its HxDR cloud platform

As a company, Leica is certainly shaking off its image of perhaps being the least reactive of the scanning companies. It is trialling price points and delivering technologies and designs that are leading the industry, while aggressively looking at addressing rapid scan to textured mesh. BLK2GO and HxDR are two essential components in that plan but they also work happily in traditional desktop workflows. I’m fascinated to see what the company does next.

The Leica BLK360 is still the closest scanner at what we would deem to be a point cloud liberation price point, and that product is so popular that Leica can’t make enough of them to meet demand. Even the BLK360s that get refurbished all get snapped up.

This should be a sign to someone out there that there is a volume need for data capture. It might well be that the scanning revolution will really start from the consumer end of the spectrum, as our phones and tablet computers start to have LiDAR capability built in.

With every generation of phone, we know the quality and capabilities will evolve and rapid innovations in autonomous vehicles, robots and consumer AR are driving the development of low-cost LiDAR technology solutions.

It’s all starting to look like it’s within reach for all, but it might be trailblazed by games and consumer technology.