As one of the largest networks of construction companies in the Netherlands, TBI certainly has the power to reach its key objective – to make a better world for people and for the environment. And it’s leading by example. With the Triodos Bank in Driebergen, The Netherlands, for instance, it built one of the most sustainable bank buildings in the world. With a green roof, solar panels, and natural provision of light, air and water, the building is completely energy neutral. And at the end of its life, its unique wooden construction means it can be easily disassembled, and the parts and materials reused.

TBI innovates in many other areas and is widely recognized as an IT pioneer. As Frank Wolbertus, BIM solution specialist at TBI SSC-ICT explains, the company’s eager embrace of Building Information Modeling (BIM) has helped further its capabilities and leadership in the world of construction. Using an optimized BIM process on the Western Scheldt Tunnel project, the longest highway tunnel in The Netherlands, TBI not only delivered the project within budget, but completed it three months ahead of schedule.

TBI is continually looking for new technologies to drive the company forward, so when Microsoft Azure released its latest GPU-accelerated NVv4 family of virtual workstation instances, TBI took notice. It realized this new AMD GPU+CPU platform was a great way to extend its strategic investment in Azure with a virtual desktop solution that offers both impressive performance and affordability, making it ideal for CAD, BIM and other demanding 3D applications.

Forever breaking new ground, TBI is not new to the idea of virtual desktops. It invested in its first on-premise Virtual Desktop Infrastructure (VDI) solution way back in 2010, but the cloud offers something different, as Wolbertus explains, “Our on-premise VDI solution was out of date, whereas the Azure Cloud is completely new. What’s more, we only have to do the imaging part and not the infrastructure, and don’t have to invest in hardware and GPUs – we only pay as we use it.”

Partners you can rely on

TBI’s engineers use a wide variety of CAD and BIM tools, including Autodesk® AutoCAD®, Revit®, Navisworks® and BIM 360®, as well as Solibri®, Bluebeam®, Bentley Systems®, Unity Reflect®, and Enscape©.

To help transition its core 3D applications to a virtual environment, it was essential to have the right partners in place, so TBI enlisted the help of external advisors from Autodesk Consulting and Thomas Poppelgaard. TBI is a Microsoft house, so it was a natural choice to go with Microsoft Azure. The company is also a long time user of Citrix who has a long-standing collaborative relationship with Microsoft, which meant that TBI could deploy Microsoft Azure resources seamlessly with its existing Citrix Cloud Services.

Both companies have a good track record and great support, plus a guarantee of great performance, stability and support for Hybrid Cloud.

The decision to go with the AMD CPU and GPU-accelerated Azure NVv4 instances was, as Wolbertus explains, for “a typical Dutch reason”.

“It was cheaper, and it performed the same as before,” he says, adding that TBI currently uses the Standard_NV8as_v4 instance in Azure for its BIM workloads. This is made possible by AMD’s innovative SR-IOV-based, GPU partitioning technology and Microsoft’s GPU-P technology, which allows the GPU resource to be split into different increments along with the CPU cores, memory and storage. The Standard_NV8as_v4 instance uses ¼ of a GPU resource and is priced accordingly, helping to better match the resource needs for the intended workload.

Moving to a cloud-based virtual desktop solution has delivered several benefits for TBI, as Wolbertus explains, “All machines are running on the same versions, all CAD is the same build,” he says, adding that instead of having to update 200 individual machines, VDI means only one machine needs updating as a golden image.

We also have more graphical performance in VDI than local workstations/laptops. And it’s easier to keep up with technology in the cloud,” he adds.

Data security was another influencing factor in TBI’s decision to invest in a centralized workstation solution, as Wolbertus explains. “In the past we had a laptop that was stolen with high security documents, and with this new solution there are no documents stored on the laptops the users are provided with, as they connect to the TBI Cloud workspace.”

The move to virtual desktops has also delivered major benefits to the construction site, specifically in the way engineers and site managers access plans and designs, as Wolbertus explains, “TBI engineers went from large notebooks to small notebooks and iPads for access, so they don’t have big workstations anymore. And because everything is stored in the cloud, and delivered via Citrix, they have the latest information, including models, drawings and documents.”

The impact of COVID-19

Like most AEC firms, TBI has felt an impact from COVID-19. Prior to the pandemic, most of TBI’s engineering staff worked in the office. However, the company’s flexible IT infrastructure helped smooth the transition to working from home. If required, engineers were allowed to take their laptop and dual monitor setup with them, then simply connect to the Azure Virtual Machines (VMs) as usual.

On one recent project – the renovation of the famous Binnenhof complex in The Hague, The Netherlands – the cloud proved critical through its ability to connect teams and other stakeholders in a completely virtual environment.

LiDAR scans of the prestigious historical government buildings were hosted in the TBI Cloud workspace where they could be accessed using Azure NVv4 and Citrix Cloud. A ‘live’ meeting between client and contractors meant all preparations and coordination could be handled completely digitally via video conferencing, allowing the project to move forward. 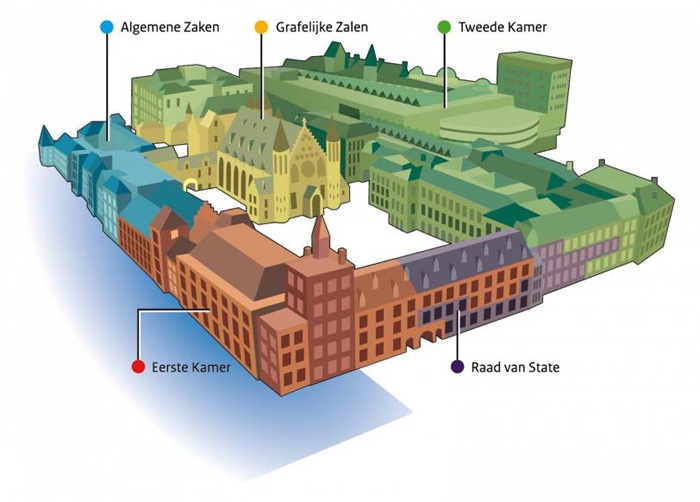 Always on the front foot, TBI is already looking to the future. According to Wolbertus, there are plans to expand access to Microsoft Azure and to also get more out of its project data. By tapping into the vast amounts of data it generates, it hopes to get better insight to help improve projects of the future. TBI continues to learn from the past to keep it one step ahead of the competition.

TBI is an agile network of companies that renews, caters for, and maintains a physical environment of homes, offices, schools, hospitals, roads, tunnels, bridges, locks, factories, and ship installations. With a mission to “make the future,” TBI aims to improve the quality of life, work, and mobility for people by developing and realizing smart, sustainable, and future-proof solutions. TBI companies have expertise in the fields of engineering, construction, and infrastructure and are recognized as IT innovators across a range of industries, providing leadership and advice at a national level in their native Netherlands. To learn more about TBI click here.