Lenovo is late to the game with its premium, ultra-thin 15-inch mobile workstation, but it has been worth the wait, since the ThinkPad P1 delivers an impressive blend of portability and performance for users of 3D CAD and BIM software.

For years Lenovo had a big gap in its mobile workstation portfolio. The closest thing it had to a premium, ultra-portable 15.6-inch laptop for 3D CAD and BIM was the ThinkPad P52s. But while this 1.95kg, 20mm-thick machine offered incredible battery life, it simply couldn’t compete with the Dell Precision 5530 or HP ZBook Studio G5 when it came to performance, portability and stylish good looks.

Last year, Lenovo finally filled this gap with the ThinkPad P1. The slimline machine boasts specifications that are close to those of a mainstream 15.6-inch mobile workstation, but the sleek design is only 18.7mm thick and 1.8kg with a 4K display.

The P1 may be thin and light but like all ThinkPads it is built for endurance. The main body is made from magnesium alloy and the lid is carbon fibre. It has been designed to withstand (and is Mil-Spec tested for) cold, heat, vibration, shock, dust and other hazards. The laptop has a really solid feel to it: the hinge is firm and the display has very little flex. One gets the feeling it could be picked up by the corner of the screen, though we weren’t brave enough to try.

For a premium look and feel, the ThinkPad P1 has a clean, minimal design and a soft touch matt black finish. It’s a slightly darker shade than standard ThinkPads and looks and feels great but is a tiny bit prone to marks from greasy fingerprints.

The keyboard is seamless, so it blends in with the palm rest, but there’s no numeric keypad. This is because there simply isn’t room; at 361.8mm, the P1 is not as wide as Lenovo’s mainstream 15.6-inch mobile workstation, the P52.

The keyboard itself is really solid and the frame has very little give. There’s just about the right amount of travel on the keys and typing is a pleasure. Equally, the glass touchpad has the perfect amount of resistance with full multitouch support. There’s also the classic Trackpoint, for those who prefer their input devices to be old school, along with three physical mouse buttons. To the right of the keyboard, there’s a fingerprint reader that uses touch rather than swipe for easier authentication.

For more advanced security, the front-facing Infrared camera supports Windows Hello technology, so you can use your face for authentication or logging in. In addition, the bundled Mirametrix Glance software can automatically lock the machine when you look away for a set time, then unlock upon your return. Often these types of features come across as gimmicks, but this seems truly useful. 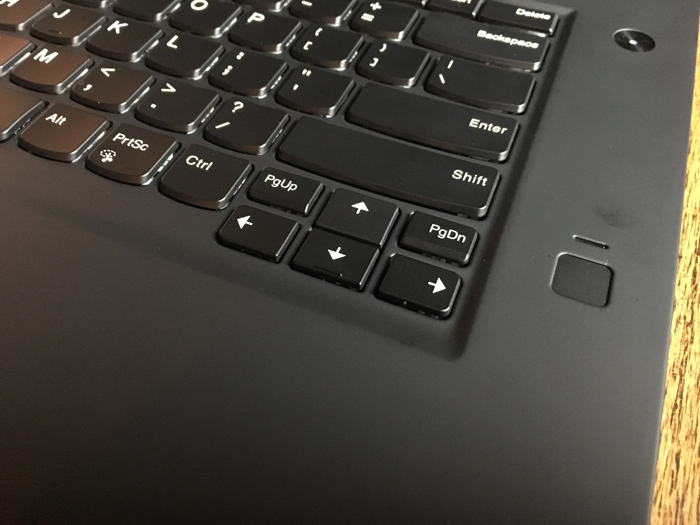 The keyboard is seamless, so it blends in with the palm rest. The fingerprint reader to the right uses touch rather than swipe for easier authentication

The Infrared camera is only available with the optional 4K (3,840 x 2,160) display and not the standard FHD (1,920 x 1,080) display, which costs £149 less. In addition to the obvious benefits of a 4K display – crisper CAD geometry, higher fidelity images and huge spreadsheets – the 4K panel is brighter (400nits vs 300nits), is multi touch enabled, boasts 100% Adobe colour gamut and a 10-bit colour depth. It’s a beautiful display with a slight glossy finish. However, as with all 4K displays, it could have an impact on 3D performance with frame rates slower than they would be with the FHD panel. After all, there are four times as many pixels to render (see later).

In terms of ports, the machine is very well-equipped. On the right, you’ll find two USB 3.1 Gen 1 (Type-A), along with smart card slot and SD card reader. On the left, there are two Thunderbolt 3 (Type-C), an HDMI 2.0, a 3.5mm Mic/headphone combo jack, as well as a dedicated Mini Gigabit Ethernet (the machine comes with an RJ45 adapter). To boost display connectivity, there are optional USB-C to DisplayPort and HDMi to VGA adapters.

The P1 has a brand new 135W power supply, which is remarkably small (35% smaller than its predecessor). It weighs less than 500g (including a UK plug) and features a neat ‘dog ear’ design so the lead can be wrapped around neatly.

The 4 cell Li-Polymer 80Wh battery features Rapid Charge Technology, which Lenovo says gives you 80% of battery life in 30 mins and 40% in 15 mins after plugging in. This is great for a quick top up at a café or an airport.

The battery lasted a reasonable 125 mins in the demanding PCMark (OpenCL) media test, which continually hammers both CPU and GPU. In a more typical day-to-day workflow, with a combination of 3D CAD and office apps, we’d expect it to go for considerably longer.

Thin and light used to mean a trade-off in performance but, as with the HP ZBook Studio G5 and Dell Precision 5530, the ThinkPad P1 is up there with most standard 15.6-inch mobile workstations.

Our test machine’s “Coffee Lake” Intel Xeon E-2176M CPU (2.7GHz, 4.4GHz Turbo) has six cores, a significant step up from the quad-core “Kaby Lake” CPUs of 2017. It means a substantial performance boost in multi-threaded operations such as ray trace rendering.

Of course, for mobile workstations there are always big challenges when it comes to thermal management. On paper, the Xeon E-2176M sustains an impressive 4.4GHz in single-threaded operations, such as CAD, but the frequency can go down as low as 2.7GHz when all six cores are being used flat out.

On test, the P1’s dual fan cooling system did a great job of keeping clock speeds relatively high. For burst renders of a few minutes, it hovered around 3.1GHz to 3.2GHz. Even when we rendered a huge scene for over an hour, it managed to maintain an all-core speed of 3.0GHz – and without the fans getting too noisy. Impressive stuff.

To put this in perspective, in our V-Ray and KeyShot rendering benchmarks, it was almost twice as fast as the Lenovo ThinkPad P52s mobile workstation with a quad core Intel Core i7-8650U CPU (1.9GHz, 4.2GHz Turbo). It even managed to beat a desktop workstation, the Dell Precision 5820 which we reviewed last year and had a quad core Intel Xeon W-2125 (4.0GHz, 4.5GHz Turbo).

The ThinkPad P1 is also well-specified when it comes to graphics, featuring the Nvidia Quadro P2000 with Max-Q GPU design, a slightly lower-powered implementation of the Quadro P2000.

We tested primarily in SolidWorks 2019 and found the P1 could handle large assemblies as well as most other workstations, desktop and mobile. We’d expect to have a similar experience with other CAD and BIM tools.

With the ‘beta’ OpenGL graphics engine, which helps remove the CPU bottleneck experienced in most CAD and BIM tools, we saw frame rates in our largest assembly, rise from a stuttering 4.51 to a smooth 23.47. In comparison, the Dell Precision 5530 2-in-1 with its Radeon Pro WX Vega M GL graphics went from 3.91 to 15.75.

In our game engine viz and Autodesk VRED tests, the Quadro P2000 Max-Q GPU struggled a bit because of the 4K display. Frame rates dropped as low as 5 frames per second (FPS), whereas 20+ FPS is really ideal. Dialling down the resolution to 1,920 x 1,080 (FHD) brought frame rates up to a much more acceptable level, more than double in most cases. In SolidWorks shaded with edges mode however, where graphics performance is more influenced by CPU frequency, so places less emphasis on the GPU, frame rates remained largely the same. With the ‘beta’ graphics engine, they went up 30% with our medium sized desktop PC model and 43% with our large production machinery assembly.

Hopefully, this should give some food for thought when choosing between the FHD and 4K panel. Of course, one could always go for the 4K panel regardless and reduce the resolution as and when workflows dictate. However, this is only really practical in full-screen applications like game engine viz, since toolbars and icons are not super sharp when not viewed at the native 4K resolution.

In terms of storage, the ThinkPad P1 can host one or two M.2 NVMe SSDs, up to a maximum of 4TB. Our test machine came with a pair of 1TB SSDs, configured as a 2TB striped (RAID 0) array. This combination delivers incredible read/write performance but is a risky path to take as, should either drive fail, all your data will be lost. For CAD or BIM, RAID 0 is certainly overkill and this setup should only be considered if you have a workflow that would really benefit from it – for example, simulation, point cloud processing or video editing.

By standardising on solid state storage, the P1 doesn’t give the option of a 2.5-inch hard disk drive (HDD), which can significantly bring down the overall price per GB. Indeed, the pair of 1TB SSDs in our test machine cost a whopping £817 Ex VAT.

With two DIMM slots, the maximum memory of the ThinkPad P1 is 64GB. This should be plenty for most CAD users, who are more likely to go with the 32GB (2 x 16GB DDR4 2666MHz SODIMMs) that came with our test machine.

Servicing is fairly straightforward if you want to replace or add an M.2 SSD or memory. Simply remove seven small Philips screws on the back and a panel slides off easily. You’ll also have access to the battery, though this is fiddly to replace. 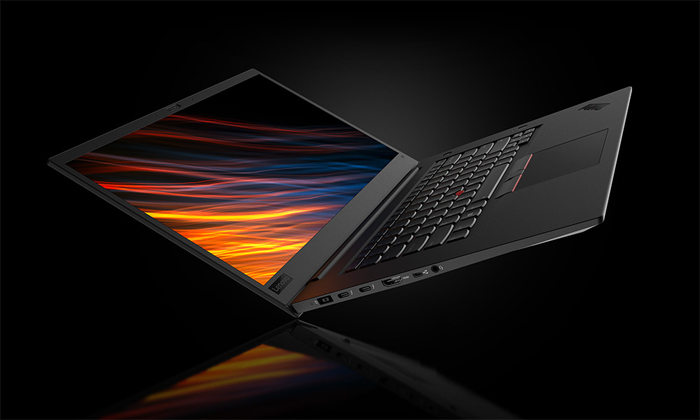 Lenovo may be late to the game with its ThinkPad P1 but it has certainly been worth the wait. It’s an impressive mobile workstation with great build quality that strikes a very good balance between performance, portability and thermal management. Some of the earliest ultra-portables were prone to fan noise and throttling, but the P1 excels at maintaining performance and good acoustics: it’s virtually silent when idle and not too loud even under heavy loads.

Most impressively, even though it is thinner and lighter than a mainstream “Kaby Lake” 15.6-inch mobile workstation from 2017, it is significant step up in terms of performance, not least when it comes to rendering. The 4K panel is beautiful but be wary of its potential impact on 3D performance.

Of course, there are some downsides: battery life could be better and the lack of a 2.5-inch drive means storage can become expensive if you need terrabytes rather than gigabytes. Then, of course, there’s the price. At £3,107 Ex VAT, our test machine represents a serious investment, but swapping out the pair of 1TB SSDs for a single 256GB SSD will bring this down to a much more palatable £2,403 Ex VAT.

Overall, the ThinkPad P1 is an excellent choice for designers, engineers and architects that rely on BIM software plus a little bit of real-time and ray traced design viz and one we’d wholly recommend.