Eighteen months ago, AMD changed the face of the Small Form Factor (SFF) workstation. The launch of the FirePro W4300 professional graphics card in late 2015 gave these compact desktop machines the kind of 3D performance that was previously only available in standard desktop towers.

Now AMD has raised the bar again with an even more powerful GPU, designed specifically for SFF workstations. The Radeon Pro WX 4100’s low-profile form factor makes it compatible with workstations like the Dell Precision 3420 and the HP Z240 SFF.

With a smaller end plate than a full-height graphics card, the GPU features four Mini DisplayPort outputs, which are capable of driving four 4K displays. If your current GPU uses standard DisplayPort, you will need to make sure you have the appropriate cables or adapters.

The Radeon Pro WX 4100 is built on AMD’s Polaris architecture which features a 14nm process technology that helps reduce power consumption. It is rated at a reserved 50W and features 4GB of GDDR5 memory, which is more than enough for most 3D CAD-centric workflows.

For this review, we tested the Radeon Pro WX 4100 inside a standard tower workstation (Scan 3XS Ultimate 2D Plus, as reviewed here) and not a SFF workstation. The primary reason for this was so we could see how it performed alongside higher-end GPUs like the AMD Radeon Pro WX 5100 and Nvidia Quadro P2000.

Finally, we had also hoped to test Nvidia’s new low-profile GPU, the Quadro P1000. However, our sample did not arrive in time. 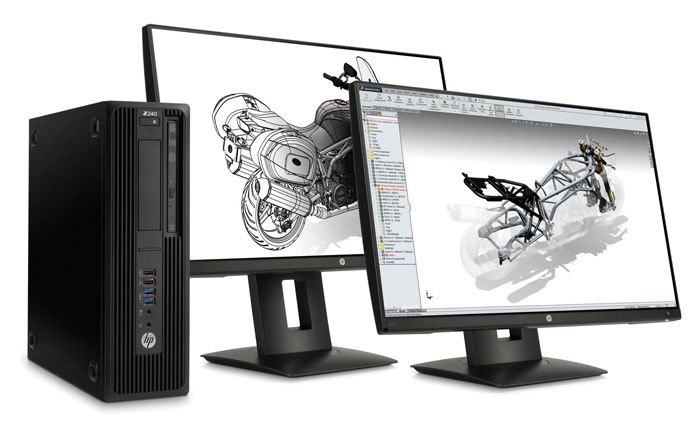 When viewing models in shaded with » AMD’s new low profile GPU cements the role of the Small Form Factor (SFF) workstation as a workhorse 3D CAD machine, writes Greg Corke HARDWARE REVIEW we got made it a little hard to position our large test model quickly and accurately but, in this highly CPU limited application, no amount of graphics processing would overcome this. We also tested the Radeon Pro WX 4100 at 4K resolution (3,840 x 2,160) using an HP Z24s display. In SolidWorks shaded with edges mode performance fell by 58%. However, this didn’t really become an issue until we turned on RealView and Ambient Occlusion. Then, some of our test models became a little sluggish. The SPECapc for SolidWorks 2015 benchmark reported a 143% drop in performance.

Benchmarks tell an important story, but mean nothing without context. In general, we found the Radeon Pro WX 4100 to handle pretty much anything we threw at it in SolidWorks at FHD resolution. All our test models could be manipulated smoothly, even when viewed with realistic materials and shadows.

In Revit, the 13 Frames Per Second (FPS) and 38 FPS. But it wasn’t really up to the job at 4K resolution as performance dropped to between 6 and 10 FPS respectively.

We also tested the Radeon Pro WX 4100 with a beta release of AMD’s GPU renderer, Radeon ProRender for SolidWorks. While it delivered our 1,280 x 1,024 resolution test render in a respectable 358 seconds, if you take your GPU rendering seriously using applications like V-Ray RT we recommend you invest in a more poweful GPU like the Radeon Pro WX 7100 or Quadro P4000 — or multiple thereof. 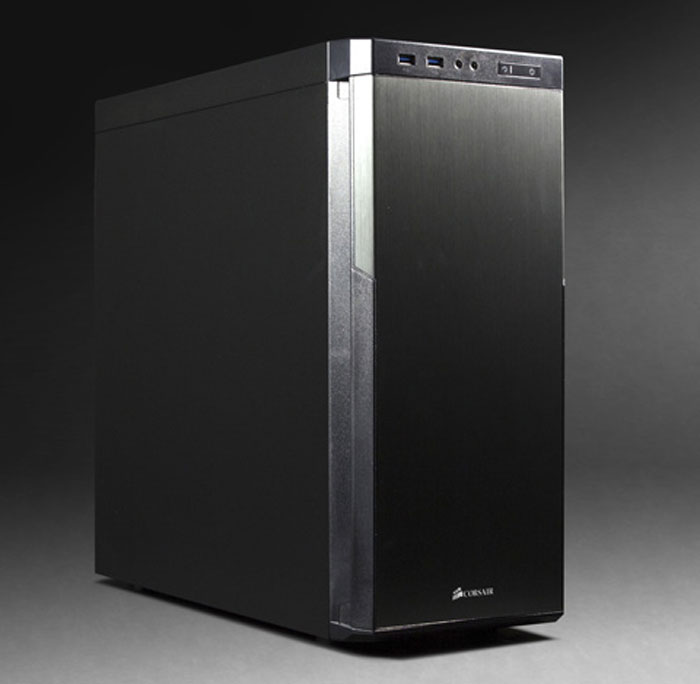 Considering that the Radeon Pro WX 4100 costs just over £250 Ex VAT, it looks to be an excellent choice for mainstream 3D CAD. The fact that it can deliver the kind of performance it does in a SFF workstation is a huge bonus. SFF workstations used to be about 2D and entry-level 3D CAD. Now, they can satisfy more demanding 3D CAD users, giving fewer reasons to invest in a tower workstation that takes up valuable desk space.

We look forward to seeing see how Nvidia’s new low profile Quadro P1000 GPU (£348 + VAT) compares and what it brings to the growing SFF workstation market. On paper it looks to be a big improvement over the Quadro K1200 it replaces. 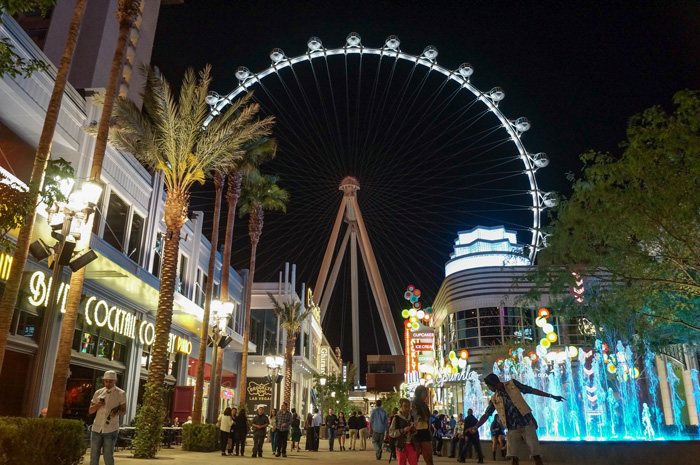 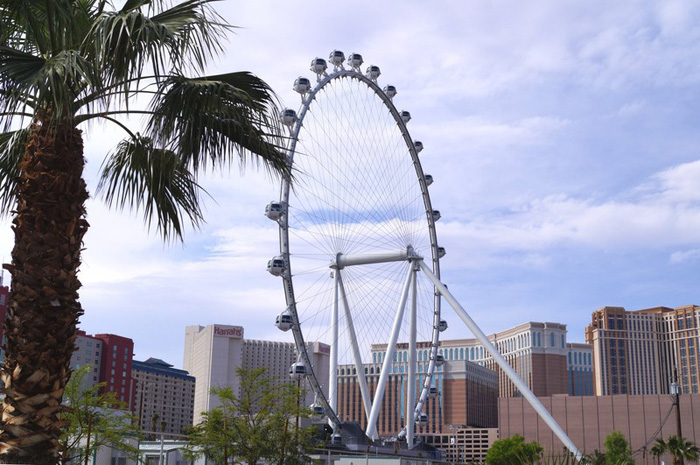 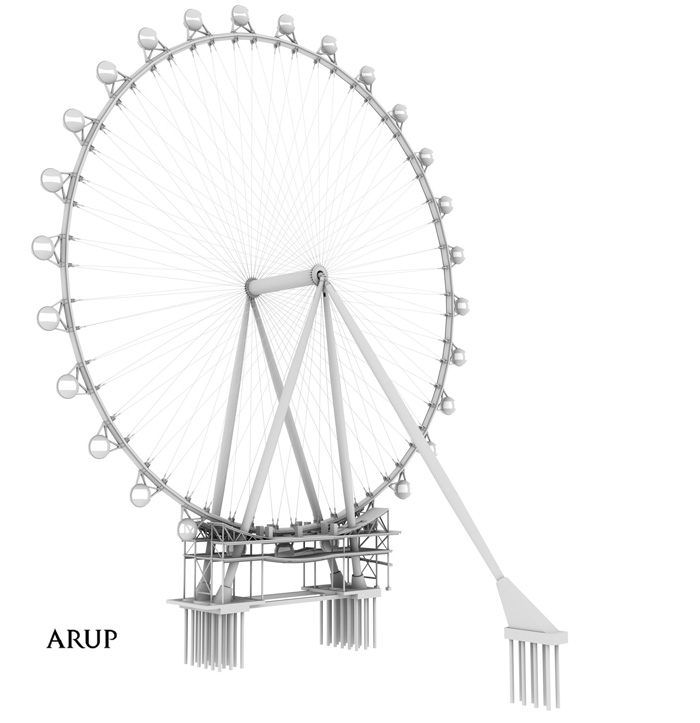 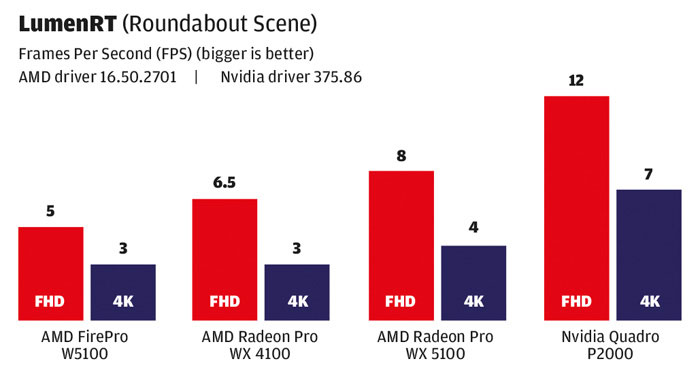 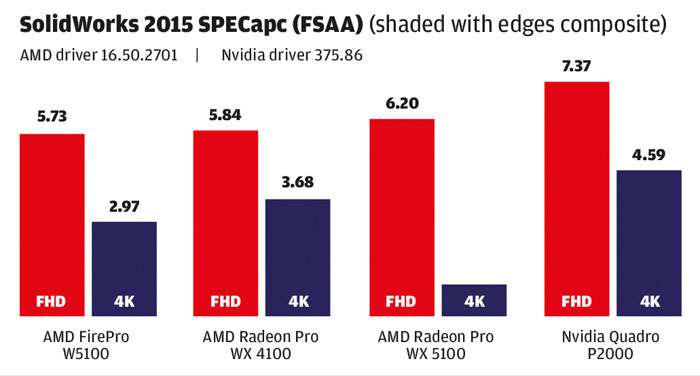 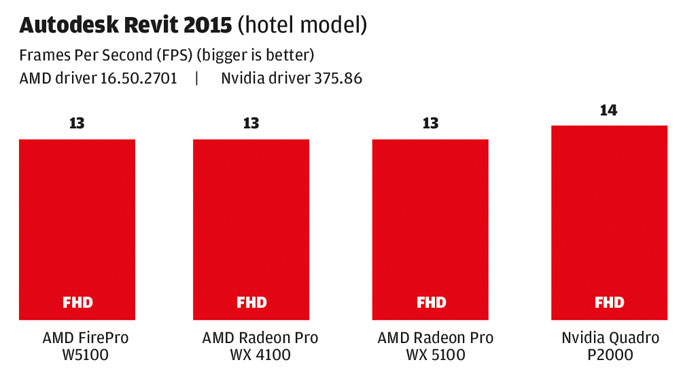