A budget workstation used to mean a huge hit in performance, but Greg Corke discovered your money can go a long way when you’re looking for a machine for under a grand.

CAD 2 has packed an incredible amount of technology inside its sub ú1,000 workstation – so much that we had to double check the price. It?s the only machine on test this month to offer a Quad Core processor and it does this without scrimping on clock speed either. The 2.4GHz delivered by its Intel Core 2 Quad Q6600 provides plenty of power to run single threaded applications, but you also get the an additional cores to play with as you will.

Four cores will be music to the ears of rendering users with multithreaded tasks to solve. It breezed through the 3ds Max rendering test we threw at it and concurrent CPU intensive tasks were dealt with little drop in individual application performance.

The graphics is provided by a Quadro FX1500, Nvidia?s excellent mid-range card. Mid-range CAD users are in safe hands here, and even those dabbling in design visualisation should enjoy good 3D performance.

The 4GB of RAM inside the system gives you a built in upgrade path to 64-bit Operating Systems, which is a more than viable option for a machine of this specification. For those who are already bottlenecked by memory in their 32-bit OS, however, Windows XP Professional x64 Edition and Vista are also available, though check compatibility with your applications first.

In terms of storage, CAD 2 has opted for speed, rather than redundancy, with two 160GB Seagate 7200.10 S-ATA drives configured as a single drive through Raid 0. This will give you near on 320GB in total, with the data shared across both hard drives, but should one hard drive fail you?ll lose all of your data, so regular backing up is essential with this configuration.

We found the machine to be very quiet in operation, even when hammering all four cores for an extended period. Removing the side of the compact solid chassis reveals the reason for this – one big CPU fan pushing all the air through to an adjacent fan at the back of the case. This seems to be the standard setup adopted my most workstation manufacturers today in order to reduce noise and it works very well indeed. Elsewhere inside the machine, there is excellent attention to detail with all cables carefully routed around the case.

If there?s a downside at all it?s that the hard drives are hard to get should they ever need replacing, and there aren?t any memory slots free on the Intel motherboard – though you wouldn?t really expect this in an entry-level machine and 2GB memory modules would push the price up considerably.

But this begs the question ¤is the CAD 2 Imagine Q64 really an entry-level machine?Ë If you told us a year ago that you?d be able to buy a four CPU workstation with mid-range professional graphics, 4GB RAM and a high performance disk system for under a grand, we simply wouldn?t have believed you. The fact that you can today still beggars belief, and with CAD 2?s Imagine Q64, you?ll not only be buying a machine that can satisfy your mid-range CAD requirements today, but well into the future as your needs (and the needs of your software) grow.

Before we get into the ?meat? of this review, we?d like to assure you that the following 400 words or so on Dell?s latest Precision workstation are free of typos (well certainly as far as the price is concerned). Yes, you can buy yourself a fully certified CAD workstation with professional 3D graphics for under ú500, and in case you were wondering it?s actually quite good. 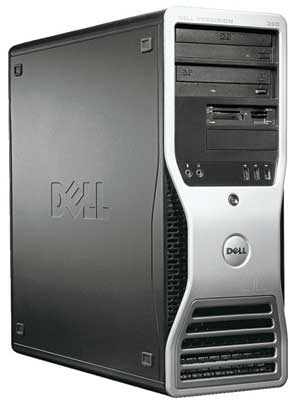 In order to deliver a workstation at this previously unheard of price, Dell has scrimped and saved in two main areas, the CPU and graphics. What remains though is still a very capable machine and the Intel Core 2 Duo E6420 CPU boasts two CPU cores run at a respectable 2.13GHz, which is more than enough to run most CAD applications. The same is true of graphics, and users with small to medium CAD models will have no problems with ATI?s 128MB FireGL V3400 card. Frustrations are likely to grow as frame rates slow on larger models, but for many CAD tasks you simply don?t need more power.

Elsewhere, the 390 performed surprisingly well in OpenGL mode inside 3ds Max, and this largely down to ATI?s custom Max driver. Graphics performance could be boosted further by upgrading to a higher performance card. An additional ú149 for a 256MB FireGL V7200 could be money well spent, but upgrading to a 1GB FireGL V7350 for ú799 would leave you with an unbalanced system. Your money would be much better spent upgrading the CPU and indeed the memory. This stands at 2GB DDR2 ECC, which for a system of this specification is just about right. There are two memory slots spare should you wish to make an upgrade to 4GB and beyond, but it?s unlikely that you?d want to move to a 64-bit Operating System anyway as there wouldn?t be enough power inside the system to support such large models effectively.

At 80GB, the S-ATA hard drive is conservative in its size, but should still be adequate if you?re working in networked design environment. If storage capacity is critical you can always upgrade to a 160GB S-ATA drive. You could also add a second hard drive at a later date and with easy access to the two drive bays inside the chassis this is an absolute doddle.

With this Precision 390, Dell is re-defining the budget workstation. And at ú499 it offers a truly compelling argument for mid-range CAD users to buy into a certified workstation, rather than an off-the shelf PC.