With a significant boost in 3D graphics performance this impressive Small Form Factor (SFF) workstation should appeal to a much wider audience. By Greg Corke

The Small Form Factor (SFF) workstation has become a big seller in recent years. And that’s hardly a surprise. After all, why buy a standard tower workstation when you can get similar spec components in a significantly smaller chassis? While this may ring true for CPU, storage and memory, there has always been a trade off when it comes to 3D graphics.

A SFF workstation is limited to an entry-level GPU with a low profile form factor to fit in its space constrained chassis. A ‘tower’, on the other hand, can have much more powerful graphics.

Entry-level GPUs are fine if you only use AutoCAD, or model small structures in Revit, ArchiCAD and the like. But once you start scaling up to bigger assemblies or need to increase the realism of your models, some may find them a little underpowered.

Earlier this year, Nvidia launched the Quadro K1200, a new low profile graphics card designed specifically for small form factor workstations. With a performance profile that sits between the Quadro K620 and Quadro K2200, and with 4GB GDDR5 memory, it gives CAD users a little more power to play with.

The ThinkStation P300 SFF offers a massive choice of CPUs, including Intel Celeron, Pentium, Core i3, Core i5 and Core i7 and Intel Xeon E3-1200 v3 series.

For this review, we had one of the top models — the CAD-focused quad core Intel Xeon E3 1276v3 CPU (3.6GHz), which was amply supported by 32GB DDR3 memory making it suitable for working with hefty BIM models. The Quadro K1200 provided the all-important graphics processing.

We loaded up some fairly sizeable CAD and BIM models and found the machine to be very responsive on the whole. It kept pretty good pace when models were rendered in shaded and edges mode but performance dropped off a little more as higher quality shading and reflections were switched on.

To test CPU power we hammered the machine in 3ds Max Design 2015. Performance was as expected for an entry-level CAD machine and, despite the compact chassis and relatively small fans, noise was largely unaffected, with only a quiet background hum.

That’s not to say it isn’t well engineered. It may lack the finesse of the P900 with its plastic shrouds and red touch points, but serviceability is still good with easy access to memory, CPU and GPU. Pull on a blue clip and the drive bay assembly pivots 90 degrees to give easy access to the storage and optical drive.

Lenovo scores highly for the amount of storage you can fit in this SFF machine. In addition to the main drive bays, which can hold two drives as standard (one 3.5-inch and one 2.5-inch, or two 2.5-inch) an optional third drive can be added at the expense of the full-sized optical drive. Swapping out this so-called ‘FLEX module’ for a slimline DVD is a fiddly operation, so perhaps best factory installed, but it can give you 9TB in total. Considering the size of this entry-level machine, this is hugely impressive.

The Small Form Factor (SFF) workstation has always been a firm favourite at AEC Magazine, so it’s great to see innovation happening in this space. Adding more 3D graphics performance is a hugely significant move that should broaden the appeal of the ThinkStation P300 SFF to more demanding users of 3D CAD and BIM software.

There’s not enough here for those pushing the limits of CAD, and certainly not for design visualisation, but for mainstream 3D CAD users looking for a capable machine that will sit pretty on any desk, it’s well worth a look. 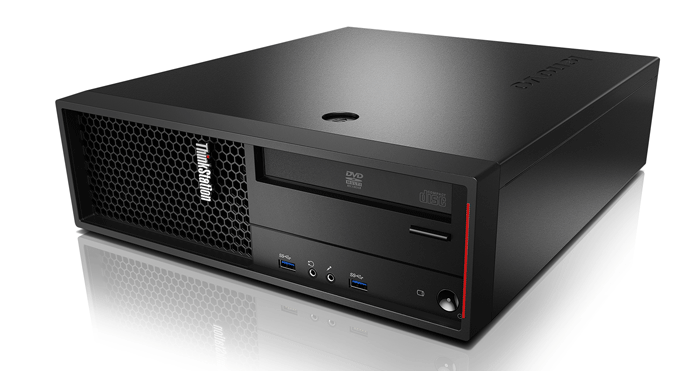