Design and technology leaders at HOK share their thoughts on the metaverse, and the role that architects and designers can play in shaping this exciting new immersive world

Is it an overhyped buzzword co- opted from a 1990s sci-fi novel or a multi-trillion-dollar oppor tunity that will affect nearly every part of our lives? And what exactly is it?

There are nearly as many working definitions of the metaverse as there are opinions about what it will mean to architects and designers. But it’s often used to describe a future iteration of the internet that immerses people in a 3D virtual reality world where people can interact and conduct real-world activities.

Whatever the definition, the metaverse is coming. Consider ubiquitous smartphones and watches, AR/VR headsets, immersive video games, Peloton screens and futuristic Tesla dashboards. In many ways it’s already here. As Moore’s Law kicks in and technology continues to accelerate this convergence of physical and digital environments, the design profession will need to stay one step ahead.

The 3D, immersive metaverse will facilitate changes in how design firms work, the services they provide and the products they deliver. The opportunities range from creating a parallel digital universe that mimics the physical world to developing entirely new universes—and revenue streams.

Designers of the built environment are poised for immediate engagement with the metaverse. “All the physical spaces we design—interiors, buildings, campuses and cities—are born as meta spaces,” says Brian Jencek, HOK’s San Francisco-based director of planning. “We just call them 3D models. We’re already using many of the tools that game designers use— including Blender, Unreal Engine, Unity and Twinmotion—to create realisticlooking virtual environments.”

HOK has long used virtual reality (VR) and augmented reality (AR) tools to immerse clients in a proposed space, be it a stadium, hospital, office or lab. These tools can simulate building performance and play out various scenarios. They can model New York City, for example, to show what it will look like if the population grows by 10 million and the sea level rises by six feet.

Emerging technology will make it possible to meet with a client inside a proposed or existing building and alter the design in real time. Or for firms to host virtual spaces where, via realistic avatars, designers scattered all over the world can come together to collaborate. It also will be possible to create a true digital twin—a virtual model that accurately reflects a real building and is updated with real-time data. “A digital twin will receive data from connected Internet of Things sensors to tell the story of a building’s performance throughout its life cycle, from design through operations,” says Chloe Sun, design technology specialist in HOK’s Toronto office.

For now, however, virtual buildings predominantly remain read-only environments that only change as their owners publish updates. “The technology doesn’t exist yet to replicate 3D space in a fidelity that captures anything more than static elements with data links,” says Greg Schleusner, HOK’s New York-based director of design technology. “We don’t even have ways to model something as simple as a person walking through a door.”

At what point will the metaverse be realistic enough to simulate reality?

“People are really good at spotting fakes,” says Jencek. “I could show you a rendering where I have used Photoshop to change one digital asset and you would see it in seconds. Though the technology has never been better, we have a lot of work to do if the metaverse is intended to twin reality.”

Another vision for the metaverse looks past digital tools, sensors and data to focus on the creation of immersive environments that bear no semblance to reality. “It’s strange to escape gravity only to re-create it in virtual buildings,” says Jencek.

“What if we designed a digital-only stadium where you were floating above the field and there were people around you in every direction: up, down, left, right and everywhere? Do you want to fly to the International Space Station? Or own an NFT of a virtual chateau on a virtual piece of land in the Swiss Alps? We’ll even include the goats! As someone anchored in reality, I’m torn. But one of our roles in the metaverse can be to design these fantastical environments.”

A digital building twin also could be used to enhance people’s experiences in its real-life counterpart. “Imagine an arena that holds thousands of people for a live concert,” says Sun. “By using a digital twin, the performer will be able to accommodate a much larger audience— potentially millions—to attend virtually and interact with each other.”

As someone anchored in reality, I’m torn. But one of our roles in the metaverse can be to design these fantastical environments

Epic Games has already hosted a series of interactive musical performances, including Travis Scott and Ariana Grande, in its “Fortnite” video game. “We could design 20 different skins for that concert venue where the users choose their preferred thematic experience,” says Rashed Singaby, senior project designer for HOK in Kansas City. “Or we could design our own digital art assets that have value for sale as NFTs. Not to mention how our portfolio of projects can be experienced differently in the metaverse, with viewers able to virtually tour the buildings we designed. Between designing for the metaverse and leveraging its capabilities, the potential is almost limitless.”

The challenge for architects accustomed to overcoming constraints will be to free their imaginations to think on the level of fantasy possible in the virtual world. “There are no rules for buildings in video games,” says Singaby. “Architects can tap into what video game designers have been doing to create captivating, fantasy experiences. More of us may need to learn to code.”

“Every designer has amazing designs sleeping in their hard drives,” adds Sun, who already knows how to code. “We can revitalise them in the metaverse, where we have more opportunities to share our creativity with the world.”

As building designers monitor the patterns and needs of this growing virtual world, they can begin cultivating design standards. When HOK started to build its knowledge about designing for Esports, designers studied several popular video games, like “League of Legends,” to understand how their competitive events worked. “We then examined the traditional sports market—from venue layout and amenities to how these sports were being produced for broadcast— for cues,” says Singaby. “From this we developed design standards for venues to accommodate Esports. And as traditional sports leagues noticed the blend of physical and digital in Esports events, they were able to learn from and capture some of that magic.”

Will the same type of evolution toward immersive computing experiences also transform the design of other building types? “It’s already starting to happen across workplace, healthcare, education, entertainment and retail projects,” says Singaby. “Designers for every market should be thinking about how the metaverse could dramatically change what their clients need over the next ten years.” ESG in the Metaverse There will be a host of environment, social and governance issues to grapple with in the metaverse.

On the environmental side, the increased data processing and network traffic required to power the virtual world could vastly increase consumption of electricity. At the same time, conducting more of our activities in the digital world would reduce carbon emissions from transportation while curbing resource use and waste. “I worry about the overall effect on humanity of disengaging from nature,” says David Weatherhead, a design principal for HOK in London. “We are biological beings, not digital objects.”

The metaverse will be more accessible for designers. “We all have relatively equal opportunities in the metaverse market regardless of gender, race, nationality or sexual orientation,” says Sun. “We also can design culturally inclusive, accessible environments.”

Maintaining actual digital twins of physical buildings could advance equity. “This hybridisation of a building will offer people on- and off-site access to many of its resources,” says Mark Cichy, director of design technology in HOK’s Toronto studio.

We all have relatively equal opportunities in the metaverse market regardless of gender, race, nationality or sexual orientation We also can design culturally inclusive, accessible environments

As more real people engage in the virtual worlds of the metaverse, designers will have to consider issues related to governance, security, safety and privacy. A crime that can be committed in the real world—like harassment or theft—most likely has a parallel in the metaverse.

“What are the rules and laws people in respectful virtual communities need to abide by?” asks Singaby. “It’s not our issue as architects to solve, but the stewardship and safety of that space is part of our responsibility as advocates for humanity.”

Designers of one-dimensional, digital only buildings aren’t constrained by codes, materiality, constructability or even gravity.

The rules architects are accustomed to following vanish in the ether of the metaverse, where a building doesn’t even need to look like a building.

“Yet as architects in the real world, we spend a lot of time optimising the restrictions we’re given,” says Weatherhead. “When I was part of a team designing the world’s tallest building, our goal was to make it as tall as we could while ensuring it was technically feasible and affordable to build. Without those practical limitations, our skills and ability to innovate could be somewhat devalued and engineering goes away.”

Cichy agrees that there’s a risk in the metaverse of commoditising the role of architects. “We’re there with our clients from the beginning of a building’s design all the way through occupancy and ongoing operations,” he says. “What architects do is so much more powerful and rich than just aesthetics.” 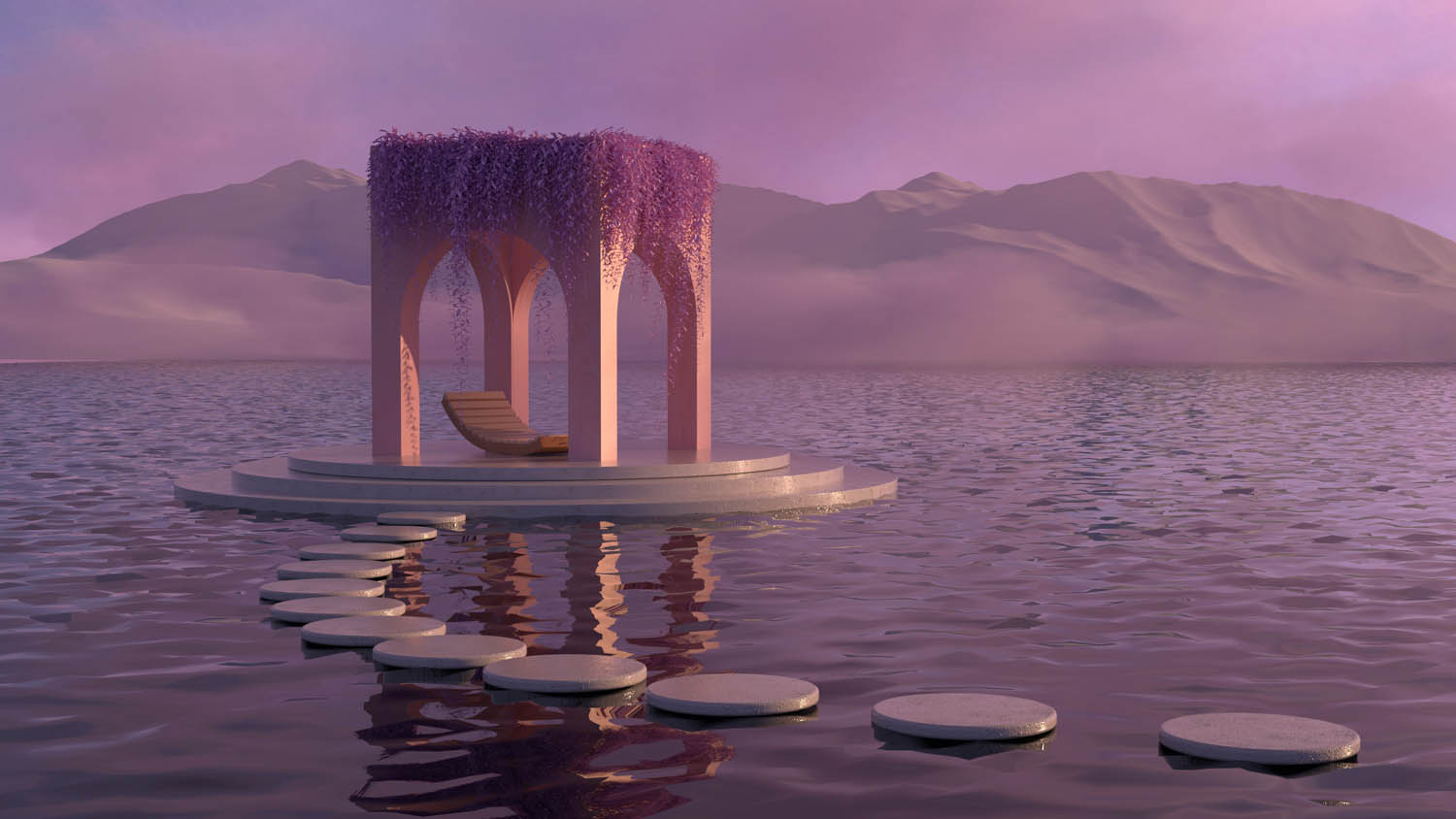 The idea of using the metaverse solely as an escape from reality—a fictional world where people don’t have to physically interact—also sounds dystopian to some designers, who tend to be optimistic by nature and would much prefer to build a better reality. “We don’t just want to reject the real world because it’s difficult or has problems,” says Schleusner. “That’s the ‘Ready Player One’ version that’s so popular in movies. We want to keep advocating for the version of the metaverse that maps to and helps the real world.”

Imagine AR providing a 3D modelled overlay on what we see in the physical world. Perhaps we could be walking through a park and see how healthy a tree is. Or view information about an historic building. “The bi-directional flow of information between digital worlds and the built environment offers tremendous value,” says Cichy.

Though he admits to being intrigued by the infinite dimension of user experiences that architects could create in the metaverse, Weatherhead has yet to be moved by a digital-only design. “But I can easily feel moved by experiencing a great piece of architecture,” he says. “We have a long way to go before we can imbue digital buildings with that kind of emotional power and meaning. For now, we can use these tools to keep making the real world a better place.”

The discussion about the role of architects and designers in connecting the physical and virtual worlds has only just begun and will keep evolving as new layers emerge.

Though acknowledging it can be frightening for some because it’s new, Singaby believes designers must embrace this opportunity. “It will be better for us to help define this new digital world than to ignore it,” he says. “It’s happening. And it’s up to us to decide how we want to participate.”