‘Resolve’ is a new collaborative VR tool for AEC firms, designed to get around the model size limitations of the Oculus Quest wireless VR headset.

According to the developer, InsiteVR, Resolve’s model loading engine is capable of opening complex building models with hundreds of millions of polygons. Customers with beta access have reported opening files as large as 1.6GB from Navisworks and 10GB from Revit.

Unlike other VR headsets, the Oculus Quest is completely self-contained, requires little setup, and does not need to be tethered to a workstation via a cable. However, the built-in processor is significantly less powerful than those used in 3D-accelerated workstations, so AEC firms have typically needed to manually section and simplify complex models.

Resolve’s custom engine gets around this by taking an arbitrarily complex BIM model and ‘programmatically rendering ‘high detail content’ in your field of view. The software does not rely on the Quest having a connection to a computer or video stream; instead it downloads the entire model into the headset’s permanent storage (64GB or 128GB) and then streams the relevant parts of the model into memory (4GB), as required.

“We know construction site offices can sometimes have low bandwidth networks, so we wanted to make it resilient against this,” says Angel Say, CEO of InsiteVR.

Resolve works by trying to render as much as it can, before the hardware limits of the Quest are reached. The software does allow a whole building to be viewed, but less detail will be seen. Say told AEC Magazine that in some cases the building shape itself may be so complex that it has to only render a specific area at a given time.

Say admits there is room for improvement and the next phase of the development is in enhancing the quality of the “afar experience.” “We do have a dollhouse mode which lets you get an overview of the model and loads in detail depending on what you’re looking at. It’s a bit like exploring Google Earth or maps,” he says.

Dollhouse mode allows teams to get an overview of a model

In terms of functionality, Resolve provides a collaborative virtual environment for teams to review and interact with building models at full scale – with a view to decreasing the number of expensive errors on site and late stage changes.

Resolve provides teams meeting in VR with a suite of tools including logging issues via speech-to-text, measuring, sketching, and inspecting BIM properties. The software is heavily focused on the Oculus Quest but there is also a PC companion app to see what others are seeing in VR.

Resolve connects directly to Autodesk’s Construction Cloud, so teams can bring model data into VR and sync issues. It can be used to review Revit, Navisworks, and 70 other file formats supported by BIM 360 Docs. 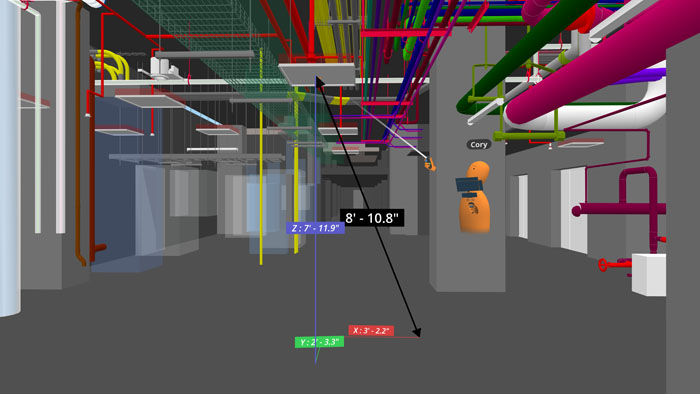