Everyone wants their laptop to be slim and light, and there are several impressive 15-inch mobile workstations out there that come in under 2kg. But while the Dell Precision 5540, HP ZBook Studio G5 and Lenovo ThinkPad P1 might be perfect for 3D CAD, they will likely fall short in more demanding workflows.

When Dell launched the chunkier Precision 7540 in May 2019, it followed a familiar template for mainstream 15-inch mobile workstations: top-end mobile CPU (up to an 8-core Intel Xeon), lots of memory (up to 128GB), plenty of storage (up to three drives), but a more conservative selection of GPUs, maxing out with the Nvidia Quadro RTX 3000 (6GB).

The machine proved great for CPU-intensive workflows, such as ray trace rendering, simulation and point cloud processing. But the Quadro RTX 3000 was only really suited to entry-level real-time viz, GPU rendering and VR.

As Dell’s more demanding customers were led to the 17-inch Precision 7740 and its high-end Quadro RTX 5000 (16GB) GPU, other manufacturers were looking to pick up business by offering the same GPU in a 15-inch mobile workstation, a form factor that’s smaller and lighter and considerably more popular.

Lenovo was the first to break the mould. With its ThinkPad P53, it became the first major workstation OEM to offer such a high-end GPU in a 15-inch mobile workstation. Acer, Asus, BOXX, MSI and Razer also delivered 15-inch laptops with the Quadro RTX 5000.

In response to this competition, Dell completely re-engineered the cooling system in the Precision 7540, so that it can take the Quadro RTX 5000. What’s more, Dell reckons it can run it at 80W, which it claims is 10W more than the Lenovo ThinkPad P53. Update 3/02/20 Lenovo has informed AEC Magazine that the Quadro RTX 5000 in its ThinkPad P53 also runs at 80W

The Quadro RTX 5000 might grab the headlines, but there’s a lot more to this mobile workstation than simply a powerful GPU. The Precision 7540’s chassis is incredibly well-built and feels extremely solid.

A larger chassis does have its benefits. Unlike the slender Precision 5540, there’s a full-sized keyboard, complete with number pad for punching in dimensions. There’s a little bit of flex in the middle of the deck when typing, but it generally feels nice to use. 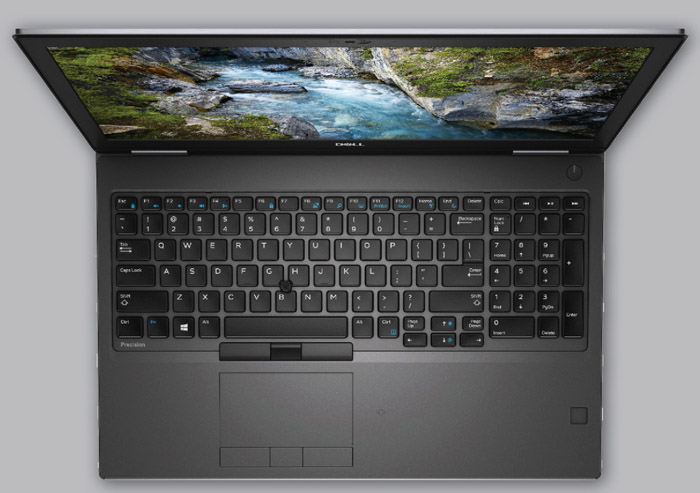 The trackpad is of a decent size with a good amount of resistance and three clickable buttons. There’s also a trackpoint with its own set of buttons below the space bar. But for precise design work in general, we’d always recommend an external mouse.

There’s a choice of four displays: three are FHD (1,920 x 1,080) and one is 4K (3,840 x 2,160). We’re used to seeing nice displays on Dell mobile workstations and the 4K IGZO panel that came with our review unit is no different. Linework in CAD is super-sharp and colours are notably vivid. The panel supports 100% of the Adobe RGB colour space, so you should pick up nice subtleties in your renders.

4K on a 15.6-inch display means a very high-pixel density. To avoid tiny icons and text that’s unreadable to ageing eyes, Windows ramps things up to 250%, but we found the best balance to be at 200%. If you’re on a tight budget and don’t need 4K, you can save yourself around £300 by choosing a more basic FHD panel.

In terms of connectivity, the machine is relatively well-equipped. There are 2 x USB 3.1 Type A ports w/PowerShare on the right, 2 x Thunderbolt 3 Type C ports on the left, and a mini DisplayPort 1.4, HDMI 2.0 and Ethernet at the rear. Those with multiple USB Type A peripherals can always plug in a hub or use a USB Type C to A adapter, as we did when setting up an Oculus Rift VR headset with two sensors.

Key repairs and upgrades are relatively simple. After loosening five Philips screws, the back panel pops off, giving access to the battery, storage and two of the four memory slots.

If your workflows aren’t particularly multi-threaded, you could save yourself between £120 and £180 by going down to six cores, but you will lose a little bit of single-threaded performance as well: the six-core Xeon E-2276M and Core i7-9850H, for example, peak at 4.7GHz and 4.6GHz respectively.

For GPUs, there’s an equally big choice. This includes the entry-level AMD Radeon Pro WX 3200 (4GB), Nvidia Quadro T1000 (4GB) and T2000 (4GB), the mid-range Nvidia Quadro RTX 3000 (6GB) and RTX 4000 (8GB) and, of course, the high-end Nvidia Quadro RTX 5000 (16GB). If you simply work with 3D CAD and therefore don’t need anything more than the Quadro T2000, you’re probably better served by the smaller and lighter Dell Precision 5540. The machine can be fitted with up to 128GB of RAM, spread across four DIMMs. Our test unit came with 64GB (2 x 32GB) of DDR4 2666MHz Non-ECC memory, fitted behind the keyboard. This should be plenty for most users, but should your needs change, there are two slots free for upgrades.

For those who work with very large datasets this an important consideration, as the price per GB of SSDs is still significantly higher than it is for HDDs.

Our test unit came with single 512GB ‘Class 50’ SSD, an SK Hynix PC601. We found very little information about this particular SSD, which may or not be used in other Precision 7540s (Dell uses a range of suppliers). However, in Dell speak ‘Class 50’ means better performance than ‘Class 40’, where an equivalent capacity SSD is £200 cheaper. For many professional users, a more important metric is endurance, but we couldn’t find any data on this.

The Precision 7540 is built for performance and we were largely impressed with the results from our real-world tests.

Exporting an IGES model from 3D CAD software Solidworks took 82 secs and for this single-threaded process, the Xeon E2286M CPU maintained a clock speed of 4.7GHz. This is on par with most desktop workstations.

Using all eight CPU cores, a 4K render in Luxion KeyShot took 381 seconds. This is slower than you’d expect from a top-end eight-core desktop CPU but considering the Xeon E2286M has a TDP of 45W and a base clock speed of 2.4GHz, we were very impressed that it hit 3.2GHz for the duration of the test. In fact, it even maintained this frequency when rendering for over an hour, with fan noise at quite acceptable levels.

Putting the Quadro RTX 5000 through its paces in Autodesk VRED Professional, an application used extensively in automotive design, 3D performance was good at 4K resolution. We got a smooth 42 frames per second (FPS) with anti-aliasing (AA) off and 26 FPS with AA set to medium. This is slightly faster than we’d expect from a desktop Quadro RTX 4000, but slower than a desktop Quadro RTX 5000.

In Enscape, a popular real-time viz tool for architecture, we got an adequate 17 FPS at 4K with our large architectural scene. Here, performance was almost identical to a desktop Quadro RTX 4000.

Of course, the Quadro RTX 5000 is also VR ready and we had a very good flicker-free experience with an Oculus Rift in both Autodesk VRED Professional and Enscape. With newer, higher resolution VR headsets, you’d likely see a bit of drop in performance here.

The machine was a fair bit off the pace in GPU rendering. The Quadro RTX 5000 took about 40% longer to render a scene than a desktop Quadro RTX 4000. This was in both the V-Ray NEXT benchmark and Solidworks Visualize. This could be down to sustained demands on the GPU. With interactive graphics, the GPU is taxed on and off as and when you move the model, whereas with GPU rendering, it is hammered for extended periods. In one eight-minute render, for example, as the GPU heated up, we saw the clock speed drop from around 1,500MHz to 1,200MHz.

What these results show is that while the mobile Quadro RTX 5000 might have the same name as its desktop counterpart and be built from the same silicon, you can’t expect the same performance. This is down to the available power and the challenges of keeping a hot GPU running cool in a small space.

To put this in perspective, the Quadro RTX 5000 runs up to 80W in the Precision 7540, up to 110W in the larger Precision 7740 and up to 265W in a desktop workstation. However, it’s important to note that the relationship between power and performance is non-linear and the performance curve will flatten off above 80W.

To really push the machine to its limits, we started a CPU render and GPU render at the same time. The CPU clocked down to 1.95GHz and GPU utilisation went down from 95% to around 70-80% but the machine remained stable. We could even launch Solidworks and spin a model without it locking up. Most impressively, fan noise never became too loud and the palm rest stayed cool, although the keyboard did get a little warm, but certainly not hot.

We also tested performance when running off battery and were quite surprised, if not completely shocked, at how much the GPU and CPU clocked down. In KeyShot, the CPU dropped to 2.2GHz, taking 45% longer to complete the test render. In Solidworks Visualize the difference was even more dramatic, with the GPU instantly dropping from 1,500MHz to 300MHz. It was so slow, in fact, that we didn’t even wait for our render to finish.

In short, when running off battery, you can get away with rendering on the CPU, but for GPU rendering, you really need to be plugged in. And, of course, any compute intensive operation will drain your battery much more quickly.

Dell has given its mainstream 15-inch mobile workstation a new lease of life with the powerful Nvidia Quadro RTX 5000 GPU. It might not reach the heights of a desktop RTX 5000, and there are questions about performance when GPU rendering, but it gives those with GPU-hungry workflows a strong alternative to the bulkier 17-inch mobile workstation.

When shoehorning powerful components into a small chassis, there’s always a danger that thermals will get out of control. But Dell’s engineering team looks to have done an excellent job here and in our real-world tests, the machine maintained relatively high clock speeds without too much fan noise or heat.

Considering the high-end spec, it will come as little surprise that our review unit costs £4,690 + VAT. Moving down to a Quadro RTX 4000 would save a substantial £812. We’d be interested to learn how this impacts 3D performance, although the drop from 16GB to 8GB of GPU memory should also be considered. With our largest models in Enscape VR and Solidworks Visualize, for example, we were pushing 10 – 11GB.

In summary, those who value performance above anything else would likely be best served by the Precision 7740, or even a desktop workstation, but for a blend of speed, portability and stability in a very well-engineered chassis, the Precision 7540 is hard to beat. 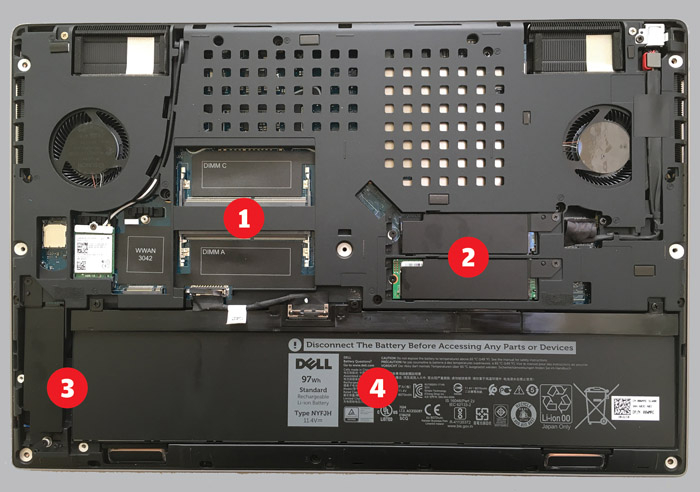 ■ Windows 10 Pro for Workstation (4 Cores Plus)