Well built and with great serviceability, this quad core Intel Xeon desktop workstation can’t fail to impress, but will it be enough to tempt CAD users away from cheaper, entry-level machines?, asks Greg Corke

Anyone on the lookout for a 3D CAD workstation these days faces no shortage of options. Entry-level towers like the Dell Precision 3620, Small Form Factors like the HP Z240 SFF, and micro workstations like the Lenovo ThinkStation P320 Tiny tick all the right boxes when it comes to spec. A quad core CPU, entry-level professional GPU, 32GB RAM and SSD will satisfy the needs of most 3D CAD users. So where does this leave the traditional mainstream tower?

Entry-level workstations might be great for CAD but still fall short for more demanding workflows, including VR, design viz and simulation. They also offer limited expansion and serviceability. It’s in these areas that Dell’s new mainstream tower, the Precision 5820, comes into its own.

The Precision 5820 is built around Intel’s workstation-focused CPU, the Xeon W-Series, based on the Skylake-SP architecture. This new family of CPUs is a direct replacement for the old Xeon E5-1600 series. It is available in variety of models, from four cores all the way up to 18, so it has the flexibility to support more demanding multi-threaded rendering or simulation workflows. In contrast, the Xeon E3-1200 v6 found in entry-level workstations has a maximum of four cores, so its scope is limited.

The quad core Intel Xeon W-2125 (4.0GHz, 4.5GHz Turbo) that came with our test machine doesn’t really show off the true potential of the workstation, but is a solid option for 3D CAD. The 4.5GHz Turbo frequency is hard to beat, only by overclocked systems, and this gives the machine a strong showing in our SolidWorks and PTC Creo benchmarks.

However, with only four cores to play with, performance in design viz applications is nothing to write home about. Those looking to cut render times in Luxion KeyShot, Chaos Group V-Ray or other CPU-based renderers would be well served by a £456 upgrade to the ten core Intel Xeon W-2155 (3.3GHz, 4.5GHz Turbo). If you really take design viz seriously, there’s the 18-core Intel Xeon W-2195 (2.3GHz, 4.3GHz Turbo), but an upgrade will set you back an additional £1,769, almost doubling the price of the machine. Plus, you’ll need to spend £100 more for a licence of Windows 10 Pro for Workstations that supports more than four cores.

Our test machine is rather underspecified when it comes to memory. These days, 16GB (2 x 8GB 2666MHz DDR4 ECC RDIMMs) won’t really cut it for most multi-application product development workflows. And by only using two out of the possible four memory channels, you’re missing out on lots of potential memory bandwidth, which is one of the other benefits that the Xeon W-Series has over the dual-channel Xeon E3-1200 v6. We’d recommend a £358 upgrade to 32GB (4 x 8GB), which would still leave you with four slots free if your memory demands change in the future. The maximum capacity of the machine is 256GB, way beyond the 64GB of most entry-level workstations.

The included Nvidia Quadro P4000 GPU is a great choice for those looking to move beyond CAD into the realms of real-time viz, GPU rendering or entry-level VR. We had a good experience with the Oculus Rift in Autodesk Revit Live and with viewing simple models in Autodesk VRED Professional with anti-aliasing disabled. Likewise, in our game engine tests, we could move models smoothly at FHD (1,920 x 1,080) resolution, though we’d expect things to slow down at 4K. 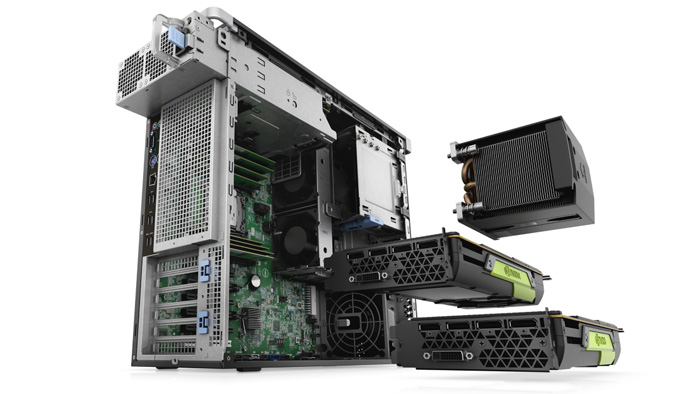 The Quadro P4000 is also available in the Precision 3620, so this isn’t a differentiator from an entry-level machine. One advantage that the Precision 5820 does have is that it can offer significantly more graphics horsepower, going all the way up to dual Nvidia Quadro P6000s or AMD Radeon Pro WX9100s for ultra-high-end VR or GPU rendering.

Storage is another area where the Precision 5820 stands out from entry-level workstations. With support for up to six drives, there’s capacity for up to 24 TB in total, although in reality, this figure will be less as it relies on you having only Hard Disk Drives (HDDs) in your workstation and M.2 SSDs are a necessity these days for performance. 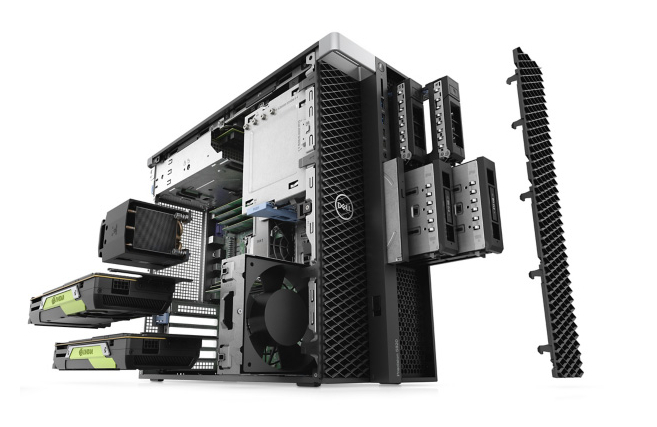 But the Precision 5820 isn’t just about storage capacity. The way in which users can access these drives is very impressive, thanks to a completely redesigned chassis, which makes the 5820 one of the most versatile and serviceable desktops workstations we have ever seen.

Up to four drives can be accessed very quickly from the front of the machine via the new ‘FlexBays’ which are hidden behind an easily removable front panel. 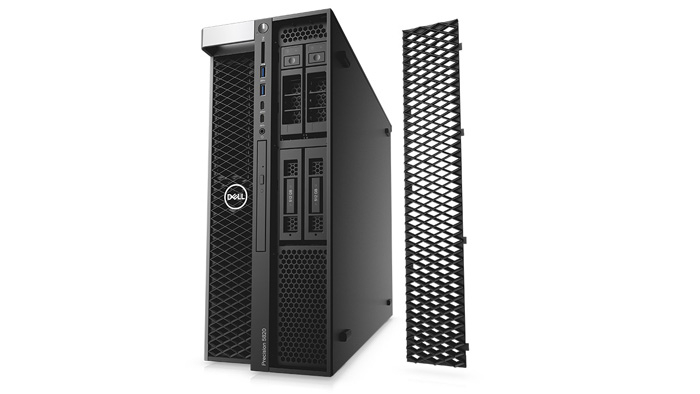 The front facing FlexBays give easy access to M.2 NVMe SSDs, which can be removed with a simple push and click, in exactly the same way as an SD memory card

Importantly, the FlexBays are not limited to 3.5-inch or 2.5-inch drives; they can also support M.2 NVMe SSDs, which can be removed very easily with a simple push and click, in exactly the same way as an SD memory card. The M.2 SSD is housed in a special caddy, so it is protected from wear and tear and mates easily.

Historically, M.2 SSDs have been attached directly to the motherboard with a screw, which makes servicing more difficult, especially for novices. With the push-button mechanism, anyone can replace the 5820’s SSD in seconds. They are also hot swappable, so if it’s used as a data drive, you can move it quickly to another machine without having to power down.

2.5-inch and 3.5-inch drives are equally easy to remove. Simply press a button and out pops a lever that you pull to remove the drive caddy. To replace, simply push back in and it automatically reconnects to power and data. Because it’s so easy to remove drives, optional lockable FlexBays are available in order to keep data secure.

Our test machine has a single M.2 512GB PCIe NVMe Class 40 SSD, which is a good solid option. Depending on how reliant you are on local storage, it might be wise to supplement this with a single 3.5-inch HDD. If you really want to max out the storage on this machine, the 5.25-inch bay can be converted to take two 2.5-inch drives or one 3.5-inch drive. 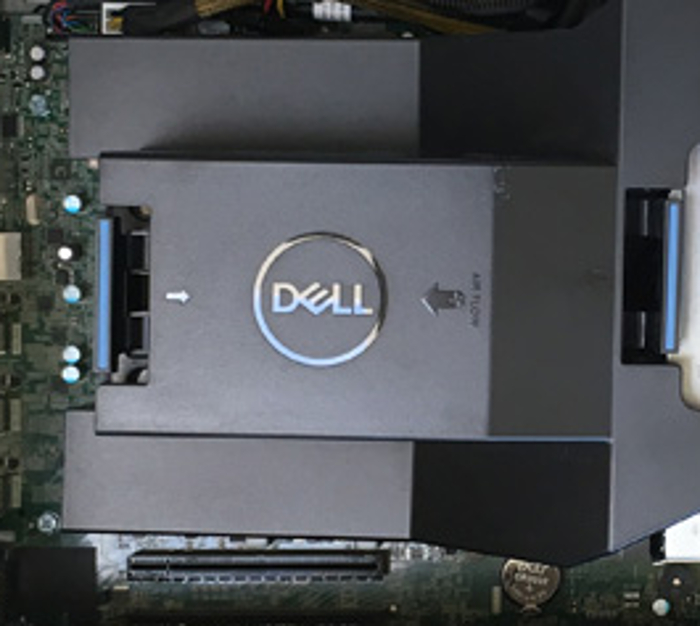 The thermal design spilts air flow into three channels, cooling each bank of memory and the CPU with dedicated fresh air

The power supply is equally easy to replace in the event of a failure. Simply pop a clip and pull it out from the rear of the machine. It’s available in 425W or 950W models, so there’s plenty of power if you load up the machine with two high-end GPUs and max out the memory and storage. Serviceability continues on the inside with a side panel that pops off easily, revealing tool-free access to the GPUs. The memory is laid out intelligently with four DIMM slots set either side of the Xeon processor. Memory and CPU are cooled by two low-duty front fans. A clip-on plastic duct splits the flow into three channels, so each bank of memory and the CPU gets dedicated fresh air with no cross contamination. The result is a very quiet workstation, even under heavy loads.

The multi-channel thermal design not only offers acoustic benefits but also means that the CPU can run at higher clock speeds, even when all four cores are in use. We recorded frequencies of 4.2GHz in V-Ray and 4.4GHz in Keyshot during the 10 mins it took to complete our test.

Despite the machine being very serviceable, the 417.9mm x 176.5mm x 518.3mm chassis is still quite compact. It’s very solid and well built, and therefore quite heavy (15.4kg), but two built-in handles make it very easy to transport.

Dell has obviously spent a lot of time on this brand-new chassis and the design is one of the best we have seen at DEVELOP3D. It’s very well built, very serviceable and very quiet, but quality like this comes at a premium. A similarly specced Dell Precision 3620 would be considerably cheaper, so it depends on what value you place on the chassis.

Of course, as soon as you start ramping up the specs, entry-level workstations can’t compete. With up to 18 cores, dual high-end GPUs and lots of memory, the Dell Precision 5820 is an enviable machine for more demanding design viz, VR and simulation workflows and one we’d wholly recommend.