In late 2016 HP broke the mould with a desktop workstation that was significantly smaller than any other from a major manufacturer. The HP Z2 Mini delivered pretty much everything you’d want from an entry-level workstation for CAD or BIM workflows, but the stylish, angular chassis was only 216mm (w) x 216mm (d) x 58 mm (h) in size.

HP’s space saving workstation looked great on any desk. It could also be mounted under a desk, behind a display, or on a wall, housed in a metal sleeve. It was ideal for small spaces and you could also take it home or to meetings. Read our full review here.

The second-generation HP Z2 (actually called the G4 Edition to get in sync with other HP Z Workstation release cycles) includes some small, but significant tweaks, mostly around the kit that’s inside.

The big news is the inclusion of the new “Coffee Lake” Intel Xeon E-2100 CPUs, which feature up to six cores and clock speeds of up to 4.70 GHz.

Four CPU cores has been the standard in entry-level workstations for over 10 years, so the move to six cores is a big step up for engineering or architecture firms that rely on CAD or BIM software, as well as multi-threaded ray trace renderers.

The flagship CPU on offer is the Intel Xeon E-2176G, which features six cores, a base frequency of 3.70 GHz and a Max Turbo of 4.70 GHz. This is pretty much the fastest Xeon processor you can get for single threaded applications, such as 3D CAD. It’s also a significant step up from the HP Z2 G3’s top-end Xeon E3-1245 v5, which has four cores, a base frequency of 3.50 GHz and Max Turbo of 3.90 GHz. The additional 0.8GHz will make a noticeable difference in CAD / BIM and the six cores should cut render times considerably.

The HP Z2 G4 also offers several 8th Generation Intel Core processors and, for those on a really tight budget, an 8th generation Intel Core i3 and Pentium. In total, there’s a choice of 14 different CPUs, though not all of these are currently available on HP’s UK store.

The other major news is an expansion of GPU options. With the G3 Edition it was Intel Integrated or the Nvidia Quadro P620 (2GB). Now, there’s a choice of three discreet GPUs — two from Nvidia, the Quadro P1000 (4GB) and Quadro P620 (4GB), and one from AMD, the Radeon Pro WX 4150 (4GB). These are mobile MXM GPUs, rather than standard desktop graphics cards, so they can fit inside the compact chassis. In addition to the promise of better raw 3D performance, the additional 2GB of GPU memory should make a difference in some applications.

Other than some minor tweaks, including faster memory (DDR4 2,666MHz vs DDR4 2,400MHz), optional Intel Optane memory and optional Thunderbolt 3.0 / USB 3.1 Type C, the core of the machine remains the same. 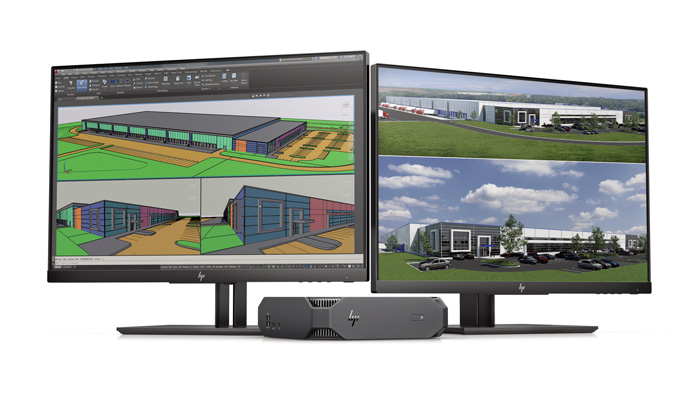 Our test machine featured the top end six core Intel Xeon E-2176G CPU and an AMD Radeon Pro WX 4150 (4GB) GPU. On paper this is a good solid combination for entry-level to mainstream 3D CAD, BIM and rendering which was borne out in our tests.

In Autodesk Revit and Solidworks, 3D performance was pretty good. In these notoriously CPU bound applications, the HP Z2 Mini benefits from the high frequency CPU, which pushes up frame rates. And you wouldn’t get much better from a more powerful GPU. Switching to the new beta graphics engine in Solidworks 2019 generally gave a very fluid viewport experience, even with fairly large assemblies.

However, when pushing the GPU much harder in the viz-focused Enscape, performance was less impressive, but that wasn’t unexpected for such an entry-level GPU. Frame rates peaked around 10 FPS at FHD resolution and the machine became pretty much unusable at 4K resolution. In short, the HP Z2 Mini should only really be considered for 3D CAD and BIM or very light real time viz work at FHD resolution. In saying that, if you do want to get more 3D performance out of this tiny machine, you could potentially plug in an external GPU, such as the Sonnet eGFX Breakaway Box with a Radeon Pro WX 8200, which connects over Thunderbolt 3.0.

In our CPU tests, the HP Z2 Mini was very impressive. The machine exported our IGES test model from Solidworks in 80 seconds and delivered good scores in our single threaded Revit 2019 tests maintaining a clock speed between 4.60 GHz and 4.70 GHz.

In our multi-threaded rendering tests the additional two cores made a huge difference. It completed our KeyShot render in 425 secs, significantly faster than the 733 secs it took the 2017 HP Z2 Mini G3, with a quad core Intel Xeon E3-1245 v5 (3.5GHz, 3.9GHz Turbo).

For the first 20 seconds of the render we got 4.20 GHz out of the Xeon CPU, but this soon went down to 3.90 GHz. Impressively, it managed to maintain this frequency for over an hour with only moderate fan noise.

With 16GB (2 x 8GB) of DDR4 memory, our test machine is only really equipped for moderate 3D datasets, but the Z2 Mini can be configured with up to 32GB. For storage, there’s the classic combination of 256GB M.2 NVMe SSD (HP Z Turbo Drive) for OS and applications and 1TB 2.5-inch HDD for data. 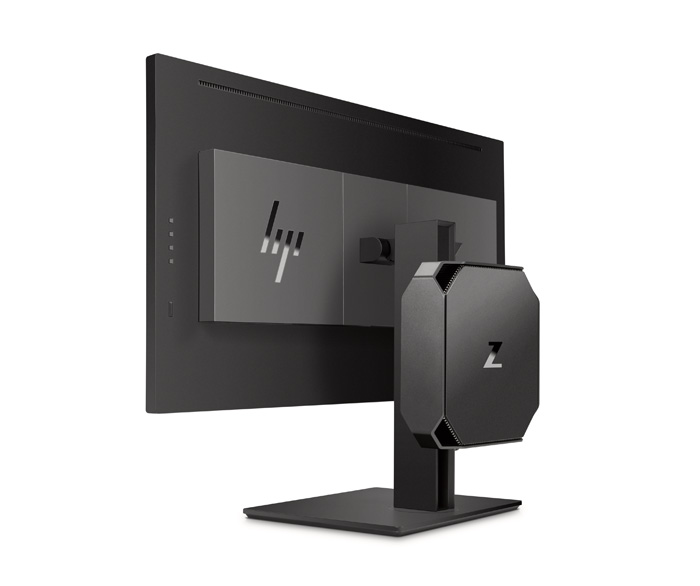 The HP Z2 Mini G4 is a worthy successor to the G3 edition. You get the same stylish, space saving design at a similar price point, but with potentially 50% more CPU cores at higher frequencies. This leads to clear benefits in single threaded CAD / BIM software and multi-threaded rendering software.

The HP Z2 Mini is not the only micro workstation out there (we’re also big fans of the minuscule Lenovo ThinkStation P330) but it’s certainly the fastest. It offers similar levels of performance one can expect from a Small Form Factor tower but with much less bulk.