It’s been a long time coming but, with AMD’s Zen 2, Intel is finally getting some serious competition. Greg Corke reports on Scan’s new Ryzen 3000 workstation

Intel has dominated the workstation landscape for over a decade. Today, almost every new workstation comes with an Intel Core or Intel Xeon processor. You have to go back to 2006 for the last time AMD had a significant market share – when its Opteron CPUs were considerably faster than the Intel CPUs of the time.

It didn’t take long for AMD to lose its performance crown and ever since it has played second fiddle to Intel. As a result, there’s been little incentive for any manufacturer to offer a workstation with an AMD CPU, let alone a major OEM.

But things look to be changing. Last year AMD caught Intel on the back foot with the launch of its 2nd generation Threadripper CPU. Based on AMD’s 12nm Zen+ architecture, the 32-core Threadripper 2990WX offered industry-leading performance in multi-threaded applications – specifically those that can take full advantage of multiple CPU cores, such as ray trace rendering.

Zen+ also made some impact at the low end with AMD’s 2nd generation Ryzen CPU, which offered more cores than Intel at equivalent price points.

Fast forward 12 months and AMD has now closed the gap considerably with its new Ryzen 3000 family of CPUs based on its Zen 2 architecture. Officially, Ryzen 3000 is considered a ‘consumer’ CPU but as we’ve seen with the Intel Core i7 over the years, consumer CPUs can also do a great job for entry-level workstations.

fso farZen 2 is the first mainstream CPU architecture to feature a 7nm manufacturing process. Shrinking down the transistors helps reduce power demands and increase performance. And from what we have seen, single threaded performance is now very close to that of Intel’s current 14nm “Coffee Lake” architecture. AMD might not hit the same clock speeds (GHz) as Coffee Lake but boasts higher performance per clock. In other words, a 4.0GHz Zen 2 chip should be faster than a 4.0GHz Coffee Lake chip. 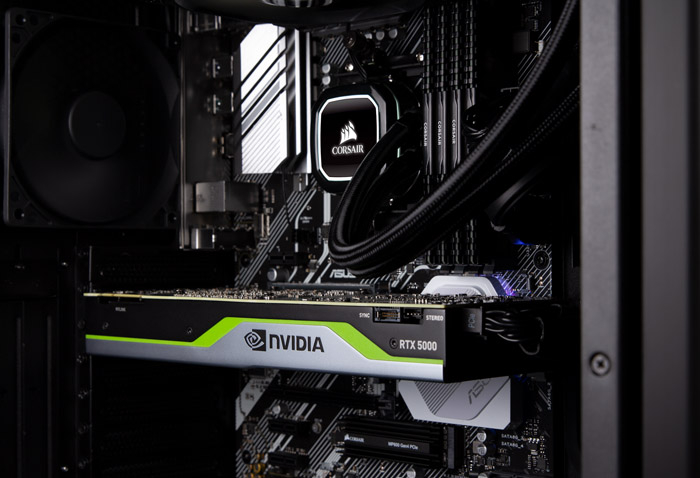 UK firm Scan is one of the first specialist workstation manufacturers to launch a Ryzen 3000 workstation, the Scan 3XS WA4000 VR.

Our review machine is built around the current flagship Ryzen 9 3900X. Rather than going with standard clock speeds, Scan’s engineers have overclocked all 12 cores to 4.3GHz. This is 0.3GHz less than the processor’s boost frequency, so you lose a little bit of single threaded performance, but it should mean you get significantly better multi-threaded performance than an off the shelf 3900X with a base clock speed of 3.6GHz.

The CPU is mounted on an Asus Prime X570-P motherboard, which features the new AMD X570 chipset, the first mainstream chipset to support PCIe 4.0, double the bandwidth of PCIe 3.0.

To take full advantage of the new interface, Scan has chosen a PCIe 4.0 NVMe SSD, the Corsair MP600. It’s rated at 4.95GB/sec sequential read and 4.25GB/sec sequential write, far faster than any PCIe 3.0 SSD. On paper this might sound impressive, but you’ll probably only see significant benefits in specific workflows such as when working with huge single file datasets like those used in simulation, point cloud processing or video editing. For CAD, where the datasets comprise 1,000s of parts and assemblies you probably won’t notice it at all. Of course, it will be very fast at copying files.

The memory is also from Corsair – 64GB (4x 16GB) of Vengeance DDR4 3200MHz. This runs at a higher frequency than most workstation memory. According to Scan, it helps it get more out of the 3rd generation Ryzen chips.

For graphics, Scan has gone for extreme power with the Nvidia Quadro RTX 5000 GPU. If you’re into real time viz, VR or GPU rendering, it’s an excellent choice and with handle sizeable datasets.

For testing, our obvious first port of call was to see what the overclocked AMD Ryzen 9 3900X was capable of. We started with single threaded performance.

For another perspective on single threaded performance, we used the popular BIM tool, Autodesk Revit 2019. It completed the model creation part of the RFO Benchmark v3.2 in 105.9 secs. The HP Z2 Mini G4 did the same test in 100.6 secs – 5% faster. Unfortunately, we don’t have data for the Scan 3XS WI4000 Viz.

This is not a full in-depth analysis by any means but, when comparing an overclocked 4.9GHz Core i7 9900K to an overclocked 4.3GHz AMD Ryzen 9 3900X, we reckon we’re talking about a 10% performance lead for Intel. And if you don’t overclock, and instead rely on the 4.6GHz boost, it could be considerably less.

Either way it’s still significant, but it is dwarfed by the benefits the AMD chip can give you in multithreaded workflows.

In the popular ray tracing application Luxion KeyShot, for example, it rendered our 4K test scene in 163 secs, 56% faster than the overclocked 4.9GHz Intel Core i9 9900K (8 cores). This puzzled us a bit as, theoretically, the performance benefit should be less than 50% as the AMD Ryzen 9 3900X only has 50% more cores and those cores are slower.

In the V-Ray benchmark the Ryzen 9 3900X was 40% faster, which is more in line with what we expected. We imagine you’d have to go up to the 12-core Intel Core-i9 9920X to beat the AMD Ryzen 9 3900X in a rendering test, but as noted earlier such a chip would cost more than twice as much.

As has come to be expected from Scan, we experienced relatively little fan noise when rendering, even when running a KeyShot render for over an hour. This is down to the Corsair Hydro H100x liquid cooler which packs dual 120mm fans and a 240mm radiator neatly at the top of the Corsair Carbide 275Q chassis.

The Nvidia Quadro RTX 5000 costs nearly five times as much as the Ryzen CPU and is a very serious graphics card. It’s the first time we’ve tested the desktop version and, unsurprisingly, it broke all of our benchmark records previously held by the Quadro RTX 4000.

In Autodesk VRED Professional 2019, for example, we got an incredible 12.7 frames per second from our automotive test model at 4K resolution and with anti-aliasing set to ultra-high. That is 55% faster than the Quadro RTX 4000. At 4K with medium anti-aliasing, we got a silky smooth 33 FPS.

The scores from VR Mark were similarly impressive. With the more demanding blue and cyan room tests it was just over 40% faster than the Quadro RTX 4000.

Of course, the Quadro RTX 5000 isn’t just about real time 3D. It’s also a serious card for GPU rendering. In Solidworks Visualize 2019 with de-noising enabled it was about 20% faster than an RTX 4000. However, in the V-Ray 1.08 benchmark it only had a slender lead of 3%. It’s important to note that neither of these applications take advantage of the RTX ray tracing cores. This will come in Solidworks Visualize 2020 and a future version of V-Ray GPU.

It’s hard to find fault with the Scan 3XS WA4000 VR. It offers incredible performance, good build quality and impressive acoustics. But the Quadro RTX 5000, which takes up the bulk of the £3,083 price tag, somewhat overshadows the real star of the show, which is the AMD Ryzen 9 3900X.

For the first time since 2006, Intel looks to be getting some serious competition from AMD. Featuring 12 cores clocked at 4.3GHz, the Ryzen 9 3900X gives you the kind of multi-threaded performance previously only seen in CPUs that cost significantly more. And, most importantly, it does so without sacrificing single threaded performance.

For around the same price, Scan offers an overclocked 4.9GHz Intel Core i9 9900K workstation. By choosing AMD over Intel, you’ll likely forgo around 10% of single threaded performance, but you should cut your render times by around 40-50%. For many, that will be a sacrifice definitely worth making. In addition, you could close the single threaded performance gap by not overclocking all 12 cores and boosting single core frequency by 0.3GHz.

We see the biggest opportunity for AMD and 3rd gen Ryzen being with CAD users who rely on CPU renderers like Luxion KeyShot or those built into their workhorse CAD tool. So many designers, engineers and architects out there have workstations with four CPU cores. Investing in a new one with 12 cores at a similar price point is a huge step up. And when coupled with a CAD-focused GPU like the Quadro P1000, you can get a decent machine for just over £1,500.

Scan is an incredibly agile workstation manufacturer, so we’re not surprised that it’s one of the first to take advantage of the new AMD chip. But on a global stage, its market share is incredibly small. For AMD to truly take the fight to Intel it needs to land a major workstation OEM, like it did with HP and Siemens back in the mid 2000s. We’ve heard rumours that this could happen with Ryzen and, if it does, the increased competition with Intel can only mean good news for the customer. 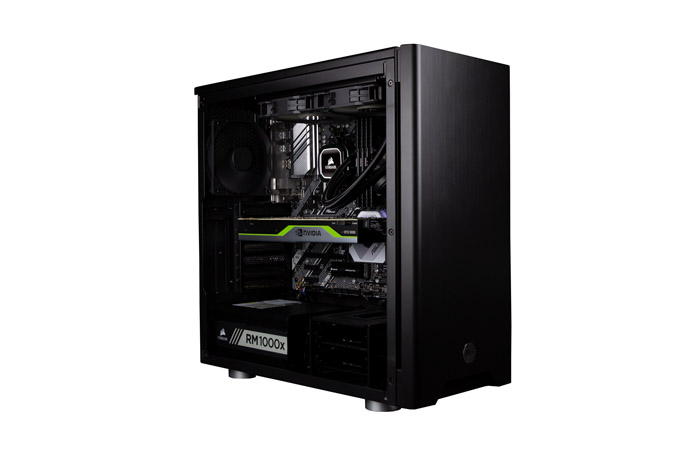