AEC Magazine: There is always a lot of complaining about IFC and COBie deliverables. Has IFC improved over the last five years?

Simon Gilbert: Yes, massively. I think the problem actually is related to education. People have to understand that it’s not just about IFC being a ‘File Save As’ process. It’s about a snapshot in time, combining data and geometry, a project deliverable. If you think of it that way, you have to ask, ‘What are we delivering?’ It’s not just a file format; it’s a subset of data that users have to configure and understand. If users know what they are doing they can export a good quality IFC file, that can be used for the project with confidence in its consistency.

AEC: A lot of the complexity isn’t helped with the way certain popular products, like Revit don’t handle IFC properly.

SG: This is what we struggle with on a day-to-day basis, it’s not only limited to Revit may I add. A common problem is that users cannot coordinate their models correctly. This is partly due to a lack of knowledge but made worse by the complexity of the coordinate systems implemented by authoring software’s. When working in a closed single proprietary system, these tend to be overlooked, but the data created may not be coordinated correctly in real world space. These are usually flagged up when checking federated models with the introduction of additional files from different vendors.

The lack of some software not to fully support true Ifc containers and propertySet data is apparent when delivering COBie. A couple of examples of IfcContainer issues are IfcZone and IfcSystems within Revit. With IfcZones although there is a mechanism provided for Spaces in the Mechanical delivery, a manual process has to be adopted for the Architectural Rooms.

A system for Revit MEP components contains only pipe and duct services but, actually, a IFC system is a collection of any objects, however you can’t create your IFC systems with anything else. So rather than creating a container and properties once that you assign objects to, you have to apply this information individually to each of the objects. This is the same process that has to be adopted for IfcZones.

But the inability to create user based propertysets creates a decision on export. Mapping processes result in either an ifc export which does not support the external data standard, or does support it, but provides a mismatch between the Ifc file and the native model data.

These and other issues are all items that users need to understand. People aren’t using the right builds of IFC exporter, or they use the one straight out of the box. Some haven’t even been updated to the latest patches of Revit. We’re talking absolute basics.

AEC: Do the customers actually know what COBie is?

SG: There are clients who ask for it but don’t really understand what they are asking for and were still in the educational process with people. Design consultants continue to provide their usual deliverables. It’s really hard. But when customers/consultants really understand exactly why you would be doing it, and what benefits it actually has, it makes sense. So, there’s no excuse to actually deliver it badly.

AEC: What’s the fix for the quality market?

SG: Policing and it’s got to come initially from the client end. The client needs to understand that it’s no longer acceptable to have a building which is apparently coordinated correctly and has some sort of data associated with it. It’s about education of the clients to understand and to get more involved in what they are actually asking for, and what they’re demanding and making sure that they receive those deliverables, quality assured and on time.

AEC: What percentage of users do you think write decent COBie?

SG: A very difficult question. I don’t know to be quite honest. In virtually every project that we work on there’s usually a lot of misunderstanding. Understanding the structure and the reasons behind the data requirements removes the confusion. Generally once people understand why they are providing a piece of data everything falls into place. Saying that, the project I’m currently working on with an architect who’s delivering it for the contractor, is probably the closest that we’ve actually got to a true definition of COBie. Data is being created correctly assigned to the right elements and critically the parties involved understand the process and data that is required to be delivered.

The property sets are all correct, and they’re trying to do it correctly. Many people don’t even think about the naming convention for objects and just utilise the design object name. In COBie your Type and Component sheet should represent real world values.

It has to make sense to people. Many customers initially try and do this inside Revit, generating individual delivery data exported to Excel for the different design disciplines involved. This can result in duplicate data and geometry, which then results in errors based on the consistency between models. These individual discipline sheets are then stitched together. It doesn’t take a genius to work out that you should be doing all this from a federated model. 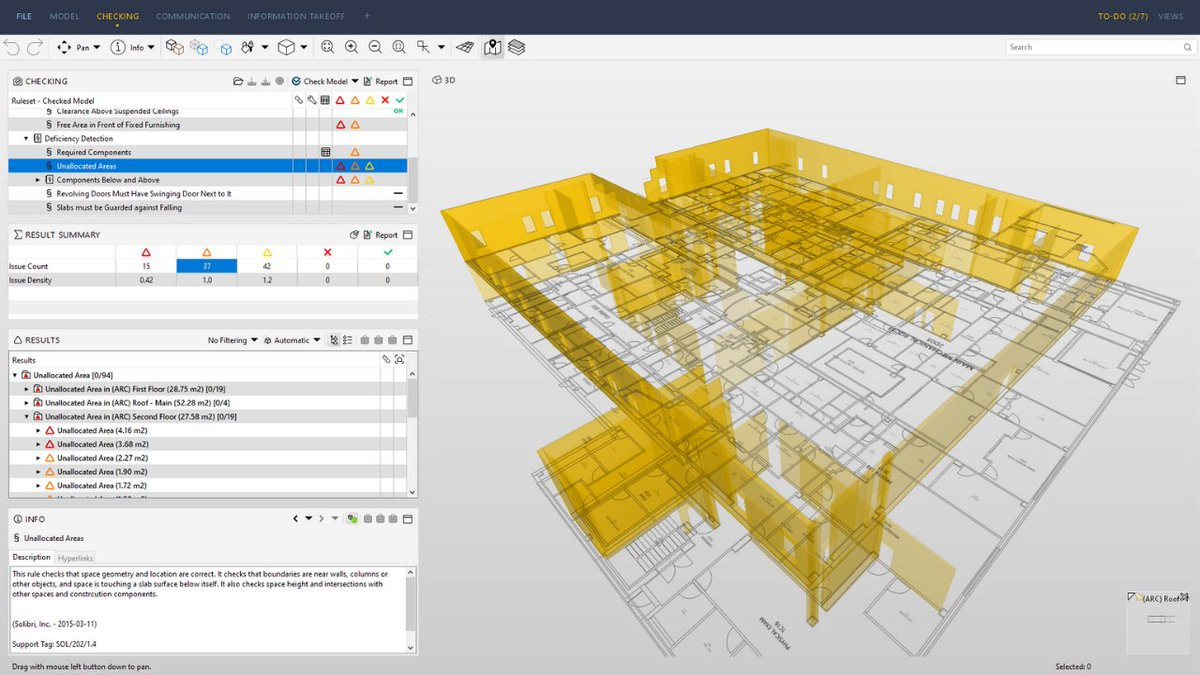 AEC: How can firms build quality into their models?

SG: People look at Solibri as a way to get a quality COBie deliverable. From the consultants delivering this information, they need understand that quality assurance and the quality of their models actually starts right back at home. They then need to go through the process of understanding their data and current modelling standards. Quality assurance is a continual refinement process. Not only will this produce better more consistent models, but will enable easier more efficient checking of these models within Solibri for anybody delivering the COBie data on behalf of the client. With future decisions being made based on the data in the model it is imperative that what is delivered has been validated and is correct.

AEC: Sounds like in the future we might need Solibri to monitor in real time when people are creating BIM geometry?

SG: That is potentially where it’s going, yes. We are involved in two of projects with the Central Innovation Hub and Innovate UK. Here, we’re looking into the automated compliance for building regulation.

AEC: With all the focus on 3D deliverables, lots of firms are looking to automate the 2D drawings and don’t want to be sucked into the traditional deliverables.

SG: What we need to do in the industry is change the delivery mechanism. The challenge will be to somehow move the delivery structure away from the traditional methods so that we can actually delivery quality models and data without losing the current requirements for documentation deliverables. As an industry we are trying to adopt new work practices and procedures, but the progress is hampered by continually being pulled back to deliver traditional documentation in an industry that is difficult to change. There were clear processes with 2D drawings, someone would check the drawing and approve them, that quality control check hasn’t yet transferred to the 3D deliverables as a general rule. We often hear when introducing the concept of Solibri and model checking “that’s great, we’ll do it when we’re told we have to do it”. We, as an industry seem to have lost the sense of pride in your work.