AM System UK is using the latest in 3D building information modelling (BIM) techniques to effectively design and deliver all sizes of store and concession for client Sony and other leading electronic goods, sports and footwear retailers. Projects range from small concessions within shops to flagship Sony Centres, such as the one recently opened in Heathrow Terminal Five, and innovative uses of unusual sites such as Scotch Hall shopping centre in Drogheda.

AM System UK is not an architect: it is a retail fit-out and manufacturing company. ýRetail interior design is no longer simple shelving systems,¯ says Helen Morse, design department manager at AM System UK. ýShop interiors are becoming far more sophisticated and architectural.

ýThis means we need to have more control over our designs and we have to be able to explain their intricacies to the client in a way that is easy to understand. 3D design enables us to model the space and design the store with amazing accuracy: it also allows the client to see clearly what theyÝll be getting right from the start.¯

Based in Leicestershire, AM System UK has been operating for 50 years and was originally part of a Danish company. As digital design took off the Danish operation worked on AutoCAD. However, AM System UK investigated its 3D design capabilities and found that converting from 2D to 3D proved time consuming.

Although many of its sub-contractors and some architects still work in 2D, AM System UK has been a user of ArchiCADÝs 3D model-based design capabilities for some time.

Helen Morse says: ýWe found that GraphisoftÝs ArchiCAD software was far more efficient and easier to use when converting from 2D to 3D. Its design capabilities are also of paramount importance. Even when an architect supplies us with 2D data for the shell of a retail unit we remodel it in 3D before designing the store inside it. The work then progresses seamlessly from concept to detailed design stage using the same 3D model, and, if contractors need 2D drawings we simply output them, and any required detail data, from the model.¯

One example of the benefits of this approach is AM System UKÝs long-running store design relationship with Sony. The electronics giant has opened a flagship store in Heathrow Terminal Five and its innovative design has been made possible by the unique communicative abilities of ArchiCAD.

ýThe T5 store is very different to any other,¯ says AM System UKÝs senior designer Julian Collinge. ýIts design is based on the idea of a technology garden: an experiential area where travellers can interact with products and get information on SonyÝs latest film and music releases, too.¯ 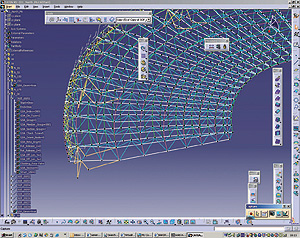 SonyÝs flagship store in Heathrow Terminal Five. Its innovative design has been made possible by the unique communicative abilities of ArchiCAD.

Not instantly recognisable as a shop, the storeÝs design uses elements such as a glass floor and technology trees ¾ 2.1 m high data/power connected stands showcasing the latest mobile phones, computer games and gadgets ± none of which is the norm in the regimented world of airport retail interiors.

ýArchiCADÝs 3D capabilities enabled us to explain to both Sony and British Airports Authority (BAA) that the design would look good and be of no danger to the public in an emergency,¯ says Collinge. ýWe had to show that the stands wouldnÝt block sight lines; that the glass floor could be reconfigured easily; that the space would work visually from all perspectives.¯ AM System UK did this by creating a fly-through in ArchiCAD of the space and its surroundings. The designs were approved on aesthetic grounds and also met all BAA airside security/safety checks.

ýOur concept model, which first sold our ideas to Sony and BAA, went on to become the full store design. Using BIM we are able to evolve the model, modifying and adding to it as the project progressed. At Heathrow it was used at all stages of the design including getting approvals from the airport authority,¯ says Collinge.

ýThis way of working is really beneficial because it enables you to see the link between the design and the finished store. ArchiCAD enables us to create a progressively more detailed model that is the centre of all decisions. It negates redrawing the design following each amendment, cuts out misunderstandings and means that we alleviate problems with the client or planners not knowing what they are getting until it is built.¯

From big to small

In contrast to flagship projects such as the one at Terminal Five, AM System UK also undertakes the design and manufacture of smaller but no less challenging stores such as the 80 sq m Sony Centre in Scotch Hall, Drogheda.

The Scotch Hall store has been widely acclaimed for its innovative design that strays outside of the conventional retail unit layout. ýIt was a particularly challenging site to design a store for,¯ says Collinge.

ýSet against a Grade One listed stone wall and with a 20 m high ceiling, the store is like no other and it was only through using 3D modelling that we could fully explain our concept to Sony, the retailer and the shopping centre manager.

ýAt first people were sceptical but by working through the ArchiCAD model with them, we were able to show how weÝd design around the listed fa?ade and provide the necessary services without running them above a ceiling as is normally the way.

ýAM worked with the client and safety inspectors to design and then amend the 3D model to alleviate fears about things including fire safety and security. We created a fly-through and also interrogated the model to ensure that there were no services clashes. It all worked out perfectly.¯

Concession displays within department stores are a big part of SonyÝs national coverage but they are only small in terms of size. ýWe have to be able to roll them out quickly and cost efficiently,¯ says Morse. 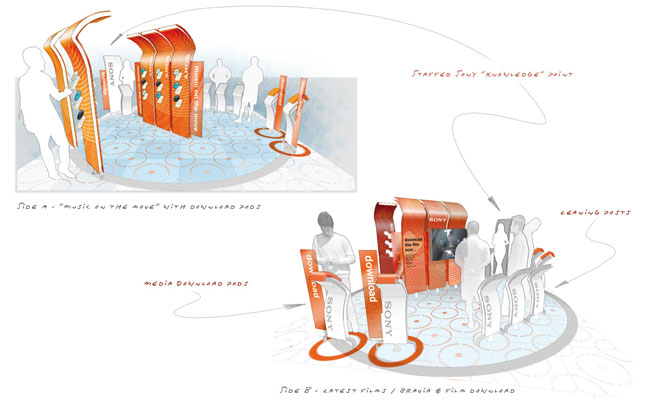 Terminal FiveÝs unique design is based on the idea of a technology garden. BIM was used at all stages of the design, including getting approvals from the airport authority.

ýOur solution is an ArchiCAD conversant sales/design person, who goes to site, surveys, designs and costs a concession on the spot. The clients love it because they can see the process and get to navigate through the model to see the view from the checkout or positioning of stands, for instance. For us, it saves immense amounts of time and often pulls in extra work, as the clients ask us to design other parts of the store.

ýIt is this ability to sit in front of clients or hold on-line design sessions to work through a design that is probably the most important part of ArchiCAD for me. The software is easy to use, the client can understand 3D better than 2D, we can work out problems quickly and easily, the client enjoys the interactivity and the feeling of having input into the design, and, if they want us to experiment with the design we can do it there and then.¯ Collinge says: ýWe arenÝt architects and we donÝt use some of the features of ArchiCAD that they do. However, 3D model-based design is integral to the way we work and our success.

There will always be those in the construction industry who are more comfortable working in 2D but if you want to connect properly with everyone ± clients, planners and sub contractors ± 3D model-based design is definitely the way to go.¯