Moving on from using AutoCAD as an electronic drawing board, Stride Treglown has now embraced 3D and is already looking to a future where all project disciplines produce models in Revit from start to finish. By Richard Mitchell.

Today the firm is one of the top 15 architectural practices in the UK. With nationwide offices in Bristol, London, Plymouth, Cardiff, Truro and Manchester, staff resources in excess of 200 and an ethic of continuous improvement in service and quality, it is easy to see why Stride Treglown is leading the way with its use of Autodesk Revit technology. However the practiceÝs route to Revit starts some twenty years ago.

ýOne of key advantages of using Revit is the early route into 3D. From a starting point we were able to put together a concept in 3D to show to the
client extremely quickly.¯
Bob Whittington, Managing Director, Stride Treglown

In the early 1980s the CAD industry started to blossom and, realising the potential benefits that CAD could bring, Stride Treglown chose to adopt AutoCAD technology. Within a short time a number of significant benefits were noticed which made an enormous difference to the working methods of the company.

Bob Whittington, Managing Director, Stride Treglown, explains, ýAlmost overnight CAD technology transformed the way we worked. We took projects from the drawing board to a computer and realised significant benefits. We were able to complete projects much faster by cutting at least 30 percent of the man-hours from a job, drawings became more accurate and changes could be made more quickly. Not only did it change the way we worked but made us much more competitive.¯

Having utilised AutoCAD for many years with much success, Stride Treglown, being rather visionary, saw the opportunity to move its CAD technology forward. Bob Whittington says, ýFor us, AutoCAD was just an electronic drawing board and what we really wanted was a more effective method of downstreaming data to make better use of our designs.¯

The concept of an industry-specific solution was considered and when the potential benefits were realised, a number of packages including AutodeskÝs Architectural Desktop and Revit (then made by Revit Inc) were explored. Following trials of a number of different solutions, the company decided on purchasing object-based technology and took on Architectural Desktop due to its compatibility with AutoCAD. After adopting ADT with limited success, Stride Treglown concluded that while ADT simply did not meet their requirements, the decision to go for object-based technology was indeed correct. At this point the company looked at purchasing Revit.

ýWhen we were looking for software to replace ADT, Revit was an obvious choice,¯ says Bob Whittington. ýBeing a specific architectural package, it had the ability to draw walls, floors, etc. as opposed to simply drawing line-work. Revit again advanced our design work and got rid of a lot of the normal CAD tasks such as line styles, line type scales, layers etc. It just appeared a much more efficient way of working.¯

Initially, Revit was rolled out to the companyÝs Bristol office – to a mixed reaction. 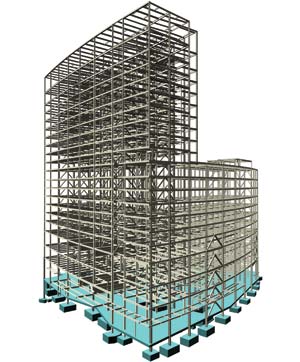 According to Bob, trying to implement Revit was quite tricky at first. ýFrom some parties there was quite a bit of resistance, mainly from those who were AutoCAD users. We had a lot of highly experienced people who felt that by switching to a new package, they would lose their years of AutoCAD knowledge and product understanding and possibly their value to the organisation.

ýOnce we commenced a training programme we found that the transition from AutoCAD to Revit was a reasonably smooth one and that the learning curve was not too steep; so we saw an almost immediate return on our investment. Since its introduction into the organisation we have provided all of the support in-house and with a couple of Revit evangelists really absorbing themselves in the product they have been able to deal with queries and technical issues as and when they have arisen.¯

For Stride Treglown Davies, Revit was first utilised last year when the practice was commissioned to work on the design for the University of WalesÝ Caerleon Campus, within an extremely tight time-scale. They had just six weeks to complete drawings to RIBA Stage D for a ú7m new faculty

ýGiven the tight timescales and the clientsÝ requirements, Revit was essential for this project,¯ says Bob. ýOne of key advantages of using Revit is the early route into 3D. From a starting point we were able to put together a concept in 3D to show to the client extremely quickly; this was better than using a 2D plan which does not always give the best perspective of a concept.¯ 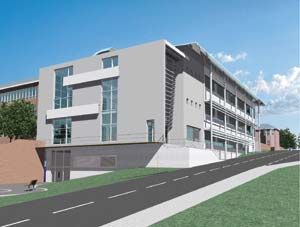 Pierre Wassenaar, a Senior Architect on the project adds, ýWith the Caerleon project, the other main requirement was the necessity to allow the client the ability to walk-through and approve the entire project. The ability to show a 3D model in Revit and give a perspective of the idea early on was absolutely essential to the success of the project.¯

One of the other key benefits Stride Treglown Davies discovered from Revit was the ability to make quick iterations to the design at any stage. According to Pierre, ýOnce we had shown the design to the client there were a number of changes to make to the design, some more significant than others. Within such a short time-scale it was vital to be able to make those changes quickly and illustrate their impact on the design. Using RevitÝs BIM (Building Information Modelling) technology we were able to make changes quickly and all elements of the design updated. We were even able to make changes live in Revit in front of the client!¯

Stride Treglown Davies also found that Revit held a number of other advantages during the project. When creating the model, components of the design were split into two categories. Where the practice perceived that a component was only relevant to the project an in-place family was created within the model. Where it was perceived that at some point in the future a component might be used again on other projects, time was spent creating component families which could be added to RevitÝs catalogues and used in the future. 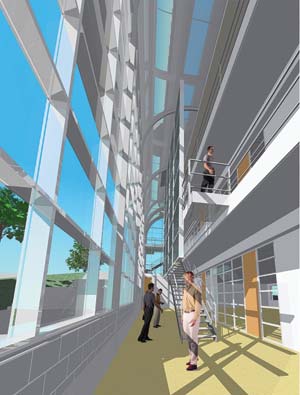 One significant advantage Stride Treglown Davies discovered from using Revit as opposed to Architectural Desktop or even AutoCAD was its site survey tools. By utilising these, site survey data was used to accurately position the model and even add features such as roads to complement the design.

ýUsing RevitÝs site survey tools we were able to receive survey data from the surveyor, import this as an AutoCAD DWG and then revise our model accordingly,¯ says Pierre. ýAs the surveyor carried out more work, iterations to his data occurred, which ordinarily would have caused us potential problems. However, with Revit we were simply able to overwrite the original DWG and update the model. We have found that Revit has become the driver for accuracy in terms of site positioning against survey data. Not only site positioning but on the Caerleon project we used the data and Revit to place roads and pavements.¯

But Revit does not have the ability to draw roads, does it? One of the key factors to Stride Treglown DaviesÝs success with Revit has been the firmÝs ability to innovate and think about things in a more creative way. Pierre explains, ýWhere we needed to illustrate roads and pavements we used the Ùfloor slabsÝ tool to build roads and pavements and inverted the slab edges to create kerbs. Whilst not necessarily a true representation of the roads it did allow us to give an even better perspective of the model to the client.¯ Having seen the continued benefit of Revit technology, Stride Treglown Davies is now looking for ways to push forward its work in Revit.

Bob Whittington says, ýAt the moment we probably have over a twenty projects running live in Revit across all our offices. We see Revit as a real advance in CAD. What we as a company would like to aim for is producing a whole project from start to finish in Revit, where all elements of the team are using the same platform; from us, the architects, right through to the surveyors, structural engineers and building services engineers. We are already looking at the benefits Revit Structure could bring to the organisation and with Revit Systems (Revit technology for building services engineers) to follow weÝre positive in the near future that aim may well be achieved. At the moment we are also looking for potential business partners utilising Revit Structure technology because we really do believe this is the way forward.¯

Russ Monrose, Corporate Account Manager of Excitech concludes, ýThe correct deployment and development of a new piece of technology like Revit is critical to the success of the Practice using it and also of the software. ýWe have seen many practices slip back to the days of ýelectronic drawing boards¯ and then in the face of economic and business forces regret that they had not taken a more pragmatic course of action with the planning and deployment of that software.

ýStride Treglown has shown that with proper planning and determination the company is able to make significant savings in labour and therefore become more competitive in todayÝs lean construction industry market place. ýAs for ExcitechÝs role we are pleased to be able to support Stride Treglown, work with them, learn with them and develop the business processes that contribute to that success and hopefully be able to pass this on to all of our clients.