Join us for AEC Magazine’s live coverage from Autodesk University in Las Vegas.

Welcome to our live blog from the opening day of Autodesk University 2015, the software giant’s user event for its vast portfolio of design tools.

There are more nationalities milling the halls than your average airport international arrivals lounge – and the scale of the event is greater than anything else I’ve ever attended, which is a reflection of the software being covered here: product design, engineering, architecture, construction, plus a smidgen of stuff for the visual effects markets – it’s busy.

We’ll be bringing you all the action below the line, so stick with us throughout the day.

10.20 – The cavernous general session is about to begin – the theme seems to be ‘giant green warehouse rave’ complete with live DJ, blazing light show, and a mini centre podium, onto which we expect to be seeing Autodesk CEO Carl Bass throwing shapes and waving glowsticks in a short while. 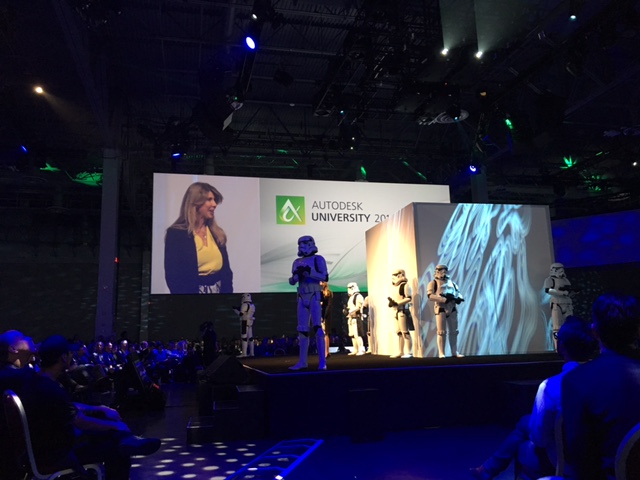 10.40 – Carl Bass is here with his keynote talk – ‘focusing on what’s really important, and the really talented people I’ve met’ 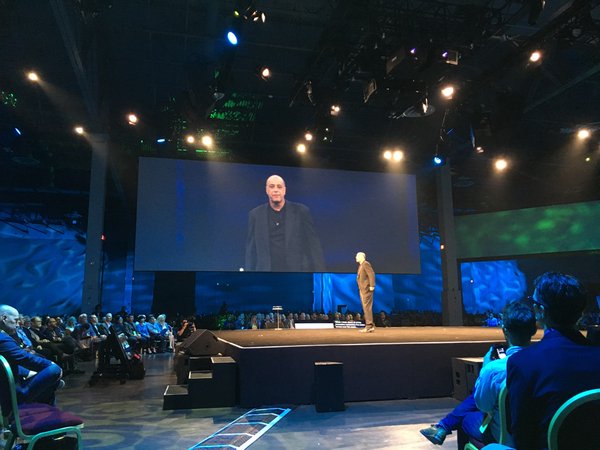 10.42 – ‘Innovation… it’s a combination of pragmatic improvements and combining the with new things, and the often unsexy work of packaging it up’

10:44 – Bass is back from visiting the new 3 million sq ft Apple HQ in construction in Cupertino. ‘An awesome experience.’ Construction of the building is using prefab concrete panels: ‘The engineers were talking about them like they were aircraft parts. Building and manufacturing are converging.’

10.49 – Bass, in his natural habitat of his workshop, started looking for a makeshift, automated IoT solution for fixing his knackered CNC machine from the sound it was making. There a professional solution that works in the same way – by collecting, analysing and taking the appropriate action on their own.

10.52 – The future of work – Bass doesn’t think jobs will disappear in the engineering sector, but getting the right people trained is going to be a big problem. Having visited Facebook’s offices, he suggests that they have snack machines and social areas (bars!) might not be the best way to get the best workers doing meaningful work.

Autodesk’s interns have been doing some ridiculous projects this summer – something suggests that they’re getting the right balance. ‘Creating a business and a mission that makes the right people want to work for us’.

11.00 – Andy McAfee from MIT is now onstage – asking the question ‘what are the most important historic points in human history?’ At a dinner party, this is going to have everyone debating. I don’t get invited to many dinner parties… sad times…

He’s right when he says ‘technology is the key’ over everything else. 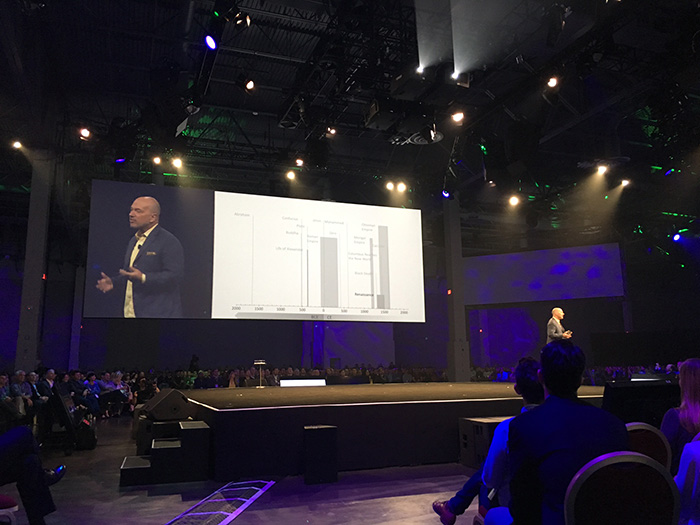 ‘We continue to underestimate good old fashioned innovation… when wood becomes really expensive because we’ve used it all, we turn to other materials… Innovating our way out of problems’

It’s not all good – as we still continue to burn through natural resources – but with dematerialisation, we’re getting better. Computerisation is helping us use fewer resources (we’ve already passed peak material use). Interesting stuff.

‘Around the world we’re giving more land back to nature every year.’

We’ve two big challenges still to face – stop cooking the planet, and how wages need to rise – ‘I’m not a communist’

11.16 – CTO Jeff Kowalski is on stage, wearing a lovely wine coloured jumper and telling us how we’re moving into an Augmented Age – and it’s going to radically alter the way we think, work and exist.

Autodesk has been working with Airbus – busy developing the technology techniques for its 2050 concept.

A world first look at the new ‘Bionic Partition’, an onboard wall, that weighs less than half the standard weight, saving 25kg for each one installed, and is even stronger than the old model.

New levels of product to be designed – intuitive and empathic – instead of us learning a CAD tool, Kowalski expects the future to be CAD tools that learn us.

Currently Autodesk are working on getting a robot in their lab to understand simple voice commands and gestures to complete manual tasks – no CAD or CAM, but he’s drilling shapes in walls .

11.29 – Dr Hugh Herr from MIT – ‘I’m in the transport industry: I design legs for a living’. He lost his biological legs in 1982 from frostbite when mountaineering, so designed some new ones. Top lad!

He now climbs at a better standard than he did previously because of his bionic limbs.

Developing new mechanical and electrical interfaces that means one day we’re all have bionic technology inside us.

The future human will ‘sculpt’ their body – designing their very human body. ‘The designer will design themselves’. 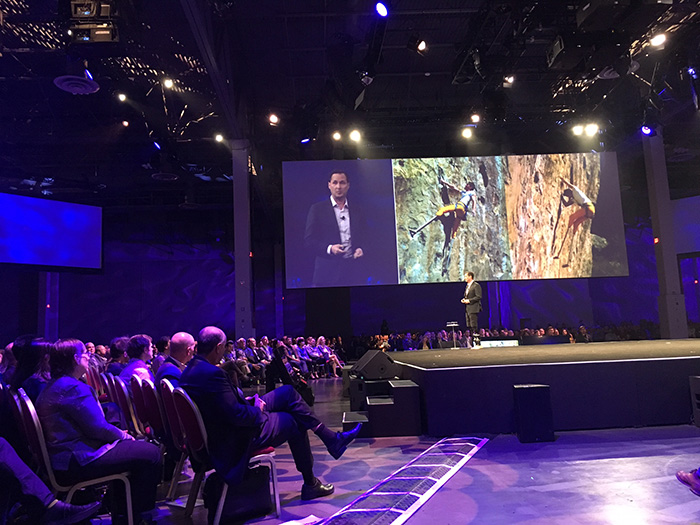 ‘Take technology away from me and I’m crippled. With it, I’m free’ – incredible stuff.

11.38 – Jeff’s back on stage, looking at getting smart technology working smarter as part of a ‘nervous system’ of technology. ‘As designers we can learn from web designers – an entire site is regimented down to the pixel’

Autodesk have been working with the Bandito Brothers (life-size Hot Wheels tracks) to design a car with a nervous system – it’s the future! ‘Technology isn’t going to replace us, it’s going to help us design better things!’

And with that, it’s lunchtime! Back in a flash folks!

The afternoon session is underway with a little less bombast than the morning, but there should be interesting stories galore as we look at some of the most innovative projects using Autodesk technology.

15.00 – Dennin Oosterman from ReDeTec3D is showing off his Protocycler – a 3D Printing filament recycler.

15.25 – The entirely electric city might be the next big shift in humanity, says BIM specialist Michael Thydell. A flexible infrastructure doesn’t come without it’s problems, and adding sensors to all aspects of buildings to collect realtime data might be the answer.

Using as much data as possible means designers – in this case architects – can create better products.

15.36 – John Jacobs, who ran on stage and shouted his bit so fast I didn’t hear a word of what he said, has now ran off stage and a video is playing about some architects designing a concert hall. I think he’s from construction firm JE Dunn, and it’s about allowing collaborative working with Revit. The video is full of bad acting, although the key message is nice.

JJ is back on stage, explaining how they can cut months off schedules through getting their teams to work together better, and how costings estimates can be much closer to the end figure right at the start of the project. They use a tool called LENS to provide a costing from whatever details are available at the start – even napkin sketches – and apparently get within five per cent of the final costs.

15.55 – More architectural content – this time from engineers, Dewberry, and Downtown inc who are looking at population growth and global warming (think rising water levels, floods, and sustainable cities of the future).

Downtown Inc are a Washington DC company, and they’re rather proud that they’re building a very sustainable future for the city, today. Although to be truly sustainable it needs to be smart, so they’re looking into using as much data as possible and analysing it in realtime. They’re using Infoworks 360 to develop a rapid energy model on a district model – helping inform energy plans and grid modernisation.