For the redevelopment of WakefieldÝs old market quarter FABSECÝs FBEAM has not only helped generate optimum cellular beam designs, but will prove invaluable when it comes to fabrication and site installation says Leeds-based BWB Consulting.

The Trinity Walk project in Wakefield is a prestigious joint venture by Modus & Simons to redevelop the old market quarter in the town centre. The schemeÝs construction schedule gets underway this summer and is due to be completed in spring 2010. A mixed use development, it will comprise circa 600,000 sq ft of retail space over three floors configured around a central ÙmallÝ type pedestrian walkway.

The design also includes 72 residential apartments located above the retail space, a new library for the local authority, a leisure unit and 960 associated car parking spaces.

For the structural engineers appointed to carry out the design, Leeds-based BWB Consulting, retained by Simons Developments, simplifying site installation was one of the challenges of the project that they believe using FabsecÝs FBEAM software helped them overcome.

James Knight, engineer at BWB says: ýFBEAM designed all the plate girders for us and allowed us to rationalise them which has reduced the total amount of different FABSEC designs, which will help overcome any confusion when it comes around to fabrication and site installation.¯

The latest version of FBEAM launched in September 2006, and James has been using the third-generation steel beam design software from Fabsec since January to take advantage of the programÝs significant new features and capabilities.

FBEAM provides a new project capability to manage all the beams on a project collectively. The group analysis, optimise and edit function permits the rapid design and modification of multiple beams.

Knight claims one of FBEAMÝs key functional benefits is the speed achieved when using the softwareÝs Beam Wizard function. ýBy using the beam optimiser along with the option to use common beam properties for similar beams, we have saved valuable time.¯

FBEAM has also pioneered a comprehensive two-way link to the RAM frame analysis package. The link is the first of its kind for Fabsec and transforms the speed and time needed to complete frame analysis as beam data does not have to be manually transferred on a beam by beam basis.

Designers can analyse the building frame with the RAM software and export groups of beams to FBEAM for simultaneous production of optimum (cellular) beam designs. Optimised beams can then be saved back to the RAM model along with any web opening details, consequently resulting in major design time saving and removing the possibility of data entry errors for multiple beam designs.

Beam data is transferred instantly to RAM and the whole project can be optimised using FBEAMÝs Beam Wizard function in a single step.

James Knight adds that the process saves hours of painstaking information transfer and, if design changes occur then revisions can be quickly achieved. ýIf we were to do this even half manually, 435 beams would have taken weeks rather than hours to optimise and rationalise.¯ 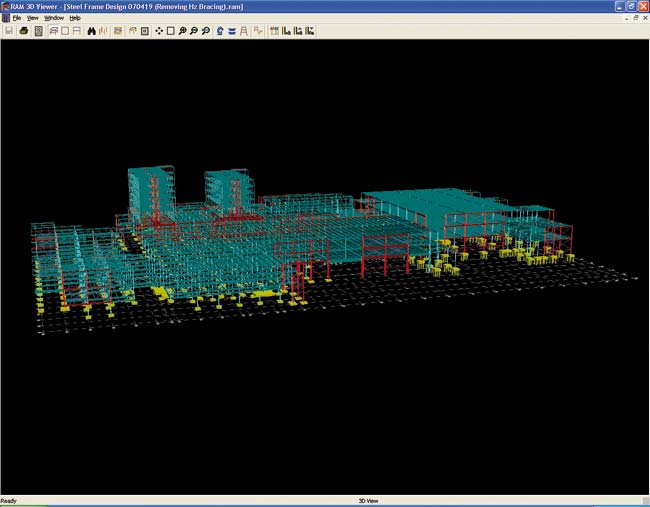 The team at BWB has used the RAM link throughout the project allowing them to update, revise and re-link the project efficiently.

ýThe link has allowed us to re-assess the impact of any layout or loading revisions on the Fabsec beams almost immediately,¯ Knight adds.

ýWe have used FABSEC beams for quite a few transfer structures in locations where headroom has been critical. Therefore by limiting the depth of the beam in the optimiser FBEAM has been able to provide us with a shallow yet adequate beam which a standard UB wouldnÝt have been able to.¯

The software proves particularly useful on steel-framed buildings which are made up of a lot of wide spans that require steel to be fabricated to exact specifications, rather than using standard sections. Most of the beams in the Trinity Walk project have been specified as floor beams, James explains: ýWe have a reasonably rectangular grid and coupled with the sheer size of the building we believed that FBEAM would be able to span the distance with a lighter beam than a standard UB of the same depth.¯

Fabsec designs are used typically for primary and secondary floor beams and rafters and are used in many sectors of construction including offices, car parks, hospitals, retail and leisure.

One of the most advantageous benefits of using steel in the design of large scale developments, particularly those which involve retail units, is that it allows for changes to be made later down the line, so if a new tenant comes on to the scheme and should like a different floor plan or escalator, modifications are efficiently and easily achieved.

Trinity Walk will soon start to take shape and the team at BWB have been able to satisfy the specifications of tenants and easily redesign units as required. Soon, shoppers in West Yorkshire will be able to see the results for themselves.