With updated versions of AEC tools now available, and more features coming in the Autumn for subscription customers, Martyn Day takes a look at what’s new from Autodesk.

Autodesk Raytracer is now the default visualization engine in Revit 2017

The announcement of AEC updates from Autodesk comes around each year like clockwork for customers — but the year ahead looks set to be one of momentous change. From 31 July, Autodesk will go subscription-only for new seats and suites, in a decisive and swifter-than-expected shift away from a more traditional business model based on selling perpetual licenses.

The impact will be felt by everyone in the Autodesk ecosystem – its customers, its resellers and third-party developers.

What’s clear is that customers who have previously purchased perpetual licenses for Autodesk software will continue to own and have full usage rights for those products. If they’re still tied into maintenance contracts, they’ll continue to get software updates and other benefits, for as long as they continue to renew. No limits will be imposed on how long they can keep renewing.

For others, the picture is more mixed. For new customers and start-up companies, it’s good news, because accessing professional CAD tools will no longer involve the hefty capital expense hit associated with forking out lump sums for perpetual licenses.

Longstanding Autodesk customers, however, face the prospect of paying more for subscriptions over a three to four-year period than they would previously have done for perpetual licenses and regular upgrades. To cushion the blow, Autodesk is promising more frequent updates throughout the year, along with access to new online services. And it’s hoping to make the proposition more attractive still with Autodesk Suites, which offer broader collections of Autodesk products for relatively low subscription fees.

Either way, it’s happening: subscriptions make good business sense for Autodesk, just as they have done for Adobe. The company may take a short-term revenue hit as those big lump sums for perpetual licenses dry up, but subscriptions mean a more regular flow of revenues, plus increased cost of ownership for users over the longer term, the result of which should make itself felt on the company’s books in three to four years’ time.

There are carrots here, as well as sticks. With its move to subscription-only fulfillment for new seats, Autodesk has realised that introducing updates that break end-user customisations on upgrade are not a great idea and its executives have conceded that file-format changes are a nightmare for customers.

The company now recognises that subscription is more about providing a continuum of improvements, rather than big dollops of new but hard-to-digest functionality. There’s a definite impetus to smooth the upgrade process and maintain ongoing compatibility, which actually benefits the AEC industry as the work it does becomes more collaborative.

Executives at the company also highlight the added flexibility of subscriptions, in that users can access current or earlier versions at home or at work, be sure they’ve got the latest version when they need it and be set up for single or multi-user (shared) access. Another potential benefit is that software licenses can be better managed by customers according to the budgetary and other economic constraints that they face – although it might equally be argued that other software companies with subscription policies don’t always make it easy for customers to exit subscriptions or retire licenses.

In other words, should there be another economic crunch, it will be interesting to see how easily customers can divest themselves of subscriptions if staffing levels fall. (Obviously, I hope we don’t see another debt bubble implode. Once in a lifetime was more than enough, thank you.)

The first major change for AEC customers coming down the line from Autodesk is that Revit is now a single product. Its architecture, structural and MEP elements have been combined, so everyone gets everything and the distinction of disciplines is no longer an issue.

For customers not yet on subscription, Revit 2017 features all of the updates included with the 2016 R2 releases of October 2015, details of which can be found here (tinyurl.com/z3eplko). This was a significant release in terms of Revit performance, which will be one of the big instant benefits of upgrading.

Revit 2017 has been the focus of over 200 improvements. Since these touch many commonly used functions, this update should prove popular with expert users.

In visualisation, depth cueing allows enhanced visualisation of elevation and section views, using a lighting gradient to indicate which elements are furthest away and which are closest to the front of the view.

The ability to view or hide selected point cloud regions has been improved, so scan regions can be selected and hidden in each view, which ultimately helps performance.

Autodesk Raytracer is now used for all rendering functions, so users no longer need to select a rendering engine. This is a high-quality and exceptionally fast physical rendering engine, introduced in last year’s release and capable of using more than 16 CPU cores for processing.

Energy Analysis has been simplified, too: users only need to enter in the location of the model and the system will intelligently determine the rest of the default settings, to achieve optimal results with minimal input. For more advanced Energy Analysis, the Advanced Energy Setting dialogue offers all the parameters that were formerly found in the Energy Settings dialogue, with a bit of renaming. The export to gbXML tool can now export the energy analytical model created using the built-in energy settings or the model using volumes based on rooms or spaces. 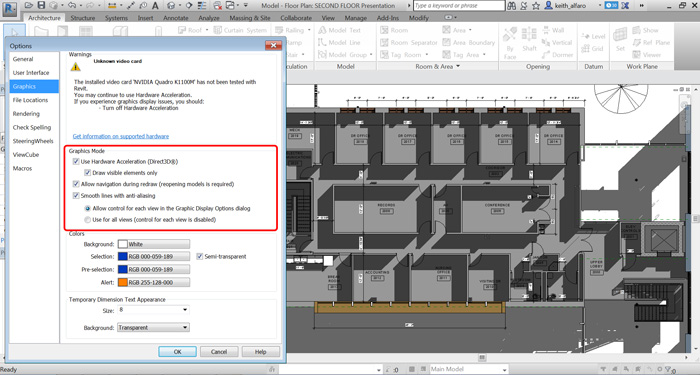 Railings: These can now be sketched on top of faces of floors, slabs, slab edges, walls and roofs. Balusters and railings adjust to the slope of irregular surfaces.

Display of walls: To improve the system regardless of detail level assigned to a view, Revit regenerates walls only for those visible in the drawing area.

FormIt 360 Converter: This converts FormIt 360 files for use with Revit, and vice versa.

In-place elements: Users can now create an in-place stair element in the context of a model.

Dynamo: This is a graphical programming interface, similar to McNeel Grasshopper for Rhino, that lets you customise your building information workflow. It is now available as part of the Revit installation.

A360 Collaboration for Revit: This is now installed with Revit.

There are also a host of updates and enhancements to Revit’s existing text, schedules, user interface, workflow and collaboration tools. 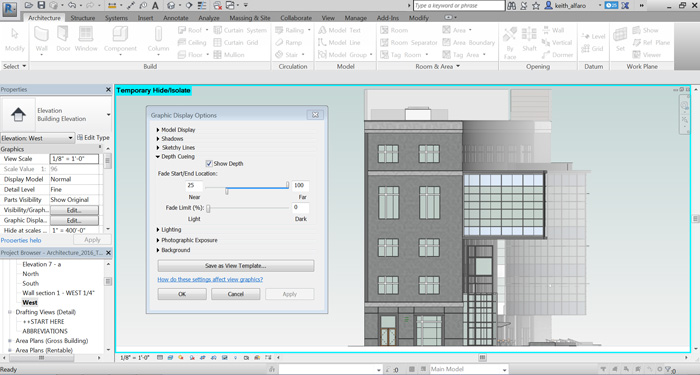 Autodesk launched the Structural Fabrication suite last year. This includes Revit, AutoCAD, Advance Steel and Navisworks and aims to connect up engineering and construction by bundling tools for design, detailing and fabrication.

Revit has always been strong in structural design and engineering, while the AutoCAD-based Advance Steel (a product Autodesk acquired from French structural software developer Graitec in 2013) is better tuned for fabrication (drawings, bills of materials (BOMs) and CNC). Navisworks Simulate adds estimation, co-ordination and construction simulation of steel projects.

In the past, Autodesk has been criticised for poor interoperability between key products within its suites. The good news is that the company is already addressing this for the Fabrication Suite with the ability to synchronise not just the structure but also the fully parametric steel connections between Revit and Advance Steel.

The new Steel Connections for Revit extension also enables Revit 2017 users to model connections with a higher level of detail, including a built-in steel connection design engine based on US and European codes. As a result, this looks to be an important step in streamlining design-to-fabrication workflows.

Most of the other highlighted developments this year centre on Advance Steel 2017, with new connections and profiles for international suppliers; new user-defined formulas for BOMs; new automatic and parametric tools for inserting cold rolled sections; more tools for cleaner documentation; and options to manage fabrication status data. Interoperability has also been improved with vanilla AutoCAD, thanks to an object enabler that allows users to open Advance Steel 2D drawings in AutoCAD 2017 and AutoCAD LT 2017. 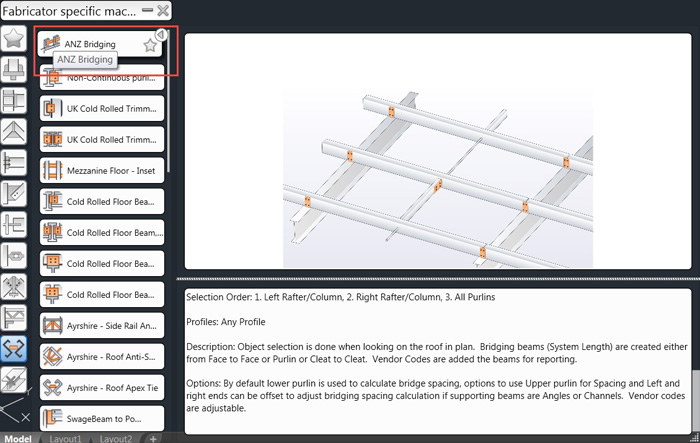 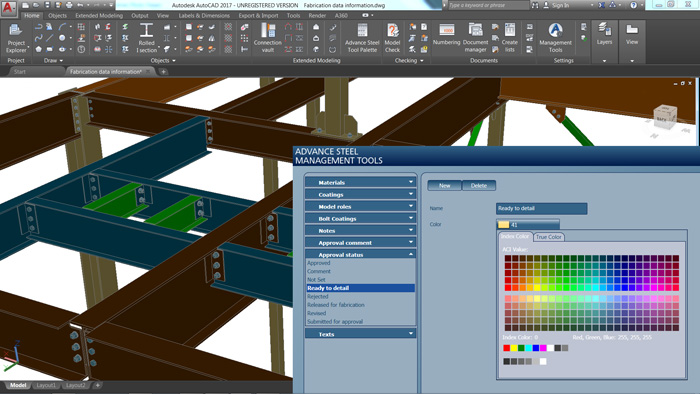 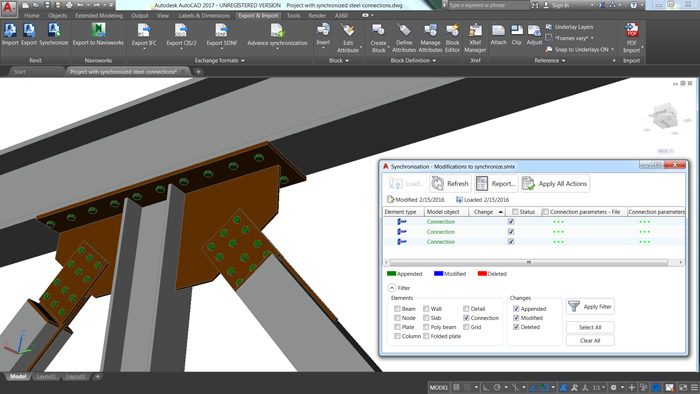 Interoperability is improving in the Structural Fabrication Suite: users can now synchronise steel connections between models created in Revit and/or Advance Steel, while keeping them as intelligent parametric connections

Looking at the range of AEC applications as a whole, it’s clear to see that InfraWorks 360 is the product boasting the greatest development velocity. Every year, Autodesk adds impressively big chunks of additional capability to what started out as a conceptual civils tool, and in the process, is creating something that will potentially replace the AutoCAD-based Civil3D detailing application.

The major update here has focused on simulation capabilities, enabling InfraWorks 360 to be much more useful in the conceptual phase of a process. As well as supporting the analysis of more complex road conditions, the system has been expanded beyond the simulation of vehicles to include pedestrians and public transport. When combined with stunning graphics pulled from real-world GIS, 2D drawings, OSM maps, raster images and satellite data, InfraWorks can provide traffic simulation that blows SimCity out of the water. With the user almost in ‘God mode’, they can get really useful data out of the system.

This release at last provides InfraWorks with much better interoperability with Revit and Civil 3D. In fact, it appears to work better with Revit now than Civil3D does. So much detail can be pulled across to InfraWorks, in fact, that it almost rivals Navisworks as a viewing option. 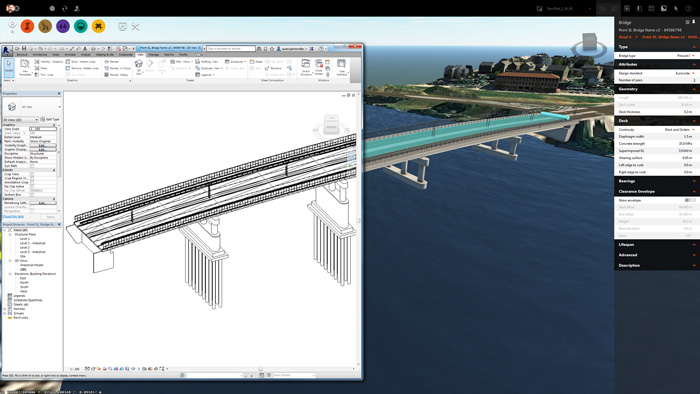 Workflows between InfraWorks 360, Civil 3D, and Revit have been enhanced. Shown here is InfraWorks 360 model imported directly into Revit 2017 for detailed design work 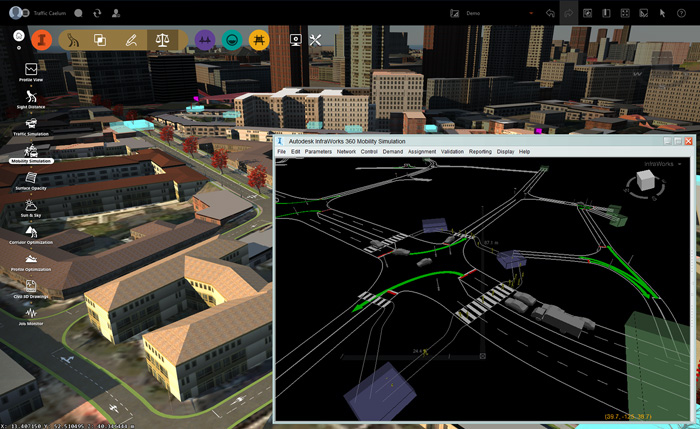 Among a number of enhancements to its desktop coordination application, and its ability to work with Revit and more notably Recap (which has seen a drastic price reduction recently), Autodesk has taken this release to integrate Navisworks with its cloud-based equivalent, BIM 360 Glue. As a result, views created in Navisworks can now be shared with teams working in BIM 360 Glue. The displays look alike and share model elements such as transparency and section planes.

Still going strong, 2D giant AutoCAD and its sibling LT roll ever onward. This year’s updates include the ability to import geometry, TrueType fonts and raster images from PDF files.

There are also improvements to Smart Centrelines/Centre Mark creation, with new options for associative editing of these.

The new Autodesk Desktop App replaces Autodesk Application Manager, seamlessly delivering product updates and learning content in a subscription-aware one-stop shop. The idea here is that security patches and updates can be delivered for all 2015, 2016 and 2017 versions of Microsoft Windows-based Autodesk products without disrupting workflow.

Autodesk watched from the sidelines with admiration as Adobe pulled off its own move to subscription-based pricing. That transition wasn’t without its problems: Adobe stumbled at first, upsetting many customers with the sheer abruptness of the move and its pricing mechanisms, but soon recovered.

So it’s no surprise that Autodesk hopes to emulate the positive elements of that shift – but with so many historical products and different interfaces, the Building Design Suite runs the risk of being seen as a bunch of ‘islands’, lacking Adobe’s level of convergence in user interface and data formats. There is still much work to be done.

In its favour, Autodesk now has a formidable range of AEC applications. The most concentrated development effort seems to be focused on Infraworks 360 (and civils in general), the new 360 collaboration tools and Revit. A recent price drop for Recap, meanwhile, would seem to indicate that Autodesk is trying brute force to take market share in the surveying and reality-capture market. With Formit and Dynamo, it’s still working on the conceptual phase of the problem.

So there are still unknowns in what was once a far more predictable upgrade cycle – but customers can expect further updates from Autodesk’s AEC team in September and October this year.