For this year’s Key Customer Conference and launch of ArchiCAD 23, Graphisoft opted to hold it in Las Vegas, the first time in the USA, and very apt as the company’s new CEO, Huw Roberts is from Philadelphia

At times it seems as though the whole design technology development and investment world is focussed on the changes that are currently underway in the Architecture, Engineering and Construction sector. The industry is well on its way to transitioning to adopting BIM as the standard process for modelling to deliver co-ordinated drawings and now it’s in the early phases of evolving ways to digitally fabricate components and buildings off-site. Revolution is in the air.

We are also seeing this in the broad array of software tools that design and construction professionals are deploying to get their job done. Twenty years ago, most architects would have had a sea of AutoCADs; now it’s Revit, Rhino, SketchUp, Unity, Grasshopper, Dynamo, Tekla Structures, MicroStation, Unreal, Enscape, Vectorworks, Catia, Maya and ArchiCAD to name but a few. As the design process (and now the fabrication processes) change, firms need to refine their workflows and build new product stacks to address new design challenges. Nemetschek, the owner of ArchiCAD developer Graphisoft, is responding to this through acquisition, rapid development and better sharing of technology between its ‘brands’.

The Las Vegas KCC was an opportunity to introduce Graphisoft’s new CEO, Huw Roberts to the company’s global audience and to unveil a slightly more aggressive stance to promoting itself in the BIM market, especially as it opens up with all these firms evaluating new workflows. Roberts proudly still holds his US Architect’s licence and has formerly held VP and CMO roles at Bentley Systems and BlueCielo respectively. He is the second American to head up Graphisoft, the first being Dominic Gallello, formerly of Autodesk, from 2003 to 2009.

The Nemetschek Group now has 16 brands covering various niches in the design and construction market with 5 million customers. Some brands overlap, like Graphisoft, Allplan and Vectorworks, which frequently compete for the same clients. Others are unique and have pretty much got categories to themselves, such as Solibri for model checking.

Former CEO of Graphisoft, Viktor Várkonyi is now Chief Division Officer, Planning & Design Division. He gave a description of the group’s outlook on the market. Várkonyi is responsible for the division’s global strategic alignment as well as for positioning the Nemetschek Group in the BIM market as a leading provider for connected end-to-end AEC workflows. The net result of this move has been a more coordinated approach in sharing technology and more promotion of key brands.

Every year, Graphisoft delivers a healthy set of new features and has taken to the wholesale rewriting of core functions to keep the code fresh. It helps maintain the feeling that ArchiCAD has development velocity and quite frankly puts the rest of the industry to shame.

The reason for this is that Nemetschek, for all the positives and negatives, has kept its brands separated and fairly siloed. This means that Graphisoft can focus on delivering a single product to the AEC market. And while you can subscribe, it’s not mandated and upgrading is the decision of the customer, not the software developer. So, every year, the Graphisoft developers have to deliver content that is deemed of value for continued maintenance payment by its customers. Having seen what happens to product development when mandated subscription is brought into play by its competitors, Graphisoft is clearly setting its business offer apart.

This year’s update focuses on revamped column and beam tools as well as voids, niches and recesses. The structural columns and beams tool allows for the generation of detailed complex, even curved, pre-cast concrete, steel and laminated timber structures. The new void commands make it particularly quick to punch multiple holes in building components for MEP geometry. 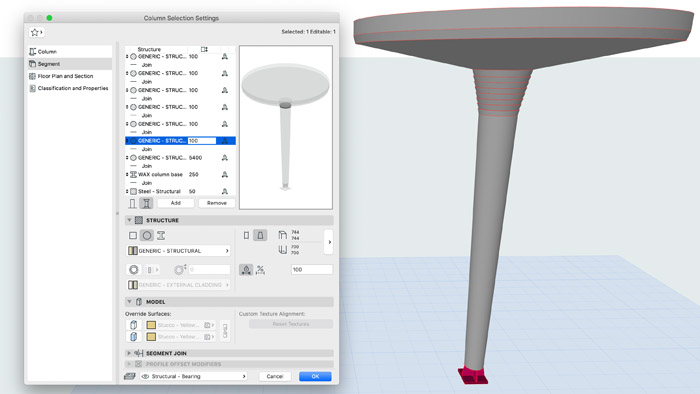 System performance has been addressed in opening files, quick previews while hovering over tabbed views and instant view when changing views. BIM Cloud projects have also been accelerated. With regard to project size, Graphisoft has overcome the memory limitations of mobile machines by streaming data to BIMx on tablets, enabling incremental loading of huge models, as demonstrated with one comprising 50 million polygons.

Graphisoft is unique in its partnership with McNeel, the creator of Rhino and Grasshopper, linking Grasshopper to ArchiCAD’s BIM components. With each release the integration goes deeper. In ArchiCAD 23 there is a new workflow which Graphisoft calls deconstruct, enabling data to flow easily in both directions so ArchiCAD geometry can be analysed in Rhino using its ecosystem of third-party applications.

On the viz and rendering side, there is the inclusion of a new Cinerender engine and Graphisoft has formed a strategic relationship with Epic Games, developer of Unreal Engine, to drive real-time rendering and VR with its recently acquired Twinmotion product.

Twinmotion is an AEC-specific rendering tool that rapidly speeds up the creation of interior and city environments via an easy to use UI and a huge library of render-ready components.

Epic Games is giving away the current version of Twinmotion for free until November 2019. However, as a major bonus to ArchiCAD 23 customers, they automatically get access to the next generation of Twinmotion as well.

Historically, Graphisoft has been somewhat cautious when working with third-party companies, as in this industry many just get bought up by the main competitor. However, under new CEO Huw Roberts, there appears to be a new drive to connect and work with aligned firms. Epic Games is certainly a good friend to have and the benefit from this initial deal is all ArchiCAD’s customers.

The new features and product launch demonstrations of ArchiCAD 23 in Las Vegas can be seen here.

Graphisoft’s KCC is only partially about the new release. The three days of conference includes many presentations of projects from customers and usually features a keynote talk from the architect who designed the building that appears on the box of the new ArchiCAD release.

This year’s amazing image is from PRIDE and is of a gymnastics centre project in Moscow, Russia, which has a roof inspired by the flow of a ribbon.

In fact, many customers presentations have been uploaded to Graphisoft’s YouTube channel.

One of the key technologies that KCC attendees got to see was a highly secretive development which goes under the codename of ‘Everest’, a sort of common data environment. From a company that bleeds ‘OpenBIM’, you can imagine that the intention is to provide a tool to get rid some of the huge data interoperability barriers that the federated AEC BIM process currently produces.

Everest’s primary function is to enable the coordination and dynamic sharing of multiple data sources, programs, disciplines, using a single data exchange environment. Everest is either a server or cloud-based solution that shares common elements between a plethora of BIM tools (grids, structures, spaces, voids, clearances, ports), without the need to import and translate other incompatible native formatted data.

It’s still early days for Everest and it will be one of those types of technologies we will increasingly see from all the vendors as they try and crack the key problem of poor interoperability which came from the many proprietary BIM tools that IFC never truly fixed. Most large firms have data wranglers whose sole aim is to get the right data in the right format to teams at the right time. In many ways, we are getting closer to having that original utopian dream of the single building model, even though we are hamstrung by federated project structures, ‘BIM sans Frontieres’.

When collaboration is no longer hard, firms will feel freer to use the software tools of their choice.

For a very long period of time, Nemetschek was just a collection of brands, but now the company is forging a new path. With a coherent top-down management strategy, an eye to acquiring innovative companies, and proper oversight and sharing of its portfolio of technologies, the company is becoming a serious global contender. The presence of so many new and significant global architecture firms at the event is also a sign that there is a period of re-evaluation going on, looking to augment or move away from a pure Revit-based workflow, or at least deploy the combination of ArchiCAD with Grasshopper as an early stage, BIM-driven, computational concept modeller.

While there wasn’t a lot of discussion of digital pre-fabrication and connecting BIM to production, the trend was mentioned multiple times on stage and in talks with key company representatives, it was clear that strategy and partnerships with digital construction firms were being explored, although perhaps with a more European outlook as to the material choices, over straight mass timber. 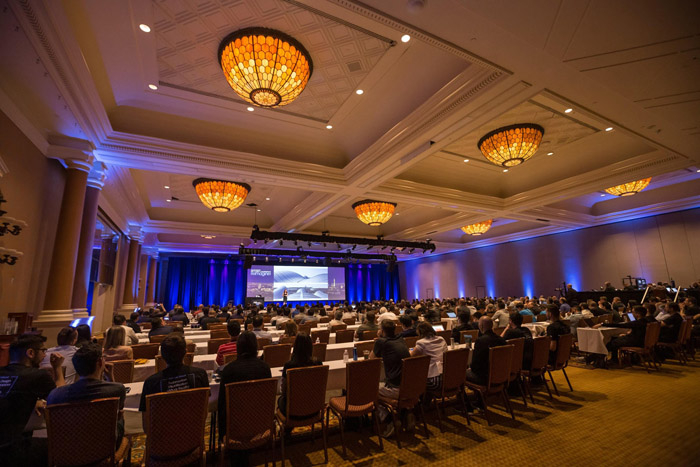