Bentley Systems hosted a two day event in Manchester to focus on its early access program for the Connect Edition of products, which share the MicroStation common environment. By Martyn Day

Bentley has two great strengths. The first is its ecosystem — no other design developer has the breadth of applications across AEC, Plant, and Infrastructure (Civil), with all the management and ‘glue’ in place to bring project teams together. The second is the MicroStation platform, which is a consistent platform throughout the product range and rarely changes its DGN file format. In fact only twice in the company’s history, which started in 1984. This has not impacted development and the latest release remains true to form.

The Bentley Systems pitch is a holistic one and suits large firms that are seeking a one stop shop for design tools and project backbone.

Beyond MicroStation, ProjectWise is probably the company’s biggest brand in the industry, having been used on many high-profile projects, such as London’s CrossRail and Olympic Park.

However, there are many other products and technologies that do not get as much press. The company pretty much has a solution for every major and minor infrastructure design vertical, from mapping, to modeling buildings, roads, mines, plant and rail.

With so many products, the firm offers enterprise licensing so customers can use whatever solutions they need and through online training can provide expertise to apply it. Because most of the applications are based on MicroStation, the core interface is the same and all the data can be managed through ProjectWise, again a consistent interface for project documentation.

The latest generation of MicroStation-based platform products are called the Connect Edition, taking over from the previous generation V8i. Bentley has dabbled with Microsoft naming conventions (95) to straight versioning over the years, this represents a break from all previous branding.

The Connect Edition has already been made available to early access participants, and the rest of the Connect offerings will be released throughout 2015 and 2016. The good news is that the current generation of solutions (V8i) will work happily with the new Bentley tools, so transitioning to the latest generation should be fairly seamless. ProjectWise Connect Edition services, along with the Bentley Navigator Connect Edition application, will be available for Early Access by year’s end.

The core premise of the Connect Edition is to enable a project-centric hybrid environment across desktop, cloud, project-server and mobile. To enable this, Bentley has utilised Microsoft’s Azure cloud-service to connect all users across projects. Azure also provides a computational backbone to provide lightning fast analysis and ‘optioneering’, for computationally refined designs and ultimately improved performance of designed assets. Azure also is the platform for Connect Select Services and Select Open Access, through quarterly term licensing.

Each user of the Connect Edition gets what has been called a Bentley Playlist of applications and apps, which are specific to their project role within projects, including access to structured learning tools and ‘just-in-time’ recommendations. Projects also have project-specific ‘Bentley Playbook’ with appropriate applications and apps to fully address the project’s requirements and to support each participant’s role.

These project-specific workspaces can include cloud-provisioned software or content, such as catalogs of what Bentley calls ‘functional components’ and specifications.

Functional Components are a new capability unleashed with MicroStation Connect and comes with a suite of constraint tools that allow users to capture design intent and create parametric ‘functional components’ for use in designs. The new ProjectWise Catalog Service provides a way to manage and distribute these in house components to all project participants via the cloud.

A Bentley Connections Passport provides authenticated access to ProjectWise and AssetWise services and software spanning a user’s hybrid computing environment. For example, the Bentley Navigator Connect Edition provides a user with the same immersive “hands-on” interface across Windows, Android, and iOS, wherever they are.

Documentation Center is a new capability that allows team members to aggregate, publish and share, consistent and combined deliverables across multiple disciplines.

ProjectWise Deliverables Management provides an “instant-on” cloud service for the management of transmittals, submittals, and RFIs. Backing this up, ProjectWise Transformation Service manages automated publishing and workflow-driven delivery of i-models and standardised content to project and field workers.

One of the products that Bentley was very keen for early adopters to use was the new Bentley Navigator Connect Edition, as it is an entry point into the Bentley world and for a relatively small amount per year provides some very useful capabilities, such as i-model viewing, clash detection and punch lists, features that many other firms charge thousands for. 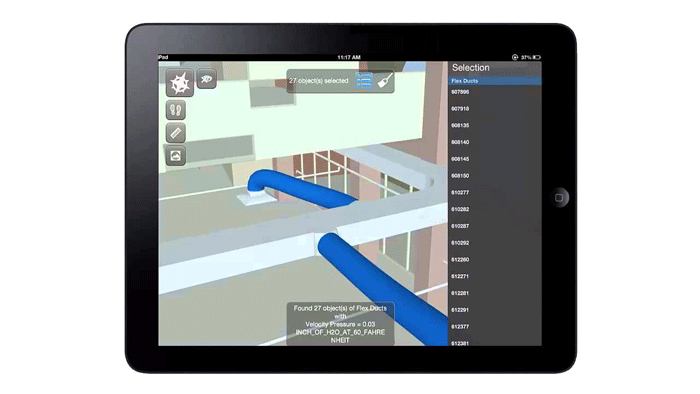 Back in February, Bentley acquired Acute3D and its software Smart3DCapture, which automates the generation of 3D models from high resolution photographs. These can be taken by mobile phones to DSLRs being flown around sites by drones.Acute3D makes it possible to fly over a city in a morning and have very accurate 3D geo-referenced mesh in MicroStation in the afternoon, with minimal intervention from the user. It is also possible to augment initial datasets with more close-ups and therefore get millimetre accuracy on buildings of interest. With the boom of Unmanned Aerial Vehicle (UAV) usage, site surveying is set to undergo a radical revolution, before, during and after construction. Greg Bentley said recently: “You can fast forward to when every engineering project will have a UAV operator on site. Up to now Acute3D has mainly worked on city-scale mapping using images from aircraft. But all of us can see how UAVs are going to make this applicable to site-scale.”

Bentley has not taken long to integrate the technology into the MicroStation Connect platform and the company is already using it to map at the city scale for several high profile uses.

One of the most interesting solutions launched recently has been ProjectWise Essentials, which is Bentley’s popular design management tool, cloud-based and leased by the quarter and designed for smaller firms (up to 40 seats). Access is immediate and users get to choose from a number of best practice templates, following standards, to streamline workflows and connect team members. ProjectWise Essentials provides version control, change management, document relationship creation, search and distribution. It comes with free Bentley Connections Passport access to the Bentley range of mobile solutions.

Access is secure and data can be accessed on or offline. This opens up the tool for those not in the Bentley ecosystem but looking for industry proven management and remote access solutions.

Bentley’s Connect Edition builds on all the work that the company has been doing since its inception in 1984. Despite the front end and the file format not changing all that much everything in the background has been re-written, re-worked, re-wired and turbo charged, against project road-maps that are longer than anyone else’s in the business.

To go for over 30 years and change the file format only twice, while delivering on-going subscription-based upgrades and several new generations of code is astounding.

The naming conventions can get confusing but it is best to think of Bentley’s portfolio as a platform-based modular system that can be configured and enhanced on demand. Connect Edition is not just about integrating the cloud but regimenting projects as collaboration spaces and ensuring that the right information is available everywhere at the same time.

Earlier this month news emerged that Bentley was filing at the New York Stock Exchange to issue and trade stocks.

Bentley has over $625 million in annual revenues and is currently the largest privately-owned software company in the US. This accolade looks likely to change as the company goes though the Initial Public Offering (IPO) process.

Back in 2002 Bentley attempted to float company shares and having gone through most of the process to make that initial offering, decided to withdraw the offer due to perceived weaknesses in the stock market.

Prior to taking over the family business as CEO, Greg Bentley founded a financial trading firm, which became part of SunGard Data Systems, an S&P 500 company, so Bentley has someone in charge who really understands the process.

The timing of the Bentley IPO could be a reflection on how subscription-based businesses are now highly valued. Subscription is something that Bentley has been doing long before it came into vogue and with ‘Select’ already has the infrastructure to deliver.

It will be interesting to see how this deal progresses and the amount of money the company can raise from investors; and to see what Bentley Systems chooses to invest it in.