As all the main AEC technology providers double down on their construction offerings, Bentley Systems’ recent acquisition of Synchro demonstrates the company’s commitment to 4D sequencing, scheduling and planning across all of its markets

Founded in the UK in 2001, Synchro Software was one of the original innovators in 4D sequencing. By the time Bentley Systems acquired the company in 2018, it had achieved a global presence from the UK to China.

At the time of the purchase, Bentley already owned ConstructSIM, which also had 4D sequencing capabilities. But as that software focused primarily on industrial plants the Synchro acquisition still made complete sense. With a broad footing in diverse areas it would allow Bentley to better address the requirements of those working on building and civil infrastructure projects. Importantly, it also took a much more granular level approach to the management of construction assets.

Bentley now plans to integrate Synchro’s construction modelling into its ProjectWise ‘connected data environment’. It also appears to want to retain the brand and desktop version.

Synchro was born out of a project called mid-city place in London, where Jaguar Land Rover logistics specialists were brought in to help plan and facilitate logistics improvements to reduce costs. The problem was that the consultants realised there just wasn’t the information available within the building industry to drive this logistical support.

At the time there was no planning system and no single source for the 3D spatial data to be co-located, so Synchro was born. Essentially Synchro merges and links the BIM digital twin with project information from a wide variety of disparate sources such as Excel, Primavera, and MS Project, providing feasibility insights, together with schedule validation tools. The story goes that the Bentley team worked closely with the Synchro developers on the Crossrail project and the synergy led to an acquisition offer.

During the presentations at Bentley’s Year In Infrastructure (YII) event in 2018, a stunning example of the use of the software was given by Nikken Sekkei, on the remodelling of FC Barcelona’s Camp Nou football stadium.

Due to time constraints and no alternative stadium being available, the remodelling work had to be done in between the matches and seasons, so construction teams had to be in and out, while leaving the stadium in a useable condition with everything meeting strict safety criteria.

Synchro was able to give the designers and construction teams a visual display of what work would be on each day. Nikken Sekkei built a digital twin of the stadium and used the defined timeline to break the jobs down to sequence around the game schedule. This included cranes, steelwork, planned concrete pours and on-site machinery. On the construction site, Microsoft Hololens is also being used to bring up the model while on site visits and used the site cameras to overlay the model phases. They also used machine learning to predict delays and see ahead.

Tom Dengenis, former CEO of Synchro Software and now senior director at Bentley Systems, highlighted a number of other capabilities and an interesting London-based case study. Showing a timelapse generated from a fixed view camera of a construction site, Dengenis overlayed the sequenced geometry from the digital twin, showing how it is possible to compare the work done to the sequenced timeline.

Dengenis told the story of the construction of London’s iconic Shard (72 storeys) and another project called ‘The Pinnacle’ (60 storeys) at 22 Bishopsgate, near Liverpool street. Back in 2005, both buildings were given planning permission. While everyone knows the history of the Shard, not many know of the Pinnacle. Looking at the two project’s timelines you could identify the three phases of each project’s construction: demolition, the creation of substructure and then the superstructure.

The Pinnacle project completed its demolition works one year before the Shard had finished its. Moving to the next phase, when it came to working on the substructure, while both projects deployed similar techniques and the footprints were essentially the same, the Shard, already a year behind, actually caught up with and overtook the Pinnacle. In only six months the Shard started the super structure build.

Unfortunately, both builds spanned the 2008 financial crisis. To accelerate the Shard’s build through the crisis, the engineering team deployed ‘top down, bottom up’ construction methods. Bishopsgate had one drilling rig operating at 80% capacity to make the caisson foundations. Meanwhile the Shard deployed three machines and started building up at the same time they built down and used Synchro to evaluate, refine and analyse the construction sequencing.

The Shard was completed in July 2012. At the same time the Pinnacle had only managed to complete seven-storeys of its concrete core and in fact, the project was abandoned. Apparently, the site has now been taken over by new owners and a new design and a new building is being constructed in its place. A pretty compelling London-based case study. 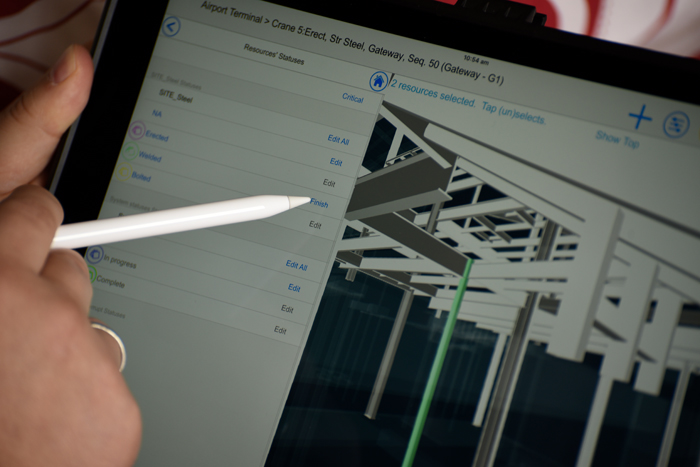 After a quiet period, while Bentley was potentially going for an IPO, the company has come out with a swathe of updates and has been back to acquiring technologies and industry brands. Synchro is undoubtedly a strong move into construction management and scheduling and an ideal product with which to engage with their consulting arm. Bentley engages well with asset owners, operators and tier one and tier two contractors and scheduling is deemed to be a key area for driving improved efficiency. The challenge will be how to get more firms to start using the technology regularly on projects and plan down to the incredible level of granularity to which Synchro is capable. It’s highly visual and could easily be misconstrued as an animation or viz tool. But that couldn’t be further from the truth. It allows for particularly detailed planning and buildings are getting increasingly complex.