The tapered castings that hold the glass panels on the Great Ormond Street re-development project are reminiscent of a gothic design which has been optimised using FEA (finite element analysis) the results of which were fed into DP to inform the final model.

Because NewtecnicÝs facade systems function structurally their work goes far beyond conceptual design and, as a result necessitates evolving a complete manufacturing methodology. To handle this level of involvement Newtecnic deploys Digital Project software, which was developed by Gehry Technologies and based on Dassault Systemes Catia V5 PLM system – the same software that is used by companies including Boeing and Toyota to design and build the worlds most advanced engineered products. 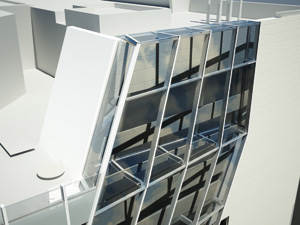 Andrew Watts explained his choice, ýThe ability to turn conceptual designs into buildable structures while retaining the precision of the original creative intention requires the equally precise methodology that DP parametric software provides. This tool is liberating because it allows designers to iterate the design within a set of flexible governing rules. Some architects reject this type of tool because they feel that it compromises their vision but at Newtecnic it liberates us by allowing considerable creativity within the rigour of strict rule based engineering discipline.¯

He continued, ýThe way modern buildings are designed has changed to accommodate ideas about how usage will alter over time. Consequently spaces are much more flexible and non-specific. This means that the mechanical services of a building will change along with the usage so a 3D building model is the ideal repository for the design because it allows changes to be made over time; effectively extending the design period over the life of the building. ýThe process of making buildings is becoming more complex and the tools such as DP are developing along with that process. Many architects have wanted to have this type of tool for years and now it is finally available. The ability to change a building while retaining the integrity of the design vision allows us not only to design faster and more easily but to show interested parties how the design is developing in ways that they can understand and make best use of.

Into the 4th Dimension

ýIn the past architectural drawings were impenetrable to most people but with DP we have the tool that shows exactly what we mean, including its environmental intervention.

ýDP also gives us the remarkable ability to include the 4th dimension – time. In real life we observe the world in time but traditionally architects do not include time because their drawings are static. The animation tool in DP allows us to describe the energy and drama of a design, which in a traditional 2D drawing may be stylish but actually gives nothing away.

It is not possible to draw in a way that includes time and therefore drawing will never deliver the whole vision. Time gives the drawing reality and also enables the practical advantage of communicating the details of a fa?ade system and how that will change to accommodate the shape of a building to all involved from the client and the occupant to the fabricator and the construction team. Another function of this feature is that it enables a view of accelerated weathering of a building over an extended time period, which is both fascinating and an important planning tool.¯

The DP infrastructure at Newtecnic was supplied by Gehry TechnologiesÝ UK representative, Desktop Engineering which has provided systems and ongoing support for other leading architectural practices including Zaha Hadid, SOM, Allies and Morrison and Thomas Heatherwick. Geoff Haines Desktop EngineeringÝs MD said, ýThe uptake of DP in the UK has accelerated over the past 12 months because firms in the AEC business have recognised that this software allows them to realise their vision by making designs buildable.¯Newtecnic has recently been working on the Gazprom Building planned for St Petersburg. Andrew Watts described the firmÝs work on the project, ýThe Gazprom Building work was won through a competition by RMJM against several of the worldÝs leading architects.

The design is based on a single stack rotated through 2.5 degrees multiplied over 5 towers. The whole building describes a twisted taper. The facade was developed in DP with a new system of shell-like panels across the faces of the structure. DP is being used to minimise the panel variation and to design the whole fa?ade system including the smallest detail. The ability to do all the work in one software package rather than having to jump between several makes the work flow much smoother and saves time in the design process. This is one example where DPÝs parametric methodology really shows its strength because changing one element automatically updates those related to it. 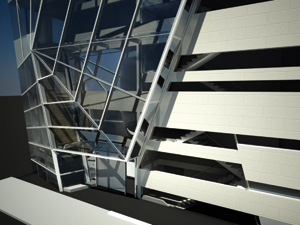 ýThe Gazprom tower is a mathematical model from which we can generate visual, engineering data and excel output that allows us to alter the building and its details while maintaining full control over the design and its associated reports. The model can be altered using excel, and vice versa, which provides us with greater design flexibility along with the ability to make multiple changes quickly. DP allows us to simplify complex geometric shapes and produce interrelated patterns from them. In the Gazprom Building for example shapes are laid out on a simple curve even though the finished model looks much more complex.

Andrew Watts is aware of the place that DP has in the history of tools available to architects and says, ýUse of DP is similar to the use of tools in C15th gothic churches ± callipers, plumb line and a set square, with which builders created magical effects, DP is simply an up to date tool. There is a continuum of ideas and tools in architecture even though many people treat history as a free toyshop rather seeing themselves as adding to the wealth of past experience. 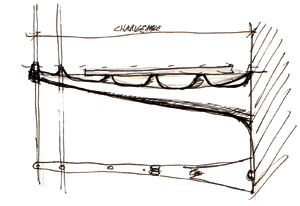 ýLike architects of the past, Newtecnic works with companies that fabricate building components and physically construct buildings so our work goes far beyond conceptual design. Currently this is unusual practice because division of labour often creates a separation between designers and those who carry out the labour of construction. DP allows everyone to be part of the building process and to take from the model that which they need to effectively and efficiently manage their work.

ýDP allows us to quantify what we have in our heads and shows you how to build the building and its constituent parts. It puts us onto a strong position throughout the design-to-production process by enabling a complete and totally accurate project vision.¯ 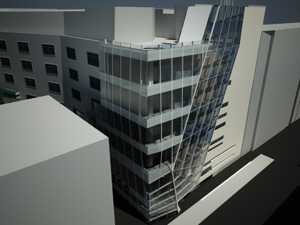 At Great Ormond Street ChildrensÝ Hospital Newtecnic is working with leading architects Llewellyn Davis Yeang, on a folded glass facade with Newtecnic producing detail designs from concept to component. Interestingly the tapered castings of one design option that hold the glass panels are reminiscent of a gothic design which has been optimised using FEA (finite element analysis) the results of which were fed into DP to inform the final model.

Andrew Watts commented, ýOur brief was to create a folded glass wall design including final fabrication and construction details. An original wireframe model for the building was provided and input to DP. The parametric capability within DP allows us to change the design easily to fit with the demand of clients, designers, planners and others involved in the process. The final design will be a lovely crafted, friendly building that is sensitive to the functional and emotional needs of its users. It will be appear modest through the use of appropriate components. DP has allowed us the design freedom to achieve this level of sensitivity along with absolute technical rigour so that the structure and its components are guaranteed to be fabricatable.

In conclusion Andrew Watts said, ýDP is able to reveal the complexity of a design in a simple and readable way. It helps to make things straightforward.

This saves hours of talking and explanation because we can show what we mean in a split second.¯