In late September BIMobject hosted its annual event for customers and users in Malmö, Sweden, and broadcast live over the web. With presentations from manufacturers, consumers and the company’s CEO and CTO there was little doubt of the momentum behind downloadable BIM content.

By October 2014, BIMobject had 3,750 products for download from over 280 companies. In just two years it has amassed over 1,183,000 downloads by a registered user-base of nearly 60,000 customers world-wide. In that time the company has been floated on the Swedish stock exchange, established six subsidiaries across Europe and received a considerable investment from Hexagon Geosystems, owners of brands such as Intergraph and Leica.

It seems BIMobject has velocity. 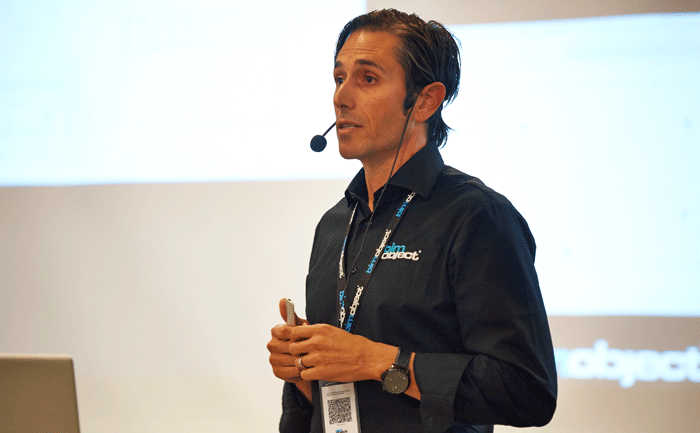 The BIM components can be simple models or complete assemblies, from a door to a lift, a brick to a curtain wall. These objects are placed within the BIMobject portal for free download by AEC designers.

Each CAD system has its own BIMobject app to enable direct access to BIMobjects from within that system. Users can request more information via BIMail and the system can warn users when products have been superseded. The use of objects is tracked through the BIManalytics service, so it is possible for manufacturers to measure the return on investment. A message centre enables several people to work in the same system and share information.

The new BIMobject HTML5 interface is common in all of the major BIM systems, including Trimble SketchUp

BIMail also enables contact with consumers and there is a hook up to Salesforce.com. Manufacturers can have a private cloud for their own components.

BIMobject’s flexible back-end system appears to be its key differentiator. Looking beyond the download, the system can identify sales pipelines and projects where products are currently specified.

BIMobject CEO Stefan Larsson kicked off September’s BIMobject LIVe event in Malmö, Sweden, with the news that Hexagon had bought 31 million Swedish Krona worth of stock, equating to 13% of the company, and that the company had recently achieved 1,000,000 downloads. After explaining its evolving product offering over the last two years, he introduced a new online tool called Mosquito, which will potentially capture and distribute BIM objects faster than ever before.

BIMobject Mosquito is a radical new web technology that allows developers, partners and manufacturers to create BIM objects directly on a cloud server without any CAD or BIM knowledge.

Using Google X (WebGL), the user is presented with a live 3D representation of a rectilinear object, onto which a bitmap can be added and scaled, with height, width and depth input. This can be done one at a time or through a bulk load option, which also supports Excel /spreadsheet data, enabling mass creation. The Mosquito technology will then automatically create native files for ArchiCAD, Revit, SketchUp and IFC.

BIMobject Open Property Cloud technology, or BOPC (pronounced bops), was also released at the event, providing a way to add extended properties to objects, such as parameters, metadata or attributes, via the cloud. BIMobject sees this technology as a way of future-proofing objects to adapt to future standards by enabling the addition of properties post-creation.

BOPC also enables manufacturers to add additional properties to their objects, or add hidden properties to objects to drive logistics and purchasing at a later stage in the process. An owner of a BOPC can create unique user groups to limit access to the information; to a design team for instance. 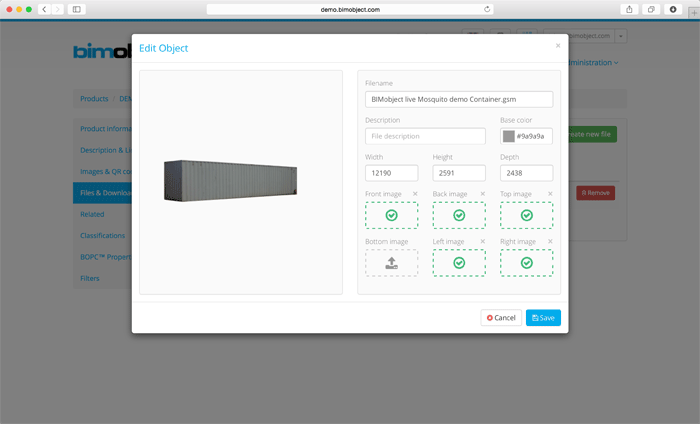 Mosquito is limited to rectilinear object creation. Here a shipping container is being created with the web-based application, applying images to each face

Another use could be adding properties to a component, which applications like Solibri could use to check compliance with installation limitations of items like doors (clearance) or air conditioning (clear space requirements).

BIMobject provides Apps for designers to access the BIMobject portal from within a number of CAD systems. Due to huge variety in capabilities between the vendors, the firm moved to an independent method of presenting this access, with a consistent look and feel. The new HTML5 tool palette is very clean looking and is the same throughout Revit, SketchUp and ArchiCAD.

Talking with manufacturing-based customers, it is clear that many firms initially created BIM content for marketing purposes, but when it comes to the post-download phase, the majority were still getting to grips with bringing the rest of the company up to speed. To have 10,000 downloads is impressive but it is only the start of joining up the dots. Not enough manufacturers understand BIM, its implications or the benefits to having virtual product catalogues online.

An Ikea cabinet system is rapidly modelled, detailed and placed in an office setting

After knowing that your company’s products have been specified in a design, the key issue is to ensure that they stay in the design through to order, according to one manufacturing client. The company has found that, all too often, its products were the preference of the architect, but were replaced for a cheaper solution late into the design.

Before the BIMobject system, the firm did not even know it had missed out on the opportunity. Bigger picture BIMobject supports SketchUp, which is amazingly popular but not what we would define as a professional BIM system. However, SketchUp is increasingly used by BIMobject’s customers, and it plays an important role in the conceptual stages of many projects. The word is that Trimble, which acquired SketchUp from Google, will be redeveloping SketchUp to have more BIM characteristics, although details of this are ‘sketchy’.

It was at this point that it struck me that it would be possible for a Revit user, a MicroStation user, an ArchiCAD user and a SketchUp user to work together in ways that IFC could only dream of.

IFC is a lowest common denominator format, but it handles basic components like walls, slabs and columns. If the lead designer of my Frankenstein BIM design team was connected to the other proprietary systems, IFC could share these basic generic components, but each time a BIMobject component was inserted in Revit the corresponding component would be downloaded by ArchiCAD, AECOsim and SketchUp. It would also mean that an IFC-only BIM system is probably all that is missing here.

The major CAD vendors spent years, if not a decade, defining all the standard objects that could be used in today’s BIM systems. Meanwhile, the BIM component industry has been going for a lot less time, but is now doing a great job of getting real-world manufactured parts in the common BIM formats.

At some point in the process, designers will want to use the manufacturer’s parts instead of having to fill out data for generic components.

It is possible that the next generation BIM systems will require a lot less development time, as the manufacturers’ models and systems have already been converted to intelligent BIM objects and just await insertion.

There remain hurdles to adoption for many potential BIMobject users. For manufacturers there are the internal hurdles of educating employees and getting the sales teams onboard.

Another issue is the sheer size of the product portfolios to be turned into BIM objects. Many companies are trying their first few, some I talked to had as many as 400, which doubled to 800 as many had opted to supply these in two popular BIM formats. There is still many tens of thousands of manufactured objects that have yet to be digitised.

BOPC extends the data and richness that can be contained within objects and the cloud enables this to be done dynamically. I suspect we will see this technology leveraged more obviously in the future as people realise how best to use it.

Meanwhile, Mosquito is a demonstration of what is to come. When you combine this technology with real-world capture solutions like Autodesk’s 123D Catch, which can create a textured 3D model from a handful of photographs of an object, you soon realise that it may soon be possible to photograph the real world to produce a 3D model and supercharge the process of creating non-rectilinear BIM components on the web.

BIMobject continues to grow at pace and now, with even more cash injected by Hexagon, one wonders where the company’s technology will go next?

Will the intelligence lie in BIM design tools or the downloadable real-world content?

Bravo, maestro!
The numbers don’t lie
From art to engineering - bringing Rigoletto to life
The road to digitisation
The new world of rapid site design
BIM for small projects
Working as one
Graphisoft Building Together virtual conference
Advertisement
Previous Post
Next Post