When it comes to addressing gaps in the BIM chain, it’s time to take a look at construction verification as a way to add long-term project value, says Michael Johnson, a senior BIM consultant with chartered surveyors Plowman Craven

Above and below Construction verification errors

From the introduction of CAD in the late 1970s to the latest innovations in BIM, I’ve spent the last 35 years following the development curve and uptake of digital workflows.

And as senior BIM consultant at leading chartered surveyors Plowman Craven, one of the most technically innovative companies in the field, I have a personal interest in ensuring that investments in BIM made by clients and their delivery teams have real-world value throughout the design, build and manage stages of an asset’s lifecycle.

It strikes me that, despite the great advances that are being made in the use of PAS-1192, federated models and LOD/LOI, the fact remains that, in most cases, BIM could be said to stop when the first steel is erected.

The reason for that, I feel, is that many still see BIM as existing only inside a computer or, at best, as a federated model supporting 4D and 5D processes.

This needs to change. As the industry continues to improve its understanding of where and how BIM can help to improve design coordination and identify potential issues before construction starts, the real challenge we now face lies in auditing and recording exactly what has been constructed against what was designed.

But that raises an important question. In addition to demonstrating that contractual obligations have been met, what might be the other commercial advantages of having documented, independent certification of the positional accuracy and content of installations?

For VDC [Virtual Design Construction] and BIM managers, a construction verification workflow could be hugely beneficial, providing a great new data tool to validate the accuracy of recently completed work against the construction PIM.

With large construction projects increasingly using a PAS 1192-specified BIM that demands LOD500 or an ‘asbuilt model’ of the completed facility, the use of laser scanning in construction is already exploding. We see construction verification as a great opportunity to contribute to an industry-wide improvement in standards, efficiencies and cost savings.

In addition to monitoring construction progress against programme milestones, construction verification – if carried out at pre-planned construction stages – could assist the supply chain in discharging some of its responsibilities surrounding ‘as-installed’ model data.

I’m convinced, in fact, that construction verification can play a significant role in the early recognition and subsequent mitigation of some of the everpresent and costly delays, re-works, package creep and legal and financial issues that blight our current processes. It might bean obvious question, but what impact might a reduction in contingency have on work-won ratios and tender return prices?

Using this new workflow while working on some of London’s landmark buildings has enabled the team at Plowman Craven to identify the critical stages where construction verification adds long-term project value. Our conclusion is that it really does have the potential to change the way projects large and small are executed, reducing risk and potentially saving millions of pounds in change orders and costly reworks.

In addition to clients viewing construction certification as a kind of ‘insurance policy’ against potential variation claims, we are witnessing an increase in the number of developer and end-user clients who see it as a method of proving conformance to contractual tolerance set by the design teams. It’s also a way to avoid duplication of work caused by multiple subcontractors commissioning surveys to validate the work, produce as-builts or check defined tolerances.

As BIM Level 3 moves from its current embryonic form to a better developed, more clearly defined tool, data and verification will play an increasingly important part in our future deliveries. Dr Ioannis Brilakis, a lecturer at the Laing O’Rourke Centre for Construction Engineering at Cambridge University, has aptly described the next level of BIM as ‘as-is BIM’.

Being a technically-led company, we are constantly looking to improve on accuracy and automate processes where possible. In line with these goals, we are currently combining our historic project experience with that of sector software specialists to automate where possible the key activities of ‘capture, verify and report’.

We have recently been involved in a London-based project where the tolerance and position of steel frames were of paramount importance. As such, we were commissioned to carry out construction verification of the steel and concrete packages.

The purpose of the project was to verify that the steelwork construction was within 25mm tolerance of the design, and that it included the penetrations required when federated with the steelwork model.

To achieve the desired outcomes, we laser-scanned and photographed the site and processed the data in Leica Cyclone, before converting the data to an Autodesk ReCap (RCS) file format – and that was the easy part!

The next step required the federation of the point cloud into precisely the same place as the PIM, despite different origins being used in the real world and the model world. In my opinion, we are now – as surveyors – adding real value to money invested in BIM by using the model data to audit reality.

Having reviewed the data within Navisworks, we were confidently able to compile an independent construction verification report, complete with snapshots, descriptions and locations, supported by a TruView visualisation model.

Our client was encouraged by the results and is confident that the early identification of minor differences will be accommodated by agreed design changes – with less impact on a complex construction programme than might have been the case previously.

Another recent example came about when Plowman Craven was commissioned by a leading London developer to assist in the monitoring of complex services as they were installed in a prestigious development in the capital. As each basement construction was completed on the 19-storey building, it was 3D laserscanned and a coordinated comparison made with the structural and services design.

The ability to understand differences or clashes between ‘as built’ and design enabled critical alterations to be made to the design, as well as physical changes to be made on site, both in a timely and cost-effective manner. Ultimately, this led to fewer RFIs and smoother contractor handovers, again proving the tangible benefits of this invaluable process. 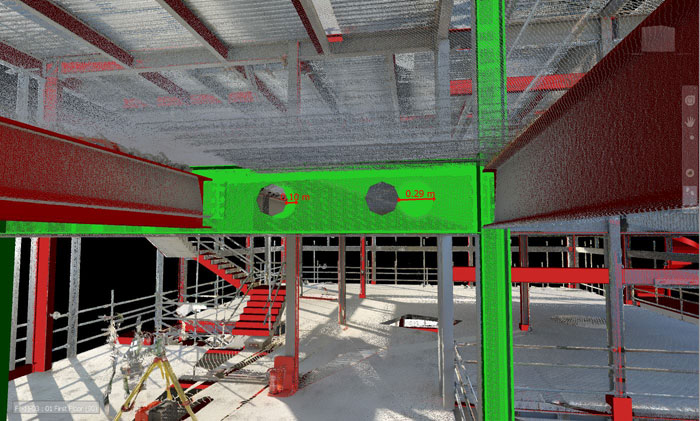