Frank Gehry’s Catia-based Building Information Modelling system, Digital Project, has been a slow burner since its launch in 2002. Martyn Day discovers that combined with consultancy, the software is being used on an increasing number of complex buildings.

The launch of Digital Project in 2002 brought Frank Gehry to Paris to join Dassault Systemes’ (DS) chief executive Bernard Charles on stage,to announce the intention to develop a high-end 3D software tool for architects, structural engineers and construction managers. The software was to be called Digital Project and it would be developed on top of DS’ flagship modelling solution Catia, which was mainly used in aerospace and automotive design. The combination of signature architect and ‘the Ferrari’ of CAD system developers certainly made for great headlines at the time.

Gehry’s ‘deconstructivist’ designs are legendary, as is his unusual design process, which involves lots of scrunched up paper. These paper models have to somehow be translated into documented designs and then built. Gehry, now 80 years old, is proud of his lack of technical knowledge, admitting he wouldn’t know how to turn a computer off or on, let alone use it. Instead, in 1992 his practice recruited some of the best and brightest young architects to join the team and use every technology under the sun to realise these complex projects.

For a considerable part of his life, many of Gehry’s designs were deemed too expensive to build, mainly due to the complexity and huge number of unique components required. At the launch Gehry stated that by using the latest in modelling technology, his practice was finally capable of getting reasonable quotes in from contractors due to the explicit nature of the models that could be provided with the request for quotation. The contractor’s bids also all came within one percent of one another. Using this technology, Gehry claimed that he could make a curved wall for practically the same price as a straight one. The aim was to integrate the design to construction phase without the need for paper.

The most common methodology that the practice developed is based around digitising Gehry’s paper designs by scanning them in to Catia as point data and then building the structural and facade systems that would support it. It is through this methodology that Gehry really started to define a process that would allow it to move away from 2D documentation and rely mainly on 3D models. At the same time this ushered in a different way of working with contractors and required the rewriting of standard contracts. Without knowing it at the time, Gehry was defining Building Information Modelling (BIM) and experimenting with producing best practice.

The additional technology layers that were being created in-house to better adapt Catia for architectural work proved also to be the foundations of Digital Project and an additional business unit.

In 2002, Frank Gehry and his team also founded Gehry Technologies (GT) aimed at bringing the in-house technology and methodology advances it had made to the wider architecture and building industries. GT comprises a team of architects, engineers, and construction professionals, computer scientists and management consultants.

The original concept was to create a CAD system, based on a Catia core that could be resold around the world. However, GT had little knowledge about reseller channels or selling software, and the solution it developed was anything but low cost. Because the technology had been proven on Gehry’s own projects, the thought was that other leading design firms would be open to adopting the new CAD system. Unfortunately, this wasn’t to play out.

The more traditional CAD vendors such as Autodesk, Graphisoft, Nemetschek and Bentley Systems offer shrink-wrapped 3D solutions. The truth was that many other architects had been experimenting with 3D as well as other advances and a number had gone some way to adopting either a more common BIM system or had developed ‘work-arounds’ using scripting or other form-based design tools. Those firms that were interested had concerns on the availability of people who could drive it, without extensive training. The thinking that Digital Project would be a fast success soon became a false hope.

There have been some big successes with the software, however. Skidmore Ownings and Merrill (SOM) acquired 100 seats and Zaha Hadid has a number of seats in-house, to name but two. The issue appears to be that architects are opting to not use just one system anymore but use any number of applications depending on what the project requires.

GT has been doing very well as a consultancy firm in its own right with many architects opting to call in GT as consultants for complex design projects. This has led to Digital Project playing an under-cover role on a considerable number of high-profile projects. As the architectural vocabulary expands to include ever more complex forms, and as digital fabrication reduces the cost, the demand for new in-house skills greatly outstrips the supply of people with the necessary 3D and BIM experience. The key benefit of BIM is its ability to reduce the inherent risks of innovative designs, by addressing much of the risk associated with routine errors and omissions. Basic errors get caught during the design process by using 3D.

In a typical poorly co-ordinated set of 2D construction documents, by comparison, errors may not become apparent until on the construction site. A properly structured model will ensure that the whole process runs more smoothly. 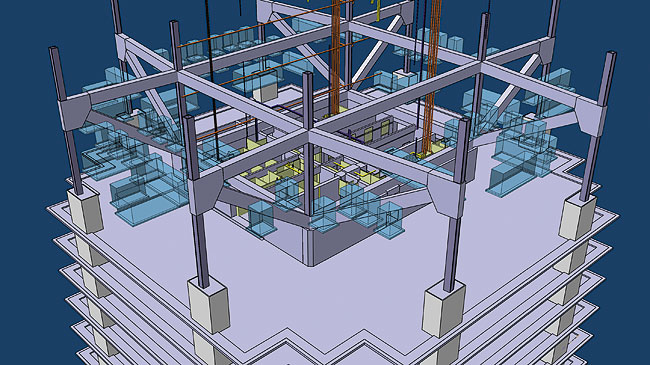 Gehry Technolgies uses Digital Project to model all structures in a design, from steelwork to concrete. In turn this can assist planning the construction sequence.

GT offers a broad range of consultancy services to get complex projects built. The development of a base project model is the initial stage of GT’s project modelling services. The project master model assembles all relevant two-dimensional and three-dimensional project information into a common project database, which allows for the compilation and easy retrieval of project data, and rapid visibility and decision-making.

Using this base model, cost planning and control can be derived directly from the master model, and linked directly to published or internal cost data. No need for time-consuming and potentially inaccurate manual takeoffs. This information can be used for project cost planning and provided as a basis for subcontract bidding.

All the geometry in the Digital Project model can be linked directly to project schedules developed in various applications, to create so-called 4D Models, which integrate both the design and schedule information. Resource loading can be projected from quantities extracted from a master project model on a basis of associated project activities. The model can also be used to visualise and analyse multiple construction phasing strategies. This can be used to establish and verify payment schedules for completed phases.

The more commonly used contracts do not usually apply with a comprehensive BIM project and here GT can provide support for numerous contractors and subcontractors, establishing the scope of different participants’ responsibilities, removing the ambiguity and potential inconsistencies that may occur.

GT can offer analysis and simulation of site logistics, the modelling of foundation and excavation scenarios, analysis of construction sequence alternatives and ‘digital mock-ups’ of alternative primary structure and curtain wall system designs. Clash detection is also automated within the system and workers can be trained using 3D simulations to enhance on-site safety.

Having created a master 3D model, it is possible to compare the digital design with the ‘as built’ reality, to assess the quality of the build, or identify any errors. GT can provide detailed on-site digital surveying and measurement technologies to compare, as well as establish any grading geometry.

Digital Project has become a business in its own right for Gehry, although the early high-hopes for it to become a volume player in the 3D architectural world were perhaps a bit over optimistic. With progressive software revisions, GT’s technology and considerable in-house experience in BIM best practice, it seems that through consultancy, Digital Project is contributing a valuable, multi-faceted role on signature global projects, such as the Beijing National Stadium (the Birds Nest), Lou Ruvo Brain Institute and the Lincoln Center Alice Tully Hall.

With each successful project, GT is proving the value of its construction and process know-how, together with establishing Digital Project as a field-proven BIM modelling tool. This is finally leading to increased software sales and ongoing engagements for GT, as it continues to educate the market as to the benefits of modelling, reducing project risk and solving thorny issues of today’s complex designs.