At BIM training company White Frog, director Paul Woddy admits that the company has always been “well behind the curve” when it comes to its hardware set-up.

In some ways, he says, there’s been a perfectly valid reason for that: Woddy and his team always need to consider the spec of the machines that clients will use to run White Frog’s training courses. After all, these clients run the gamut from schools and universities to professional training centres run by software resellers and in-house training labs at major companies including Arup.

In other words, there’s a wide range of budgets and technical know-how to bear in mind. Every course, including the Revit models with which training exercises start and finish, must be able to run on the machines available to every customer.

Since trialling the compact HP Z240 SFF workstation, however, Woddy’s had a bit of a rethink. While he still can’t afford to be complacent when it comes to customer needs, he was impressed by the impact that this hardware upgrade had on productivity at White Frog.

“It sounds obvious, but performance improves the efficiency of how we can produce materials,” he says. “For me, it’s been a wake-up call. Our perception that customer machines are lower spec is probably not a big enough issue to hide behind, in terms of under-speccing our own machines.”

Software requirements for staff creating courseware at White Frog include Autodesk Inventor, Navisworks, 3ds max and, of course, Revit. Many of these are constantly open and running simultaneously on multiple displays.

With the HP Z240 SFF everything ran faster, says Danny Danby, White Frog’s Technical Services Manager, “from turning on the computer to launching Revit, saving files – everything like that. When you’re not used to it, you can really tell the difference.”

Adds Woddy: “It didn’t matter that we were running Inventor in the background [ray trace rendering] and modelling in Revit at the same time. There was no slowdown.”

That was a big change, he adds, from the experience he’s had of using White Frog’s existing workstations, especially when using the HP Z240 SFF’s AMD FirePro W4300 GPU to navigate large 3D models. “Usually, there’d be a heartbeat before you could see what you were doing or click a button to carry on working and that was down to the time it took to redraw the model on the screen. But with this machine, there wasn’t any pause, no matter how big the model. I didn’t see any slowdown at all.”

For the purposes of the trial, White Frog focused on a 100MB Revit file from a hospital project. “For us, that’s a small to medium size project, because we can easily get up to 500MB projects. But we felt 100MB was a decent-sized test: a lot of people try and stay under that for model size, because once you go above it, you need a different set of protocols on how you manage [the model].”

These tests highlighted the stability of the HP Z240 SFF. In the past, Woddy has seen his graphics card fall over and self-recover when it’s been pushed to its limits by Revit, “but [with the AMD FirePro W4300] I haven’t experienced that once on the HP machine,” he says. Nor, he adds, did noise levels rise beyond a barely noticeable hum. 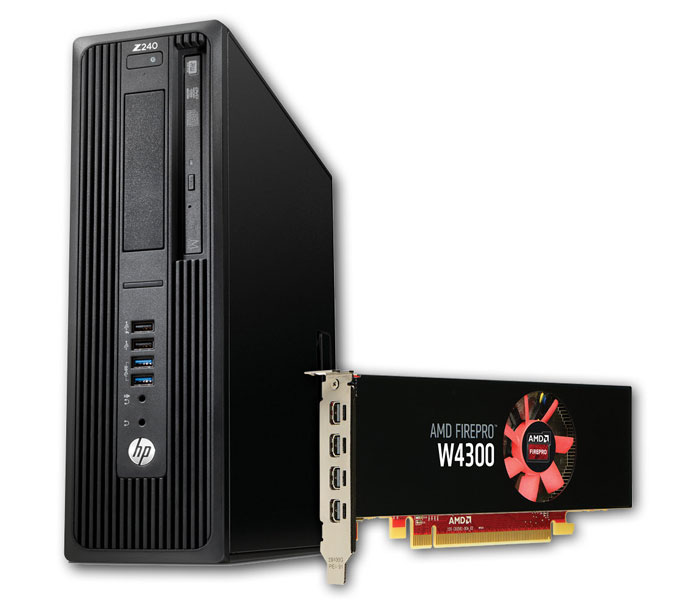 Thanks to the low profile AMD FirePro W4300 GPU, the HP Z240 SFF is significantly smaller than most workstations, measuring a mere 100 x 338 x 381mm

The compact chassis was a big plus for the HP Z240 SFF, too: “It’s been beneficial because it’s about half the size of the machine I’ve got, so I’ve got a bit more desk space,” says Danby. “It just disappears,” says Woddy, “and it saves me getting my knees clipped by a tower under the desk!”

Smaller size means greater portability, too, and Woddy can certainly see the advantages of that: “If we were going to set up a training lab [at a client site], it would be an alternative to laptops.

” White Frog’s experience with the HP Z240 SFF is likely to inform the hardware recommendations the company makes to customers in future, he continues. After all, under speccing of customer machines isn’t the only problem the company encounters. Sometimes, it’s quite the reverse: a budget is allocated to set up a training lab and “the IT guys go mad”, even in schools.

By contrast, the HP Z240 SFF, he says, “seems to be a perfect little box in terms of containing all the important stuff that makes a real difference to the user without going crazy. This machine can handle as big a [Revit] project as I’ve ever seen and, in terms of what you might like to throw at it, it’s very impressive.”

WIN: One of two HP workstations with AMD FirePro graphics

DEVELOP3D and AEC Magazine have teamed up with HP and AMD to give you the chance to win one of two powerful workstations, perfect for 3D CAD.