With dancing chairs, spinning tables, and elaborate performances from candelabras and cutlery, you could be forgiven for thinking this visualisation was a scene from a Disney film. Instead its the latest addition to Lancashire County Cricket Club’s legendary home.

The Point is a purpose built events building giving clear views across the pristine wickets of Old Trafford.

The Point is a purpose built events building giving clear views across the pristine wickets of Old Trafford. A multipurpose main room is designed for match day hospitality — with unobstructed views and table seating for 1,000 guests — or private events such as weddings, conferences and exhibitions. 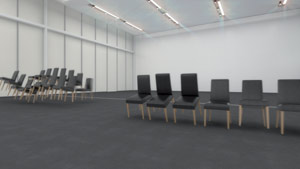 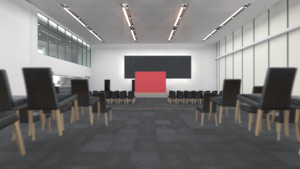 Salford-based Motion Imaging (or Mi for short) was given the task to show off all these uses and more in a short film. Having worked on providing the aerial views for the planning applications, it was well situated to move on to the architectural fly-through, but wanted to make more of an impact than a typical show reel. “It was going to be played out at an events evening, but architectural fly-throughs, by definition, are not very exciting,” deadpans Mi managing director Anthony Hartley-Denton. “So the first hot point was to try and do something a little bit different.”

New creative director Clive McNeal soon got the main room dancing with the addition of some toe-tapping music, instantly transforming the atmosphere from the typical ambient mood given to fly-throughs. Next to move was the furniture, in order to demonstrate the variety of purposes and the ability to shut the room off into quarters with moveable screens.

Google SketchUp files were obtained from the architects, but the firm chose to build the model themselves in Autodesk 3ds Max, adding in such features as bars, platforms and, of course, sashaying tables and chairs doing Mexican waves.

“If you do something that smacks people across the face a bit and grabs their attention, usually it will get a few raised eyebrows and people will watch it,” says Hartley-Denton.

The 3ds Max data was rendered out into V-Ray, but Maya was used to build the run through, point caching the animation. This compresses the fly-through timeline, crunching all the data down so the object holds its own animation data. “It’s like a point-and-shoot method, but it has to be run in another package, with Maya much better for simulation and animation,” explains Hartley-Denton.

The dancing chairs certainly made their mark, mesmerising guests with their jiggling feet, and the display was given really good feedback at the event.