There’s been lots of talk about automation in construction and specifically the use of robots on site. At this year’s NXT BLD, Boston Dynamics brought SPOT Mini to demonstrate that these are indeed the droids that the industry has been looking for, writes Martyn Day

The concept of robots and their potential to do the work of mankind has been with us before the 18th century. An inventor Wolfgang von Kempelen toured Europe with a ‘Mechanical Turk’, which allegedly beat Napoleon and Benjamin Franklin at chess, although this tuned out to be little more than a bloke hidden in a box of clockwork gears. In 1921 Karel Capek’s play coined the name Robot, from the Czech for ‘forced labour’ and from then on robots have played a major role in our dystopian views of the future both here and in galaxies far, far away. Nobody mention Westworld…

The reality of robots in the workplace has been far less exciting and mainly incredibly static. The most deployed form of robot in fabrication is the multi-jointed robot arm, which is a common sight in assembly plants around the world. These are static and perform repetitive, cellbased tasks, to very prescribed routines, which do not lend themselves to construction sites or uncontrolled environments. All this is about to change.

Boston Dynamics was formed in 1992 and is a spin off from the Massachusetts Institute of Technology. It is currently owned by Google X (a subsidiary of Alphabet). Through funding from DARPA (Defense Advanced Research Projects Agency) it has built many different types of mobile robot platforms, from quadruped (BigDog, Cheetah, LittleDog) to bipedal (Petman, Atlas) which are also anthropomorphic, moving dynamically with human like mechanics. I am sure you have all seen the videos of these machines going through their paces and being pushed, cajoled and generally physically abused to show how reactive and self-balancing they can be.

The company’s latest robot is also its fi rst commercially available product, SPOT Mini is a compact, quadruped ‘dog-like’ robot which stands at 0.84 m, weighs just 25-30kg and can come with an articulated arm and grabber. It has enough juice to run for 90 minutes and actively maps its environment, avoids obstacles, can walk, trot, climb stairs and, in the online videos we have even seen, can open doors, load a dishwasher, walk autonomously around construction sites and even do moonwalking while dancing to Uptown Funk. This is an exceptionally capable robot and Boston Dynamics recognises that it has a cornucopia of potential commercial application areas, including construction.

We were exceptionally fortunate to have Boston Dynamics send a team over to the UK to present and demonstrate SPOT Mini to the NXT BLD audience with Michael Perry, VP of Business Development giving our keynote. It wasn’t all plain sailing. With the vagaries of British customs procedures we only got the all-too-essential batteries that power SPOT out of customs and delivered to London with a few hours to spare before the event.

We thought SPOT Mini would be popular, but had no idea just quite how much of a frenzy it would generate at the conference! As SPOT walked down the side path and mounted the stairs to the stage, mobile phones and iPads were raised to capture seeing SPOT in the ‘flesh’.

Boston Dynamics explored many different types of robot which could move, navigate and deal with challenging environments but SPOT mini came out of an approach to develop a mobile platform which could operate both in humanpurposed environments, inside buildings, factories as well as outside and on building sites.

Boston Dynamics quickly identifi ed that there was an opening in terms of inspection and surveying, a repetitive task in sometimes hazardous environments. With the increasing digitisation of construction, there is a growing need for more data, more regularly. While sensors and cameras can be fi xed on site, and there is no shortage of drones, both options have restricted mobility inside structures.

SPOT is omnidirectional. It can climb stairs, move side to side, strafe, stretch, move side to side, walk backwards and even lie down. It can negotiate environments using its fi ve stereo camera pairs to photogrammetrically ‘see’ its surroundings and navigate to points on-site and position its payload sensors wherever it needs to be.

The robot has three different payload ports on the back that provide power and comms to external processors. There is wide spread spectrum radio too which gives it a long-range communication distance and the company has also done tests beaming 5G/LTE from the back of the robot. The manipulation arm, with camera in its ‘palm’, sits on top of the robot’s back and takes the robot from just being able to sense the world to also interact with the world and do a wide variety of tasks. Using kinetic modelling the arm is easy to manipulate for grabbing, reaching and even has what they call ‘chicken mode’, with the arm acting like a stabilisation gimbal, staying still and level irrespective of the body movement.

As SPOT is a platform, it has a full API where developers can access the robot’s sensors and locomotion controls, enabling a wide array of autonomous behaviours and tasks, such as inspections or carrying out a laser scan, depending on the payload. It would be possible to program in an autonomous survey of a site on a daily basis for construction verifi cation, and compare the data, even if SPOT had to open doors in the process!

Last year Boston Dynamics built twelve SPOT Minis in house, mainly for testing but at the beginning of this year it went out to contract manufacturers for a series of beta builds. With its partners in Japan and America, Boston Dynamics has already tested the abilities of SPOT Mini on Takanaka construction sites in the snow, inspecting dangerous kilometre long tunnels in Japan and walking around San Francisco airport Terminal 1.

With Boston Dynamics bringing SPOT to the UK and NXT BLD being specifi cally for advanced digital construction, we contacted a few laser scanning companies to come and meet the Boston team. The appetite to work with Boston Dynamics initiated a huge response. We had teams from Faro and Topcon come to NXT BLD to see the robot and talk about combined development strategies. Faro even 3D printed a bespoke attachment plate to the back of the robot, so it could mount its Faro Focus scanner in the exhibition space. This live R&D generated the fi rst laser scans from the SPOT Mini platform from the two providers. There were some initial concerns that the vibration of the robot’s internal fans may impact the scans but the great news was that the output was as good as it would have been were it mounted on a tripod. SPOT could walk about a site and stop at specifi ed points to carry out all the scans required for a survey. The only potential issue is that SPOT’s height is lower than a tripod, so in a busy environment, it may generate more voids where information isn’t captured. 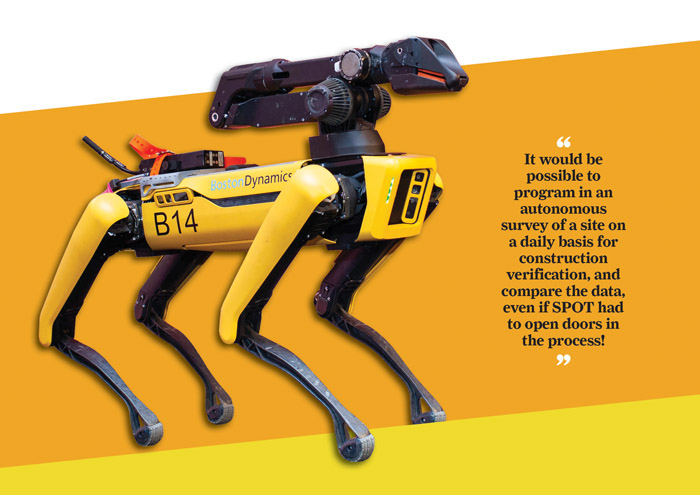 For NXT BLD, Faro 3D printed a bespoke attachment plate to the back of the robot to mount its Faro Focus scanner Image courtesy Matt Mccarter

Obviously, the inspection market has massive potential for automated data collection. Perry explained that mining, nuclear power stations and other hazardous environments were all obvious targets for SPOT Mini application.

Given the reaction from developers in construction, we can confi dently predict that SPOT Minis will be deployed to construction sites all over the world, helping further drive the digitisation of the building industry. From NXT BLD coverage we have connected Boston Dynamics with a whole host of interested parties, including Bentley Systems’ Synchro team, various SLAM scanner developers and the construction division at Tesla’s Giga Factories.

When and how much?

By the end of July 2019, Boston Dynamics had made 100 beta SPOT Minis and this summer it will be putting these beta robots through hundreds of hours of cycle times each week to tease out any remaining hardware and software faults before they go into mass production. SPOT is due to ship very soon and will cost less than $100,000 per unit, and we understand there will be leasing options.

The digitisation of the construction industry has only just started but it’s snowballing as venture capital money is injected into research, fabrication and productisation. As skilled labour becomes harder to fi nd the industry is looking towards automation.

Construction firms are setting up factories with an eye to deploying robots to fabricate components to bypass the skills shortage and reduce on-site construction time.

With increased used of laser scanning and the potential of robots like SPOT carrying out continual mapping of sites, when combined with advances in AI-driven image recognition, increases the viability of introducing bigger robots for heavy lifting for placing of components such as walls and steel structure elements, or to drive a concrete 3D print nozzle on a ‘smart’ site.

As science fi ction becomes science fact, the very nature of the construction business is about to fundamentally change.